Facades Architecture.
Fascination of the Faces of Buildings

In architecture, the term facade refers to the outwardly visible wall surfaces of a building, including windows, doors and the likes. Materials are often concrete, glass, wood, brick or masonry made of sand-lime bricks. But for Michael Nguyen, they are not just that inanimate materials or elements. They are like the face of a human, like the shape of body, or the clothes, which communicate with the other humans and tell stories.

That’s why in most of his photographs, Nguyen does not show an overall view of a building, but a look at the details and particularities. Just like when we approach a person and have a chance to look closer, we see their beautiful eyes, we hear their unique voice from those open lips, or sometimes just an interesting pattern of the dress they wear attracts us.

With these settings in mind, look at the photos of Nguyen. Buildings are not static objects with five facades, four side walls and the roof. They are lively, dynamic sculptures. The windows are their eyes, that reveal a part of their soul. The open doors are talking with us, inviting us to come in, to hear their inner stories. And the graphic layout of bricks, of glass, of wood or whatever the genuine architects create are their eye-catching clothes, which make our cities, our urban spaces more beautiful, more vibrant.


Infos about the series "By the Roadside" 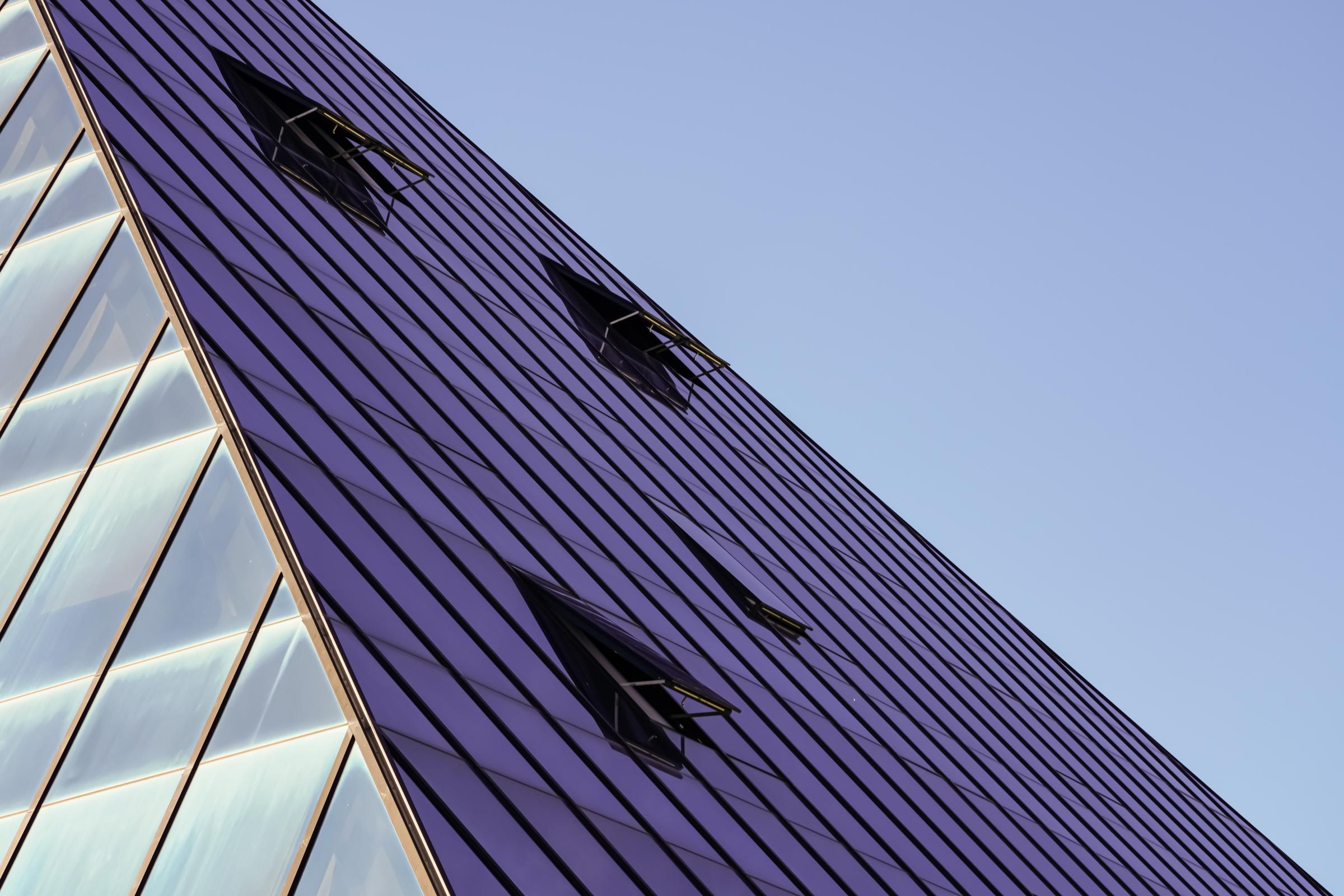 Fürth, Germany
# 3733
8/2022
The Glass Pyramid in Fürth. The 42 meter high glass pyramid was opened in 1994. The pyramid is a hotel with 101 rooms in the Fürth district of Kalbsiedlung in the form of a square pyramid made of glass. Glass and steel are the supporting elements of the building. The German Chancellors Helmut Kohl, Gerd Schröder and Angela Merkel have already stayed here at the Excelsior Hotel Nürnberg Fürth. 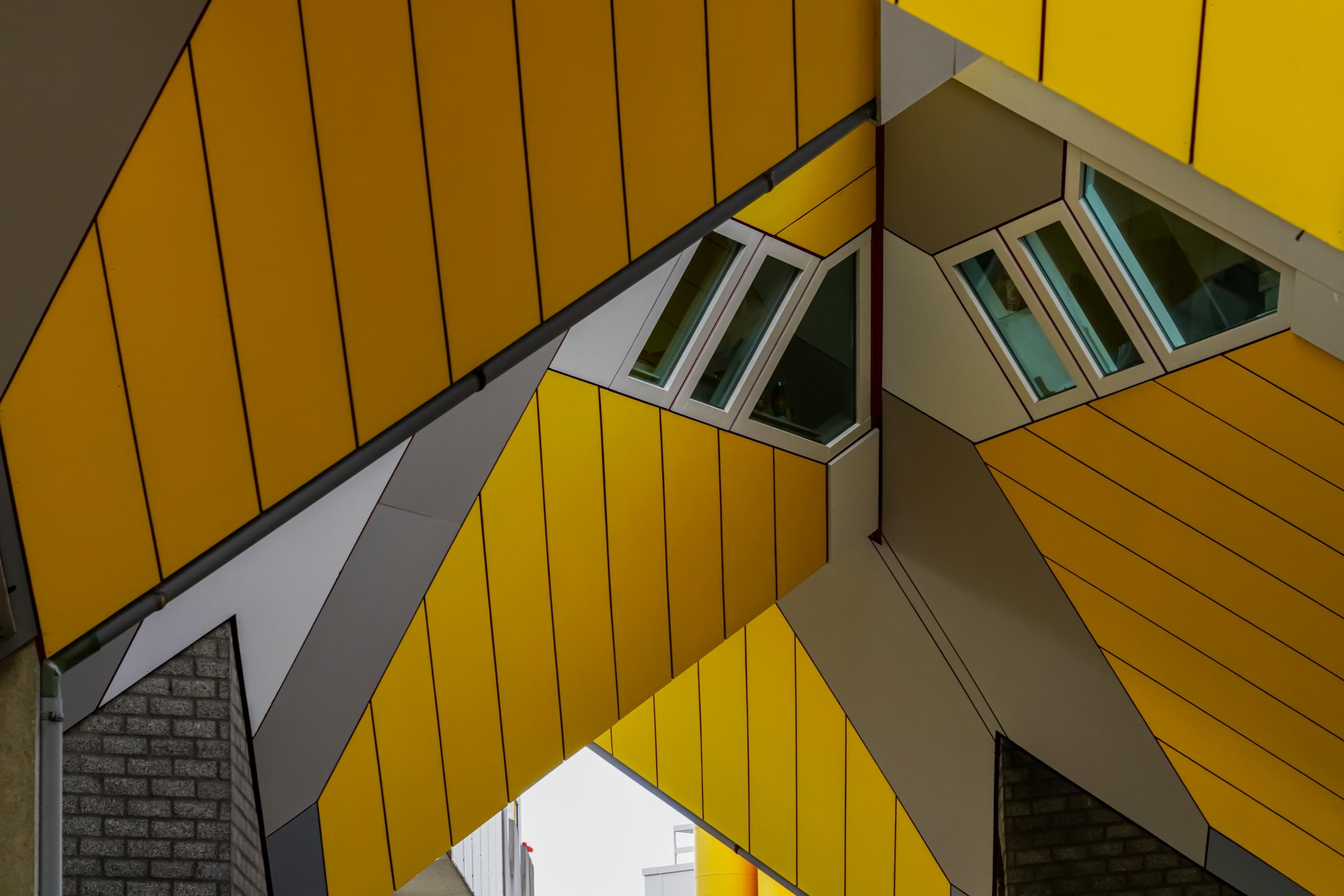 Rotterdam, The Netherlands
# 3725
5/2022
The cube houses are residential buildings designed by architect Piet Blom on the basis of cube-shaped structures standing on a corner. 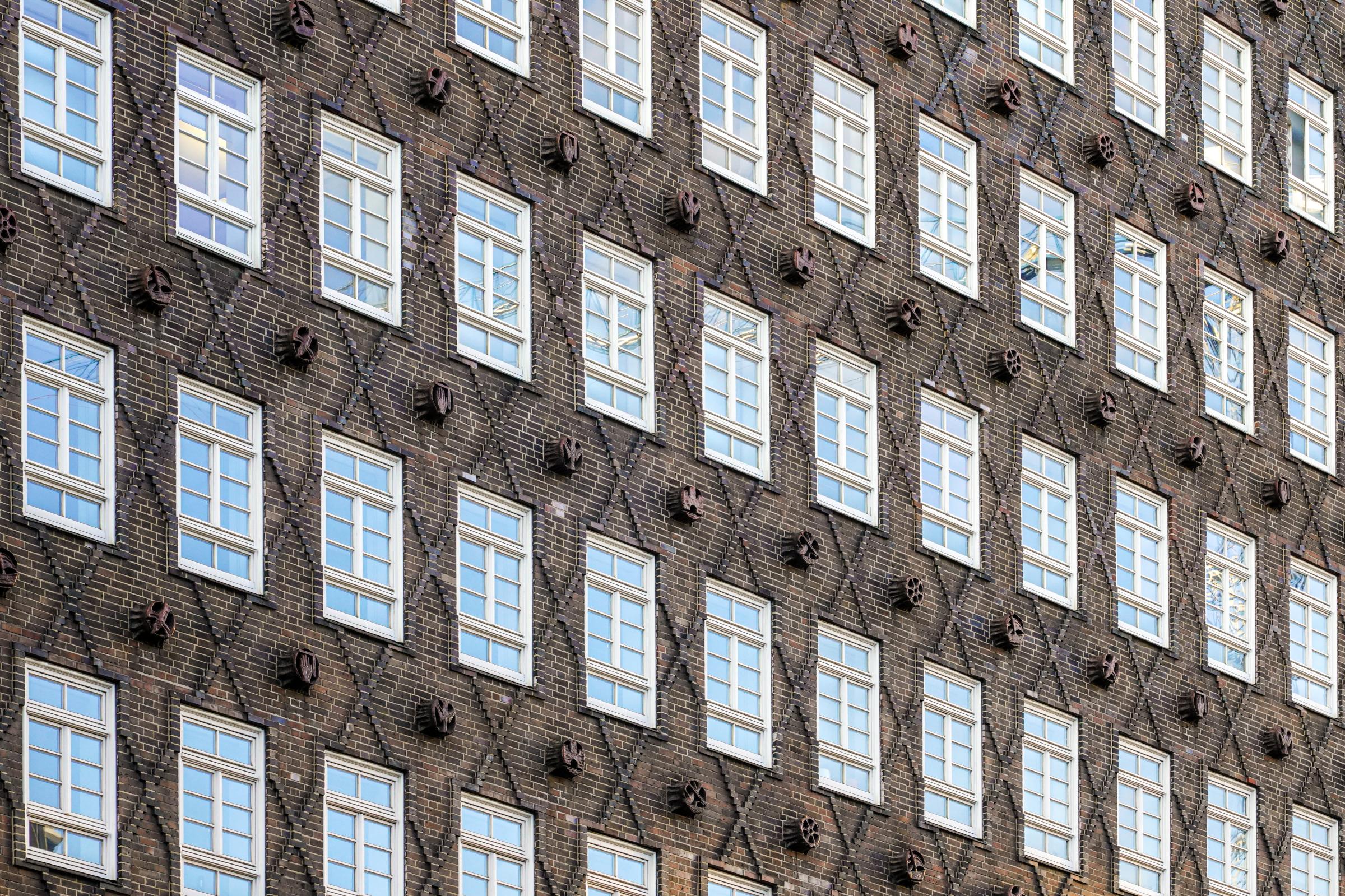 Hamburg, Germany
# 3697
8/2022
UNESCO World Heritage Site: Chilehaus Hamburg. Facade of the Chilehaus. The Chilehaus is a Kontorhaus built from 1922 to 1924 in Hamburg's Kontorhaus district. The architecture of Fritz Höger was exemplary for the brick expressionism of the 1920s, which was inspired by brick Gothic and expressionism. With its up to ten stories on a floor area of 5950 m², the building represents one of the first high-rise buildings in Hamburg. With its spire to the east, reminiscent of a ship's bow, it has become an icon of expressionism in architecture. In 2015, the Kontorhausviertel was designated a UNESCO World Heritage Site along with Hamburg's Speicherstadt warehouse district and the Chilehaus. UNESCO justification: Speicherstadt and the adjacent Kontorhaus district are two densely built urban areas in the centre of the port city of Hamburg. Speicherstadt, originally developed on a group of narrow islands in the Elbe River between 1885 and 1927, was partly rebuilt from 1949 to 1967. It is one of the largest cohe 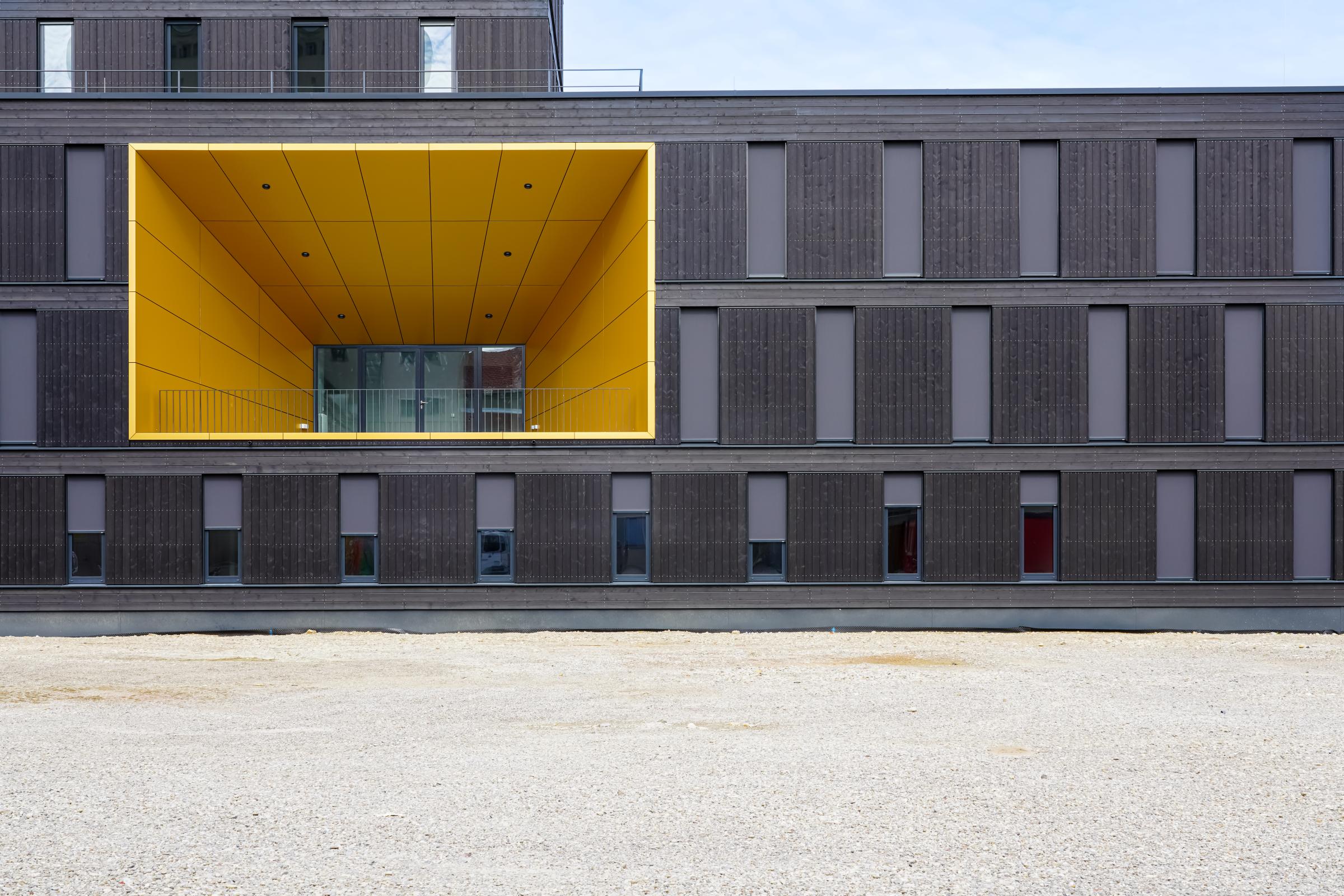 Augsburg, Germany
# 3705
9/2022
The Musikbox - Part of a Centre for Culture and Creative Industries on a Gasworks Site.Another step for the Gaswerk site in Augsburg towards a centre for culture and creative industries has been completed. The Musikbox, a new building for around 50 rehearsal rooms for musicians. In addition, rehearsal rooms that can be rented by the hour or day.  The large loggia can be used by bands for concerts. The building was constructed using a sustainable, largely prefabricated timber hybrid construction method. The gasworks in Augsburg-Oberhausen is an industrial monument of European significance. It is one of the best-preserved complete ensembles of a gasworks. Since the end of 2015, the 8wners swa, together with the city of Augsburg, have been developing the approximately 70,000 square metre site with its historic industrial cathedrals into a centre for culture and the creative industries. 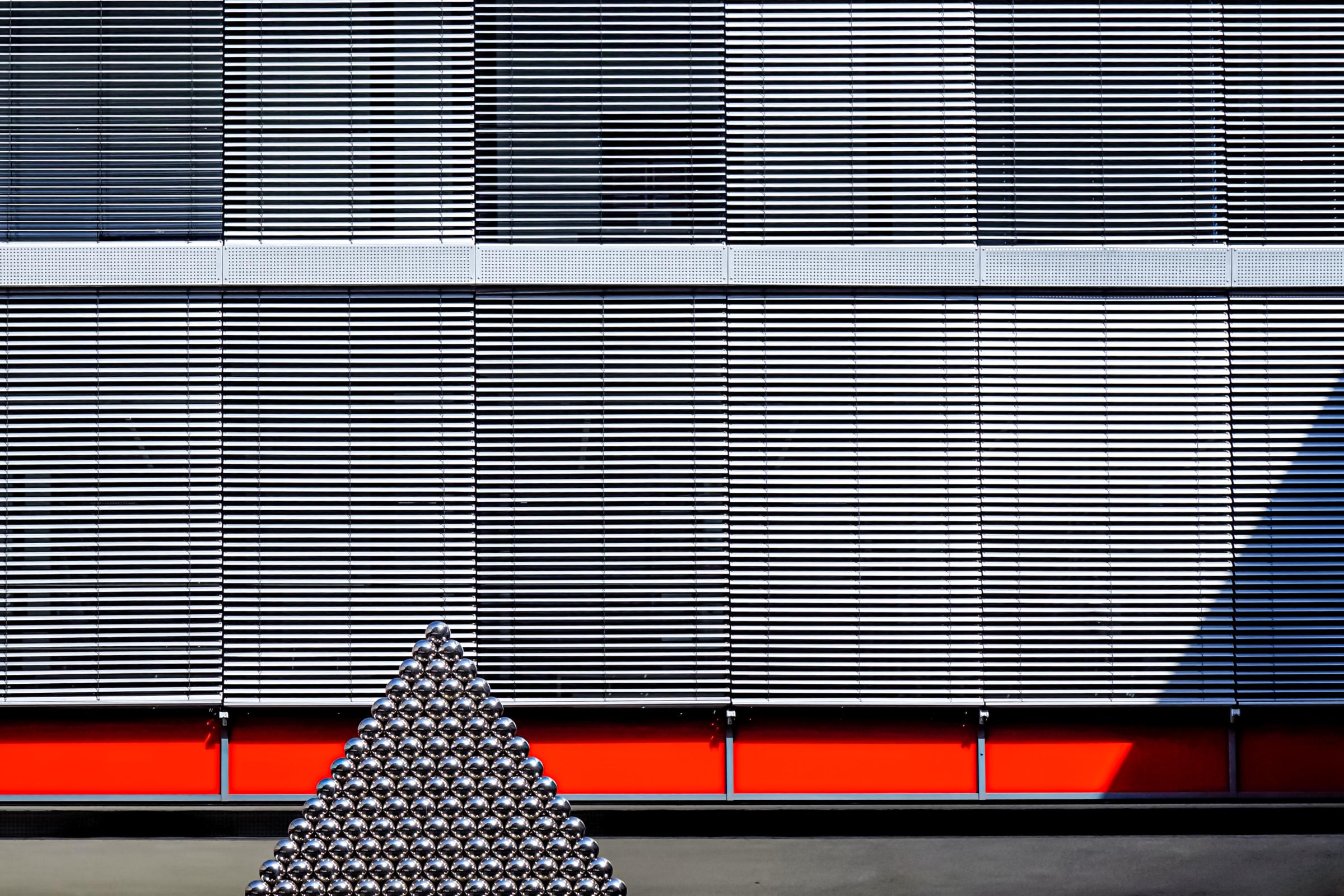 Augsburg, Germany
# 3700
8/2021
Partial view of a metal pyramid casting a shadow on the facade in the courtyard of the computer center and library of the Augsburg University of Applied Sciences. 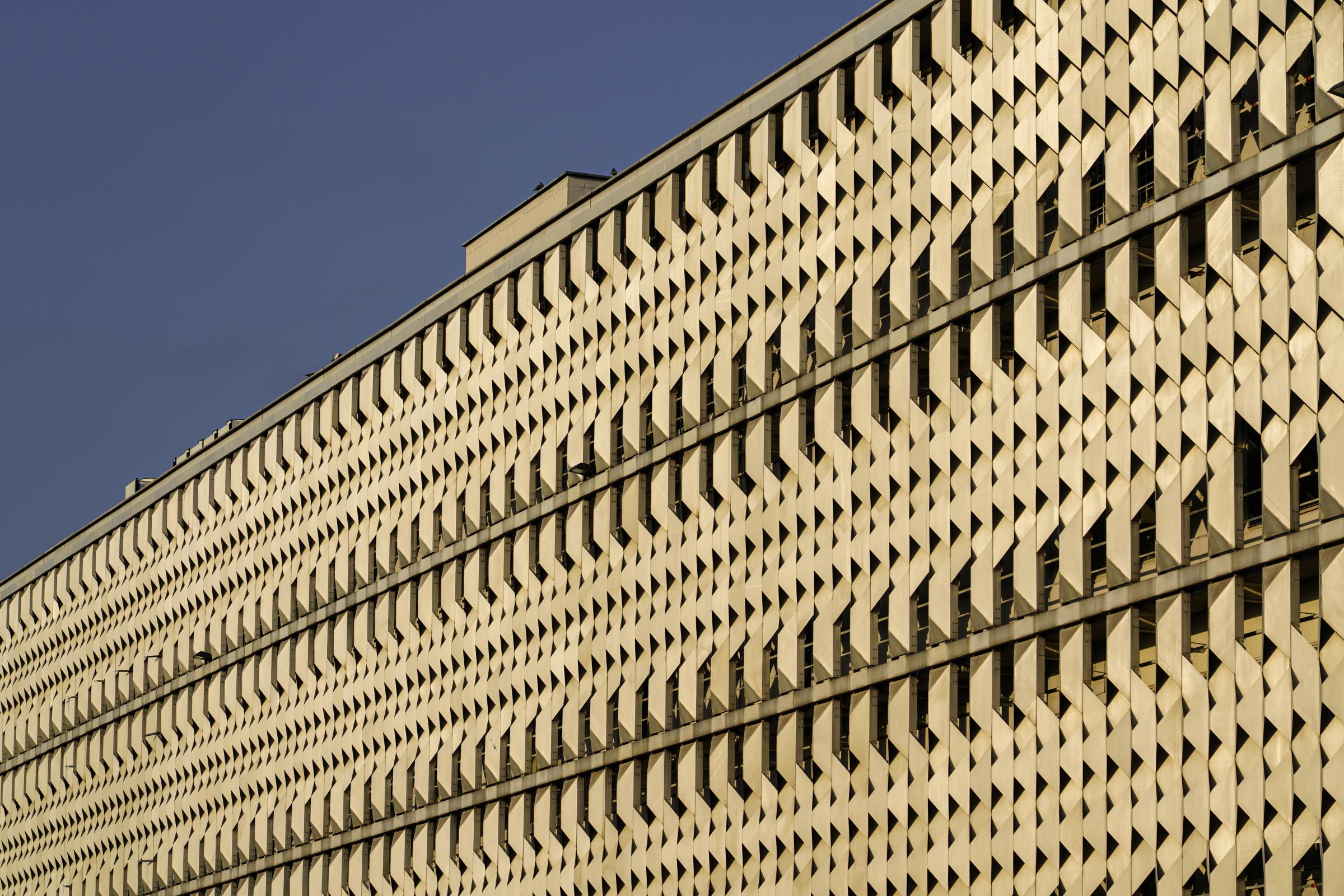 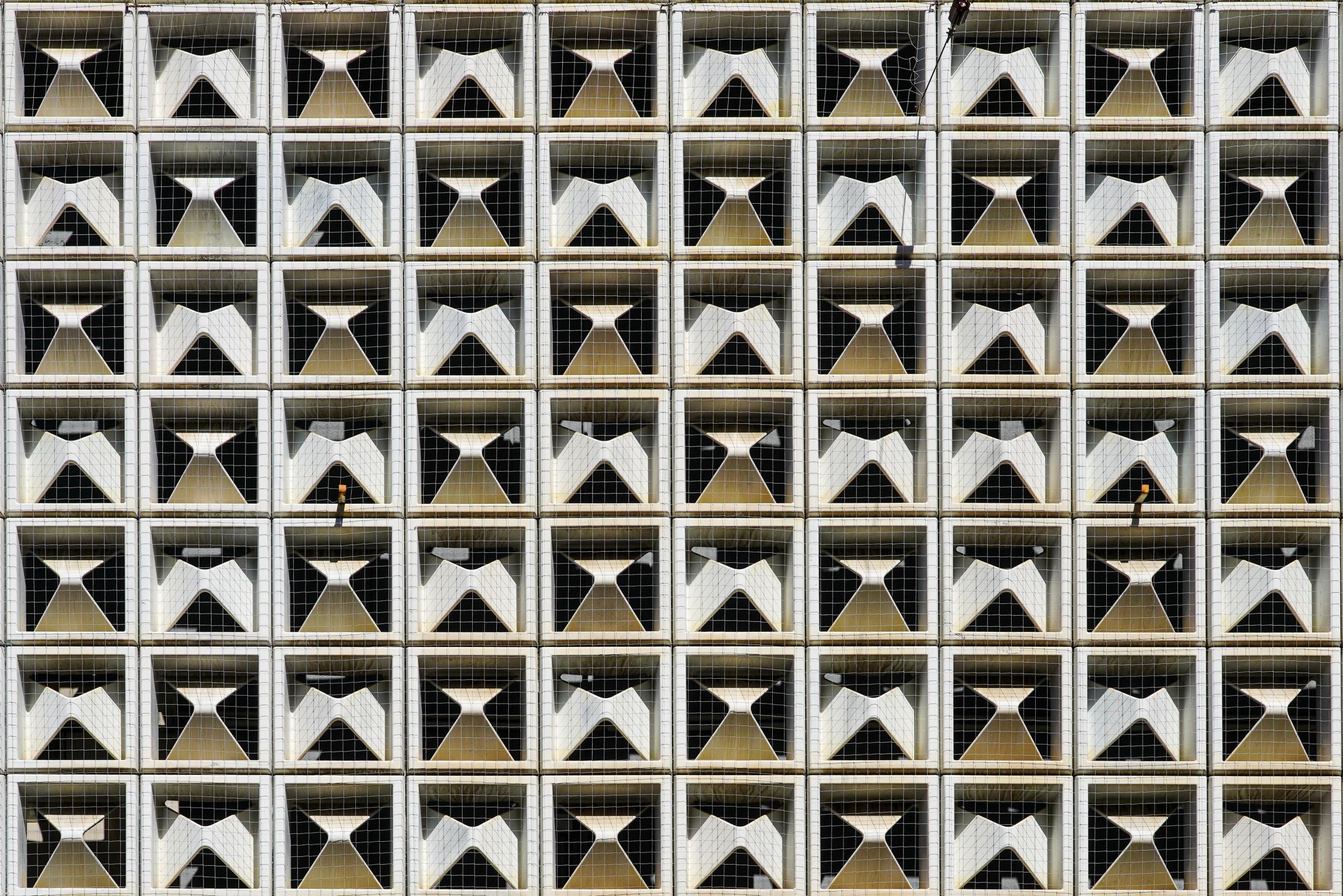 Trier, Germany
# 3650
7/2022
Close-up of a facade made of Horten tiles. Building of Horten department store in Trier, Fleischstraße (today Galeria Kaufhof) with typical facade of Horten tiles. The Horten tile is the building block of a special building facade, named after the Horten department store. It was designed by Helmut Rhode around 1961.The basic size of a tile is 50 × 50 cm, the depth is about 15-20 cm. Initially, the tiles were made of ceramic, later - aluminum. The shape corresponds to a stylized H for hoarding. 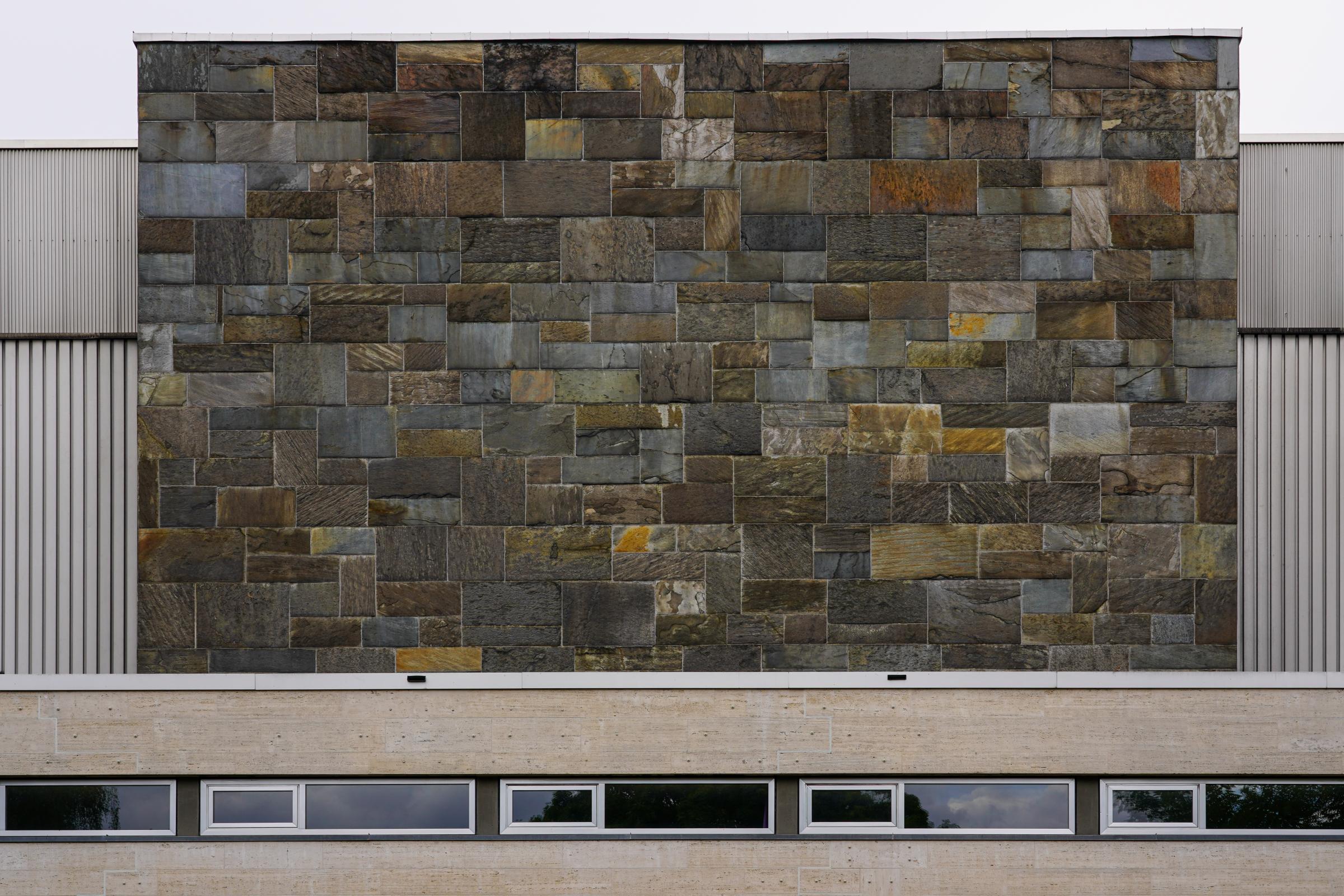 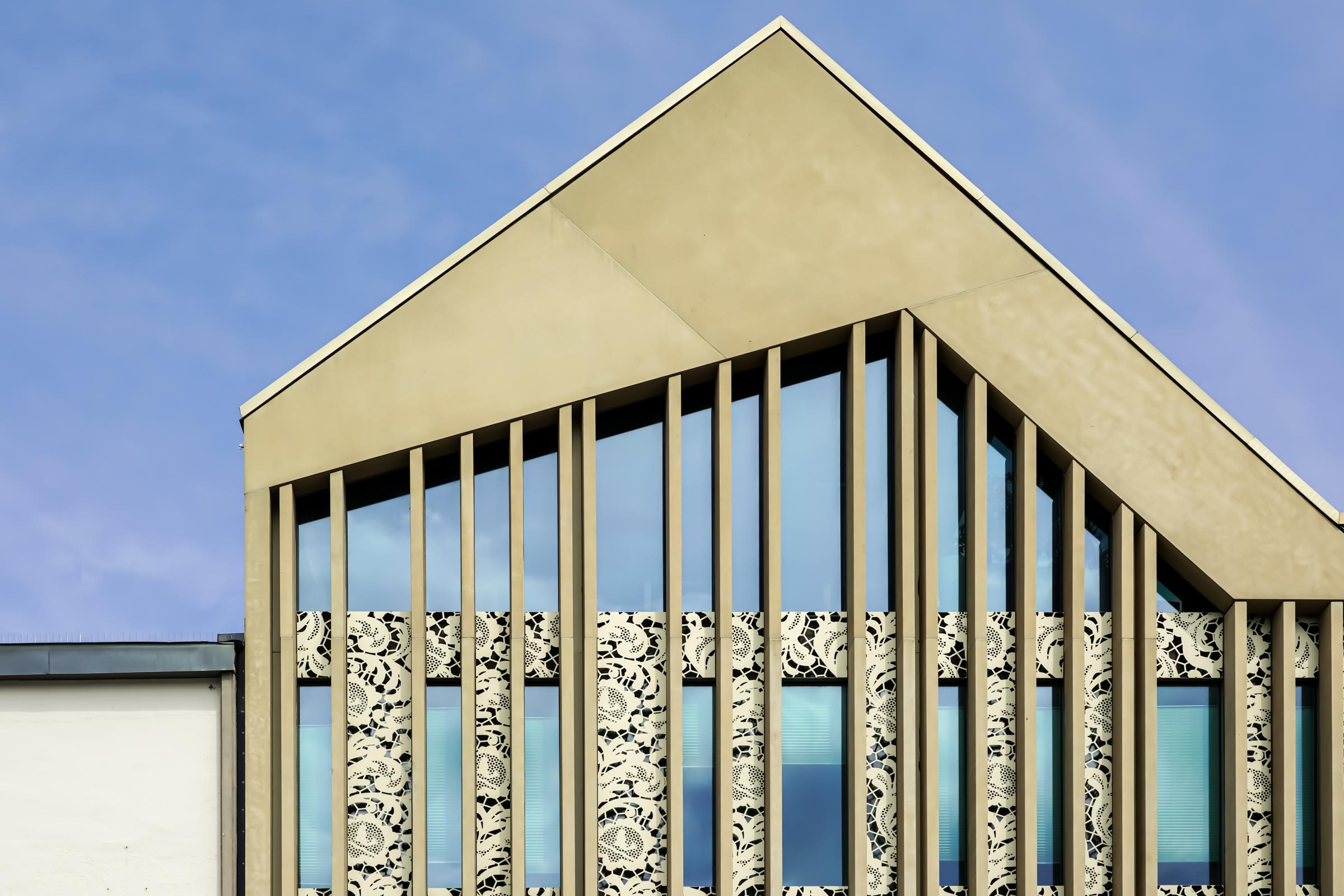 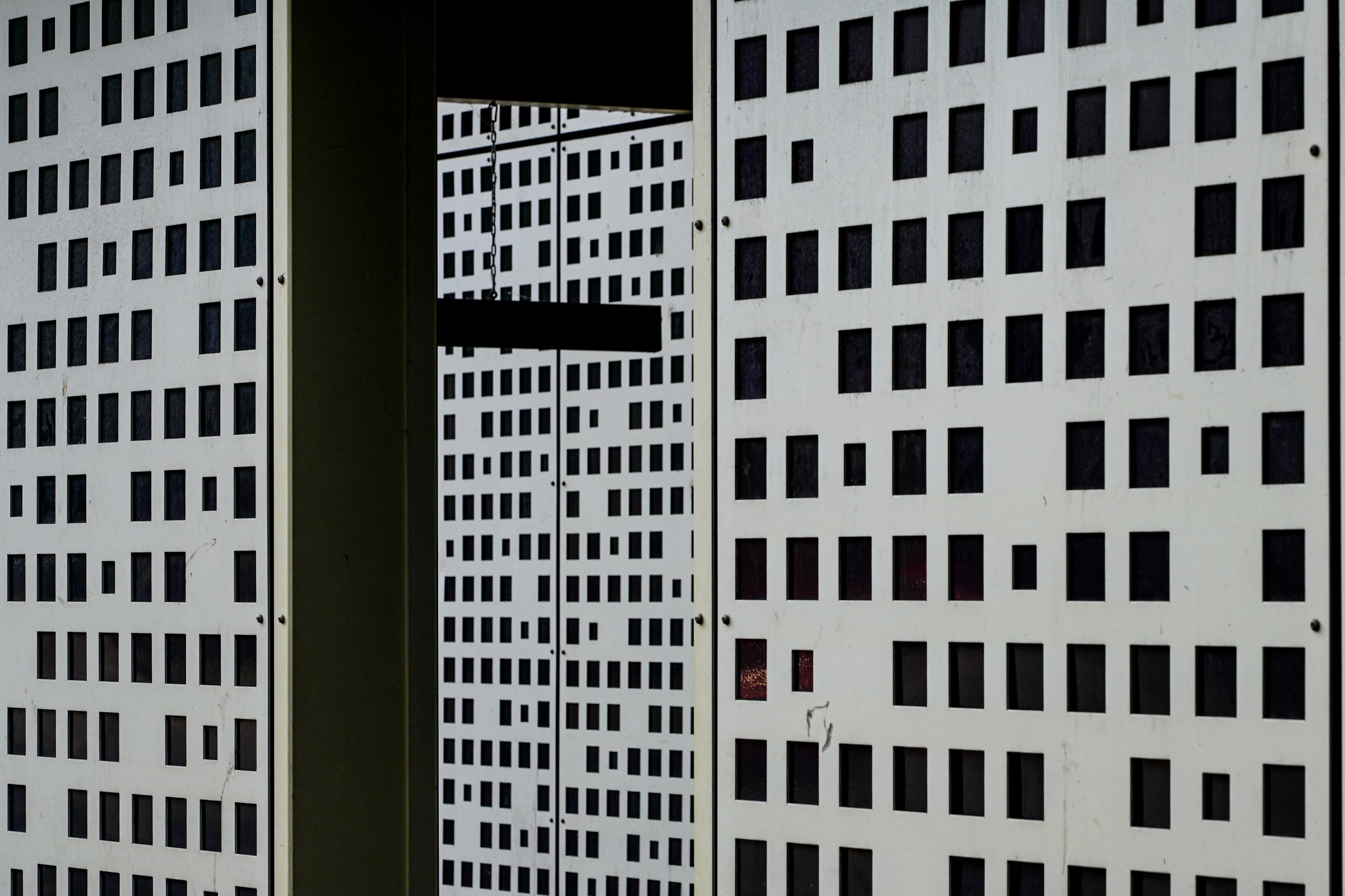 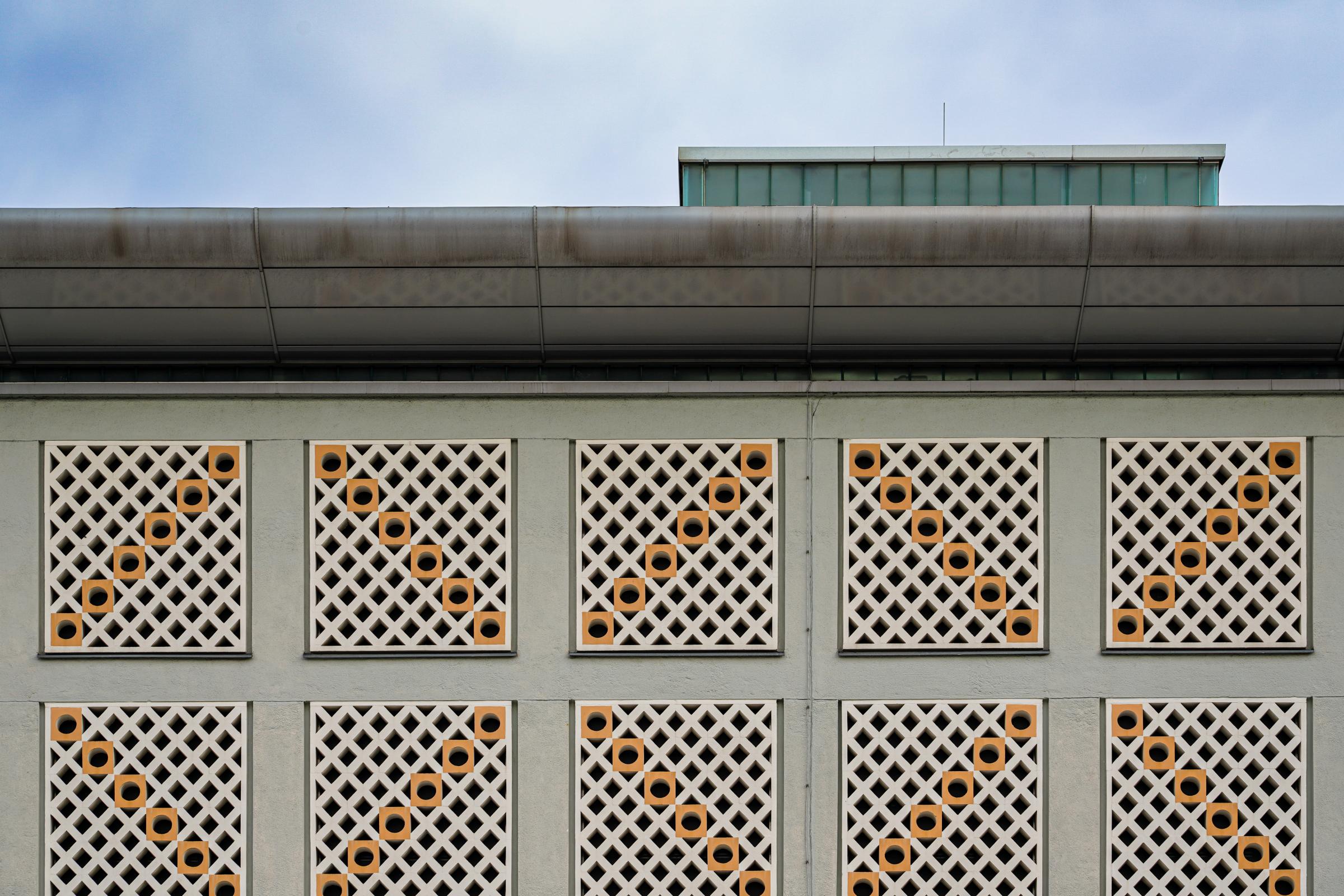 Trier, Germany
# 3653
7/2022
In the house Weberbach 25 the current building of the city library, city archive and treasury was built from 1955 to 1960 according to plans by Alfons Leitl. It consists of a five-story cube covered by a concrete latticework The building is listed as a historical monument.The Scientific Library of the City of Trier is a public scientific library with valuable holdings from the Middle Ages and modern times. The Stadtarchiv is the municipal archive responsible for the city of Trier. In the treasure chamber of the Trier City Library and City Archives, a fascinating look into the art and culture of the Middle Ages and early modern times is open to all those interested in history. 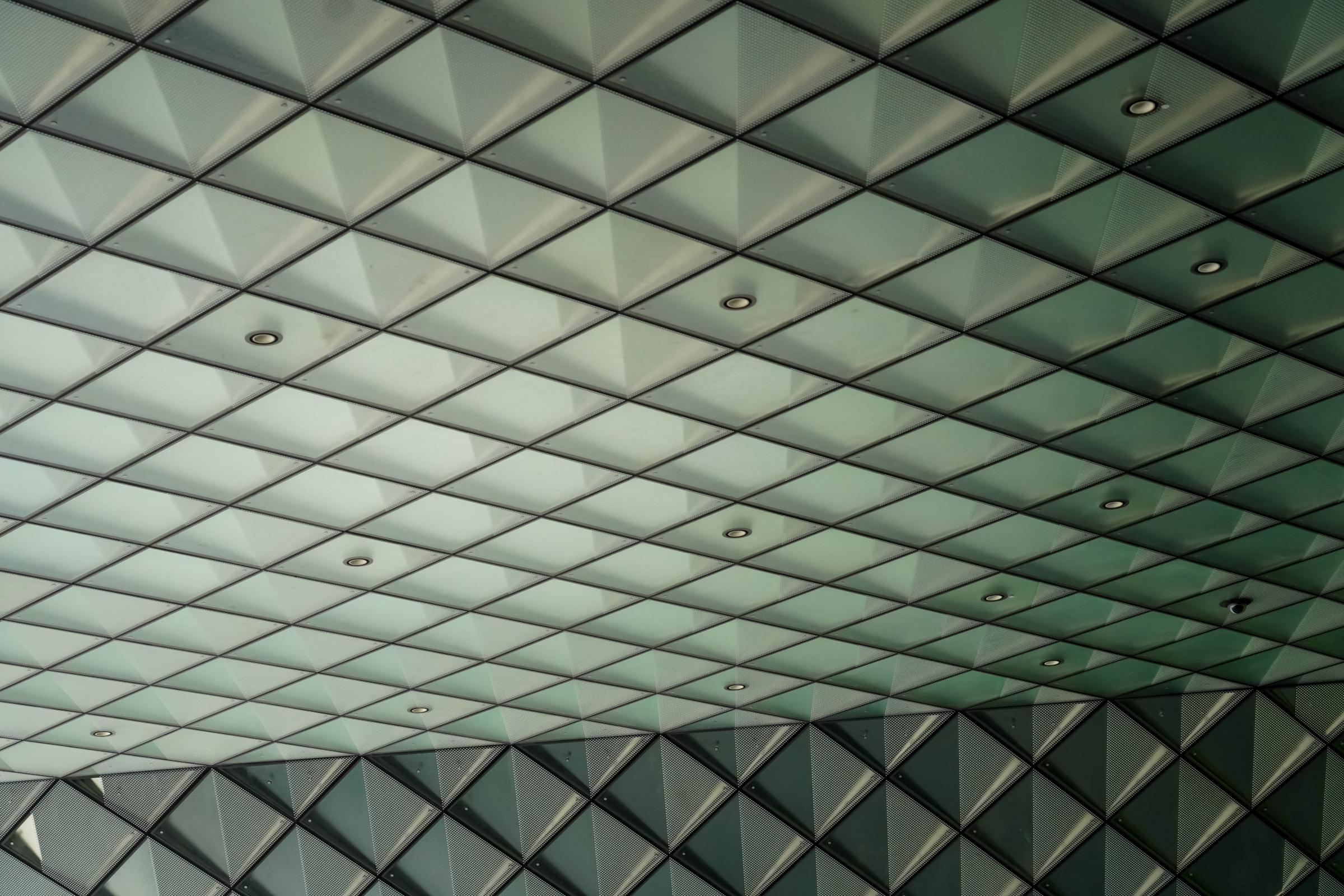 Berlin, Germany
# 3410
4/2022
Close-up of ceiling elements and facade elements of the Museum Futurium Berlin. The facade is a shell of folded metal reflectors and ceramic printed cast glass. 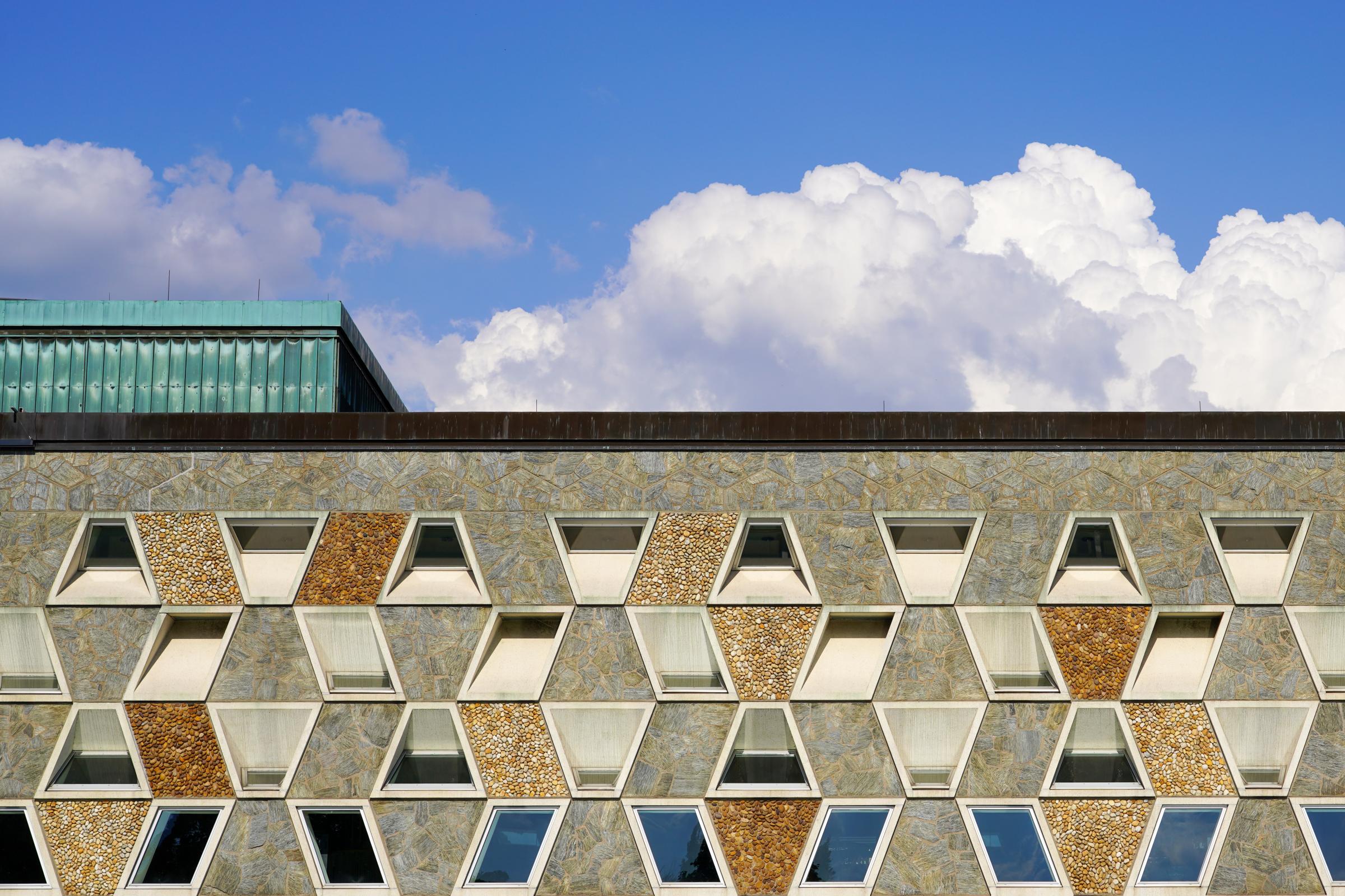 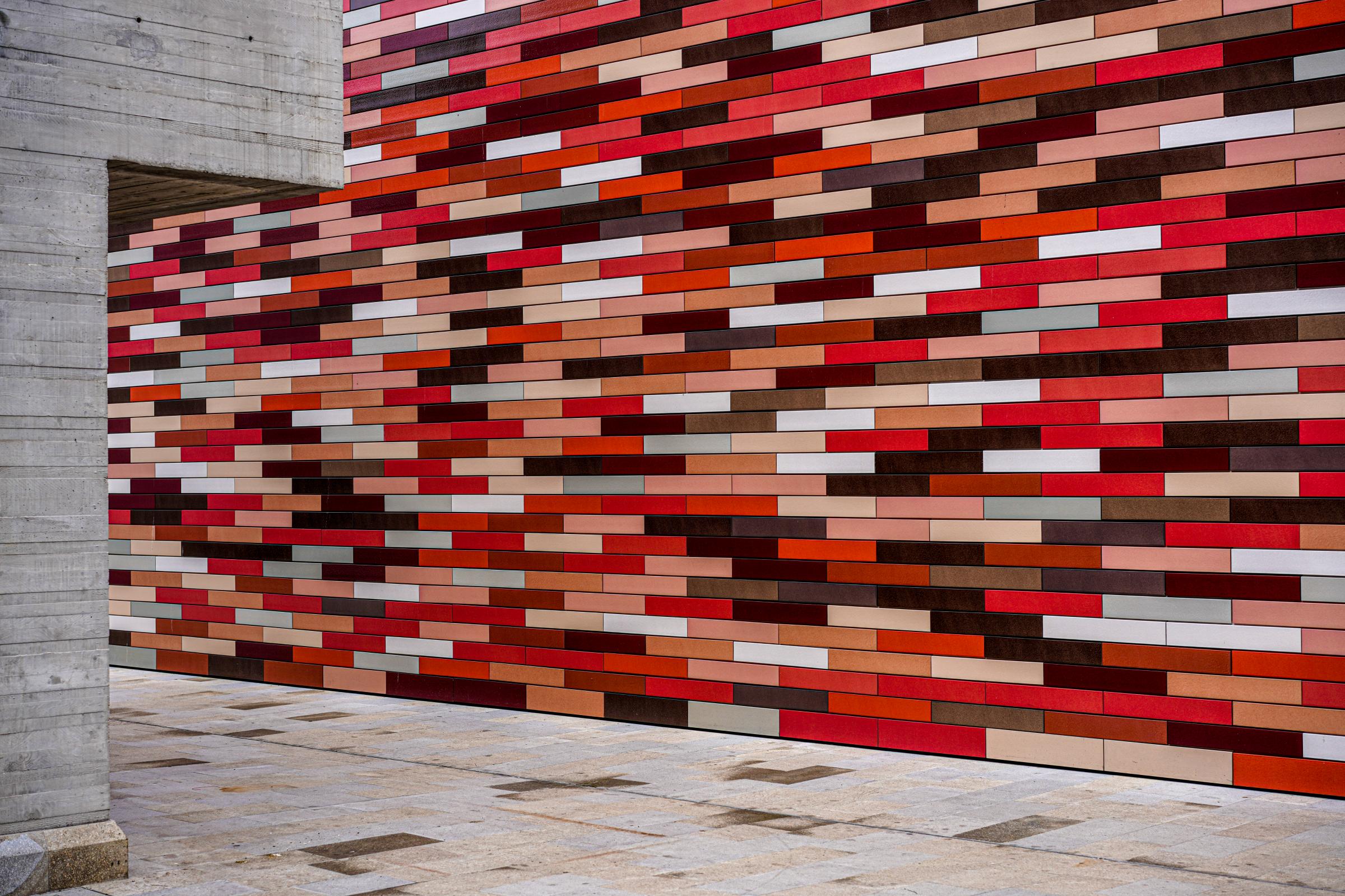 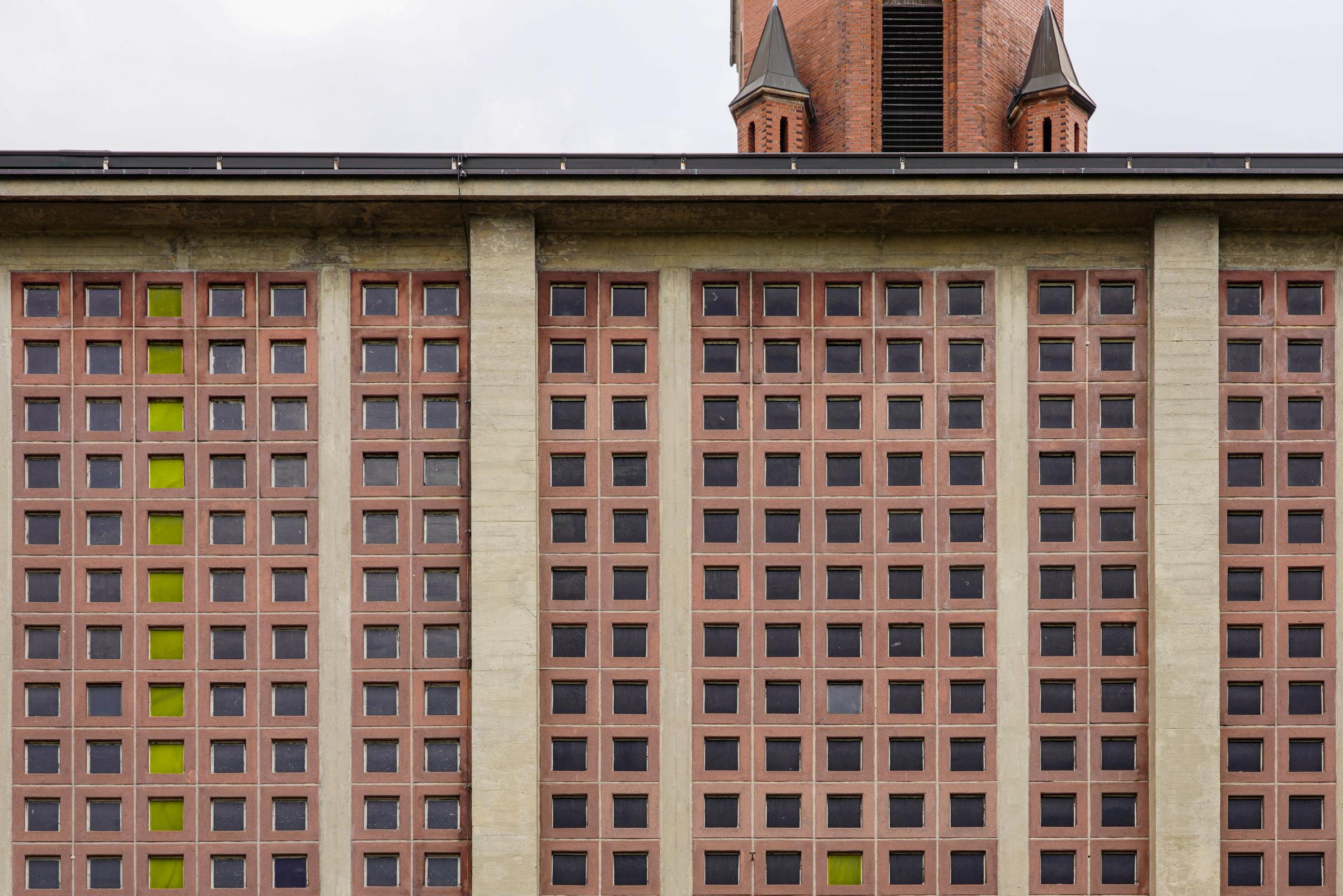 Nuremberg, Germany
# 3540
7/2022
Facade of the modern extension of the Evangelical Lutheran Christ Church in Nuremberg-Steinbühl. In the background the tower of the church built in 1891-94. 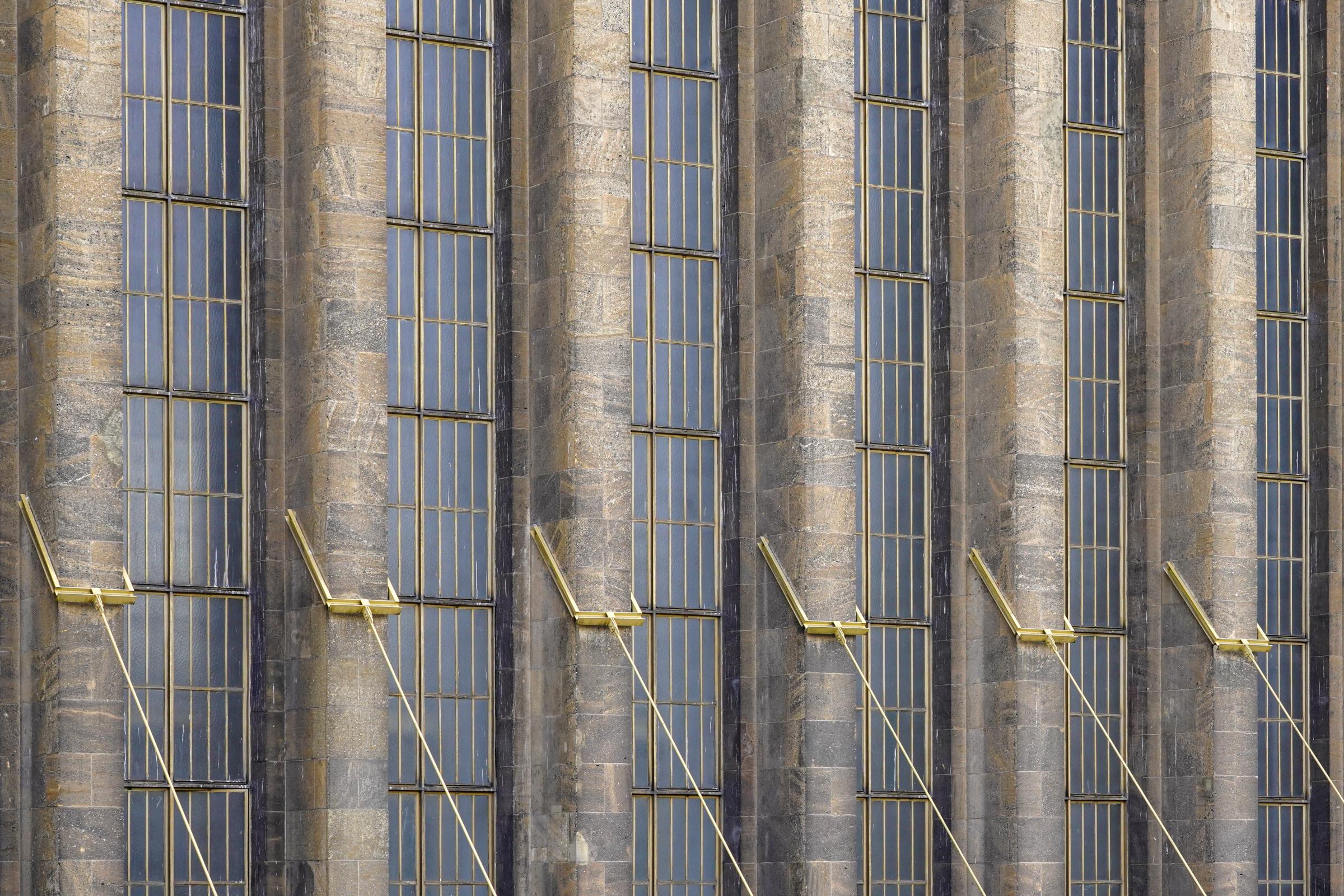 Berlin, Germany
# 3361
5/2022
High halls, stone cladding and columns signaled Tempelhof Airport's claim to status.In the 1930s, the traffic volume of the old Tempelhof Airport was at the top of European air traffic, ahead of Paris, Amsterdam and London. 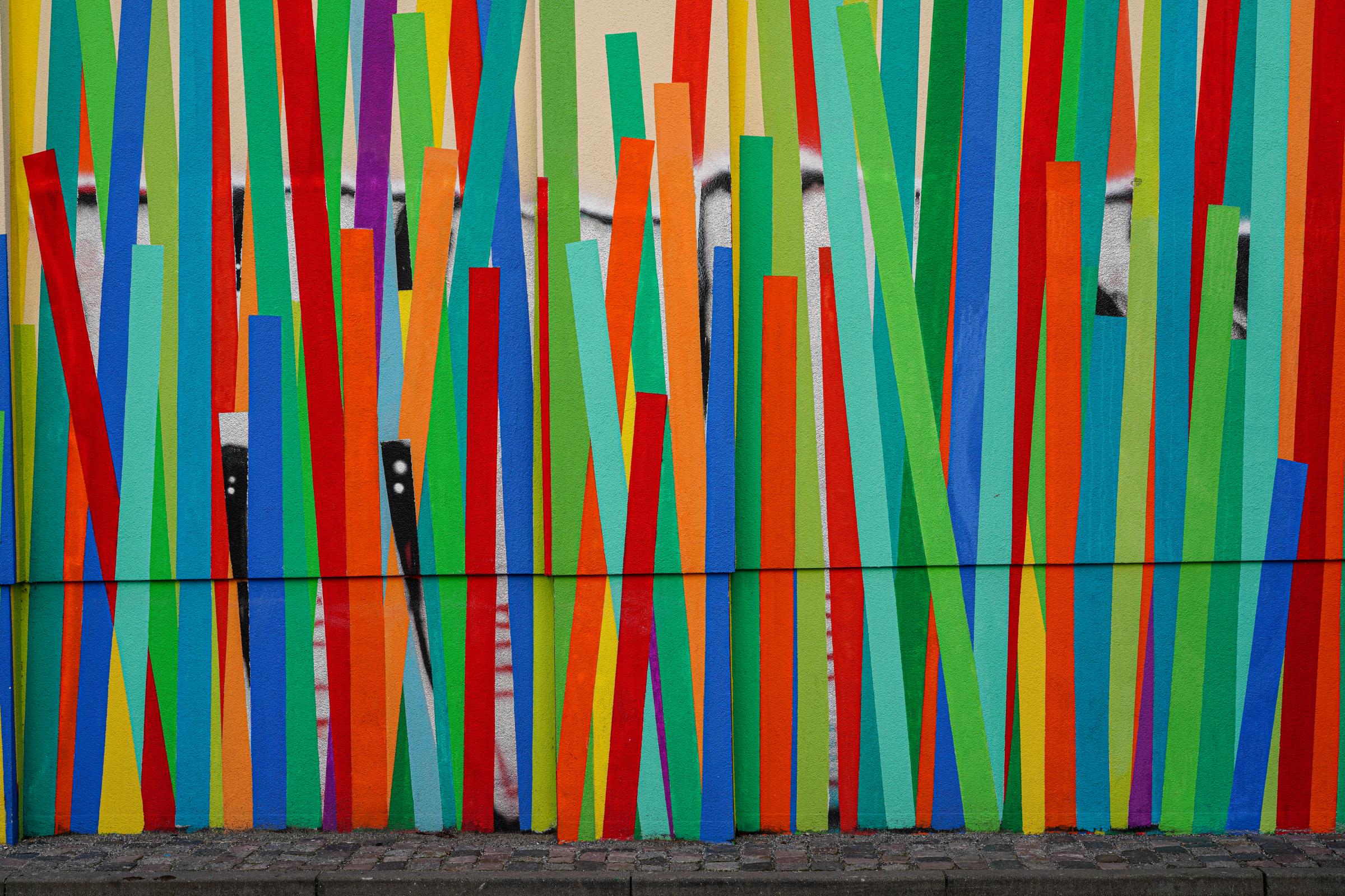 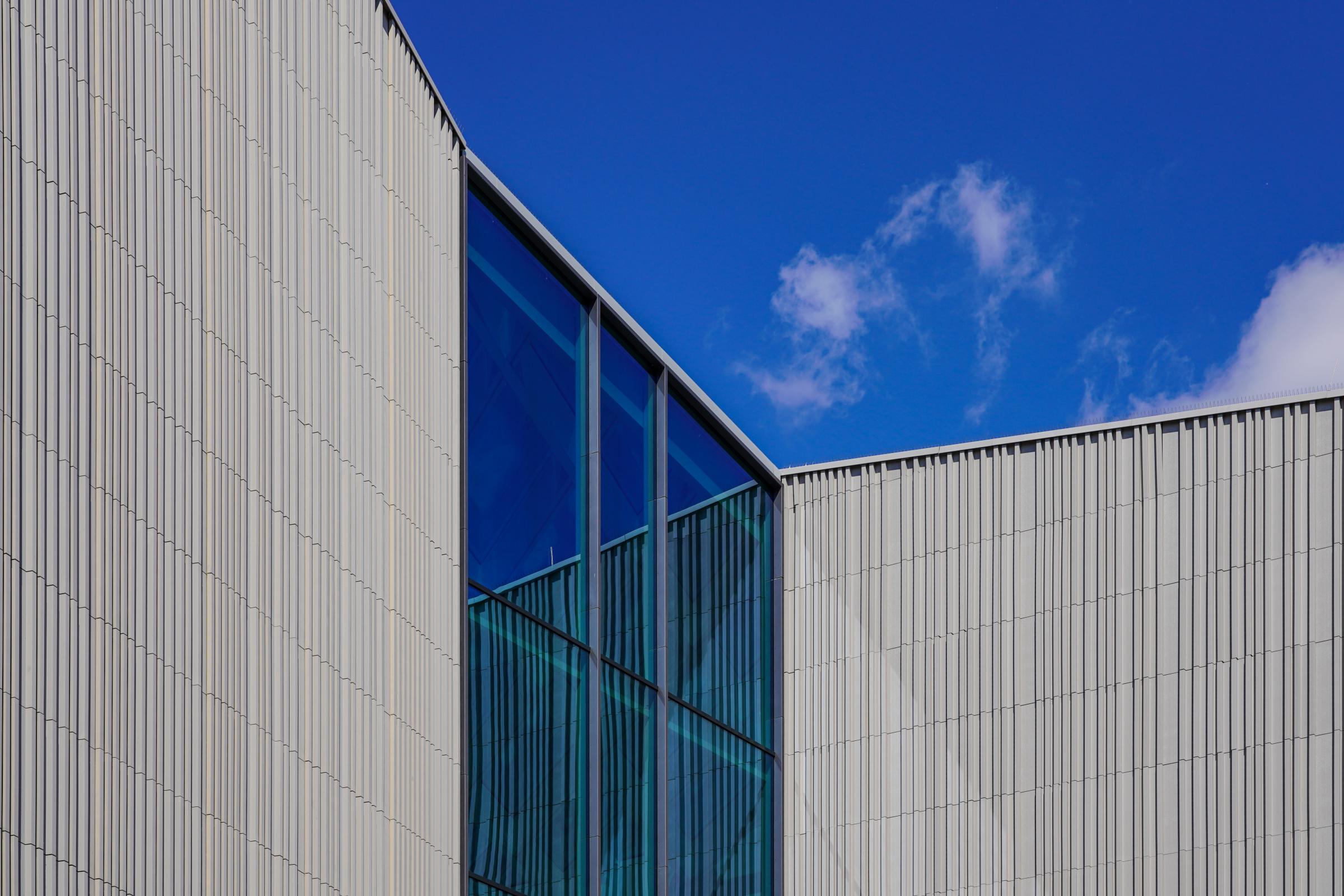 Regensburg, Germany
# 3484
6/2022
The House of Bavarian History, a museum of new Bavarian history in the old town of Regensburg. Architects Wörner, Traxler, Richter. 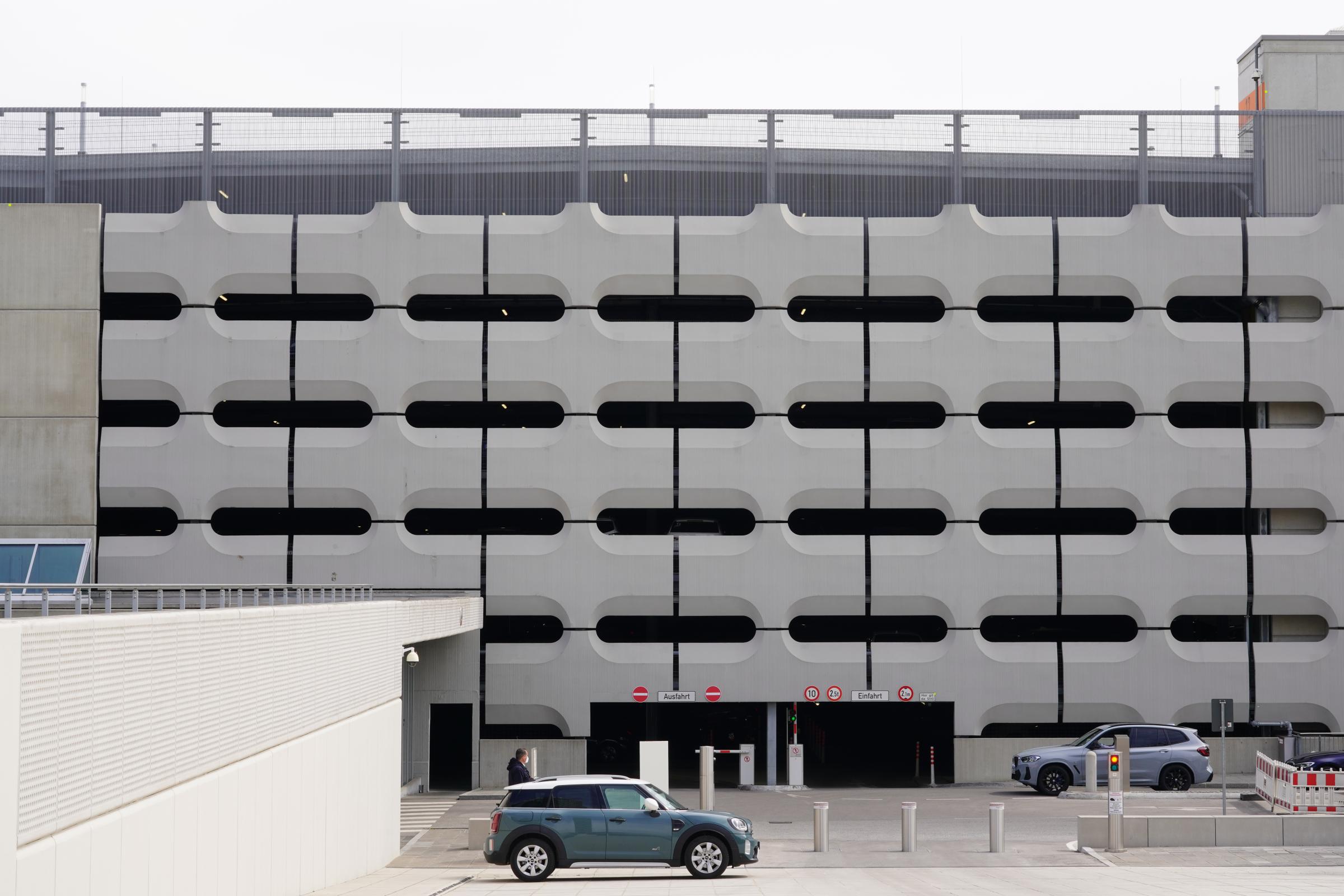 Munich, Germany
# 3328
4/2022
Two cars in front of the multi-story BMW car park appear to be formally coordinated with it, as if they had been parked there, especially for a carefully planned composition. The listed BMW Group Parking Garage designed by Karl Schwanzer is for 1600 vehicles and fits harmoniously into the ensemble of BMW buildings in Munich.

From the series: Perfection in Blue-White - The BMW Architecture Ensemble in Munich 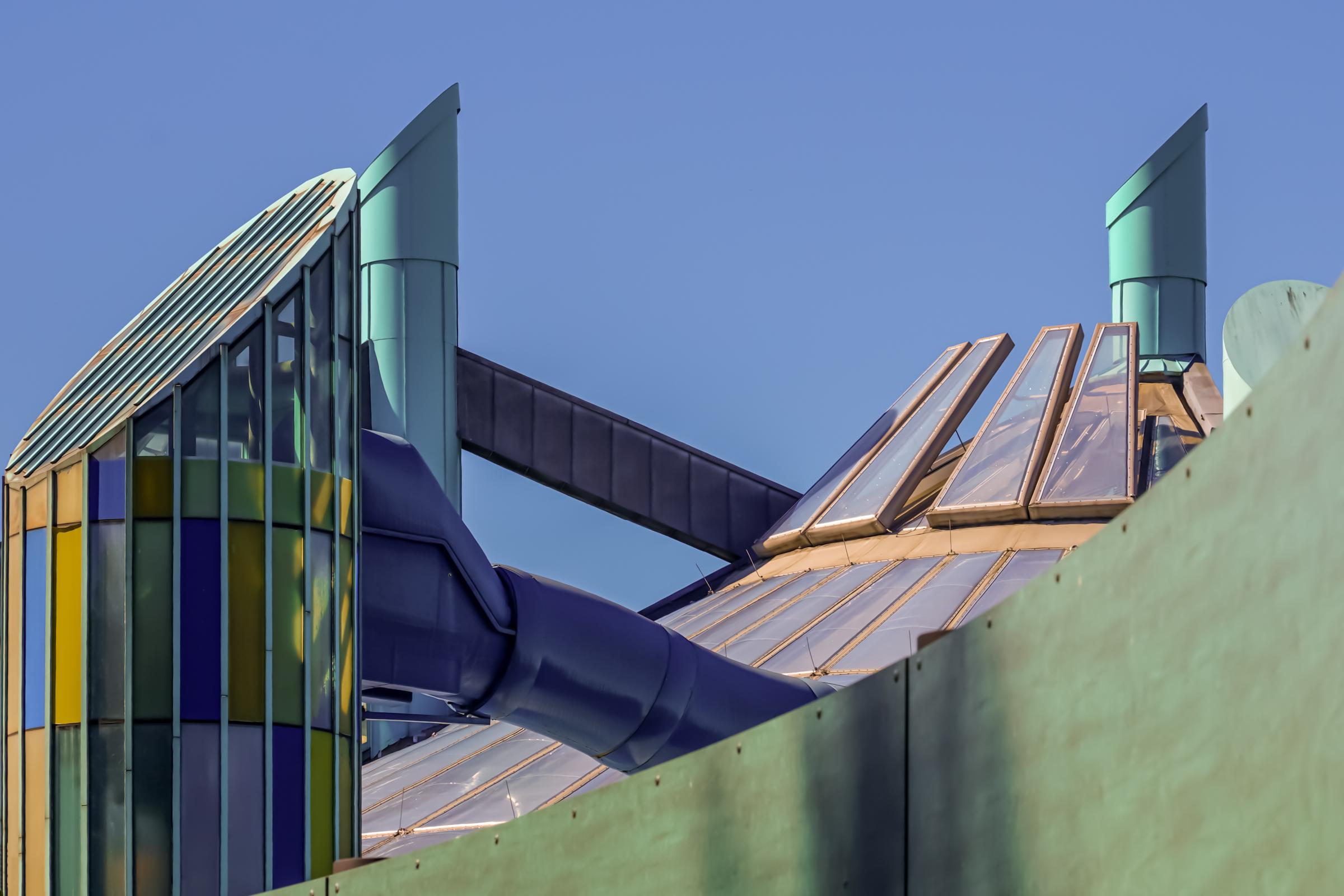 Amberg, Germany
# 3502
7/2022
Roof construction of the Kurfürstenbad, a combined outdoor and indoor swimming pool of the city of Amberg. 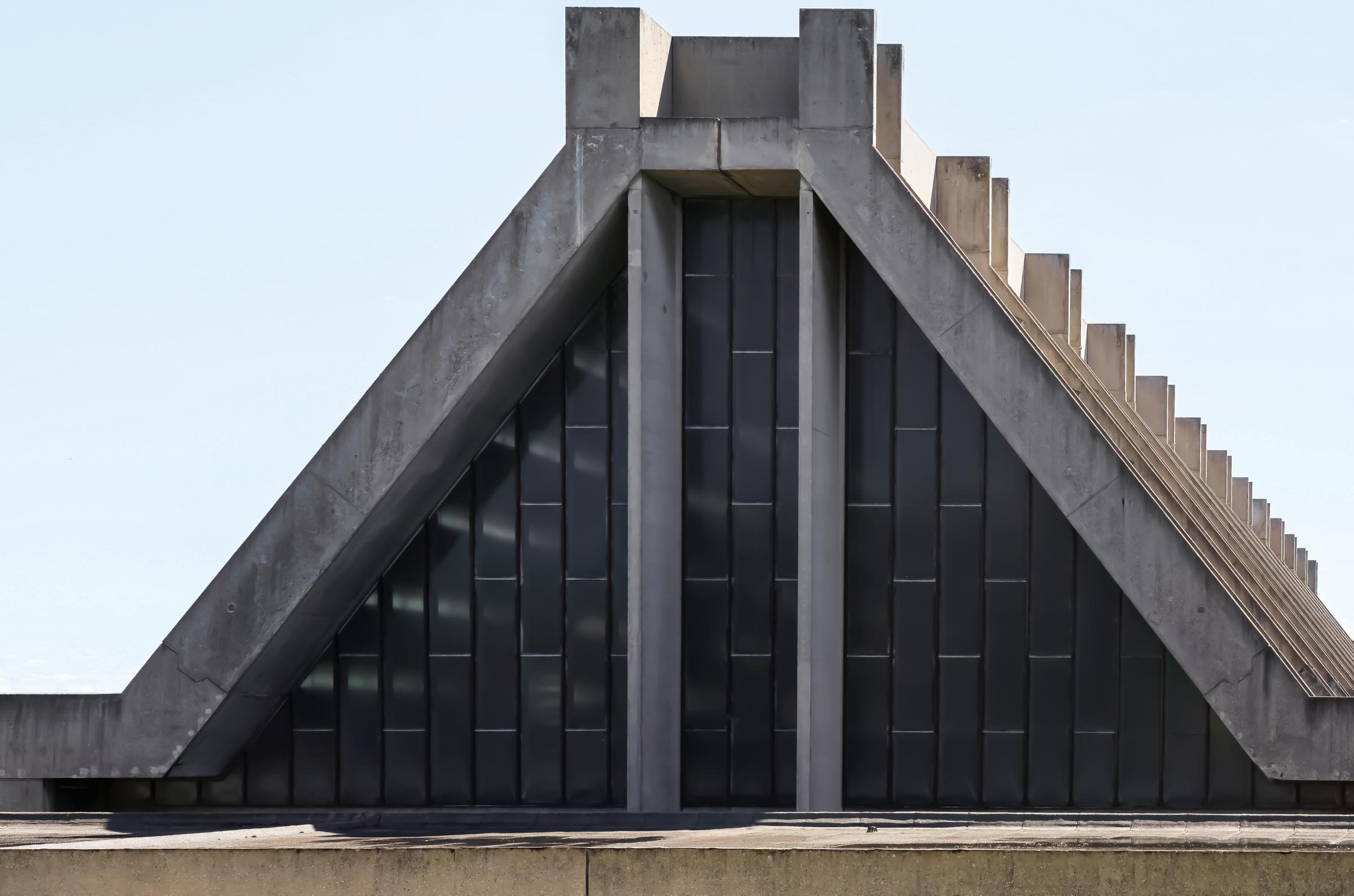 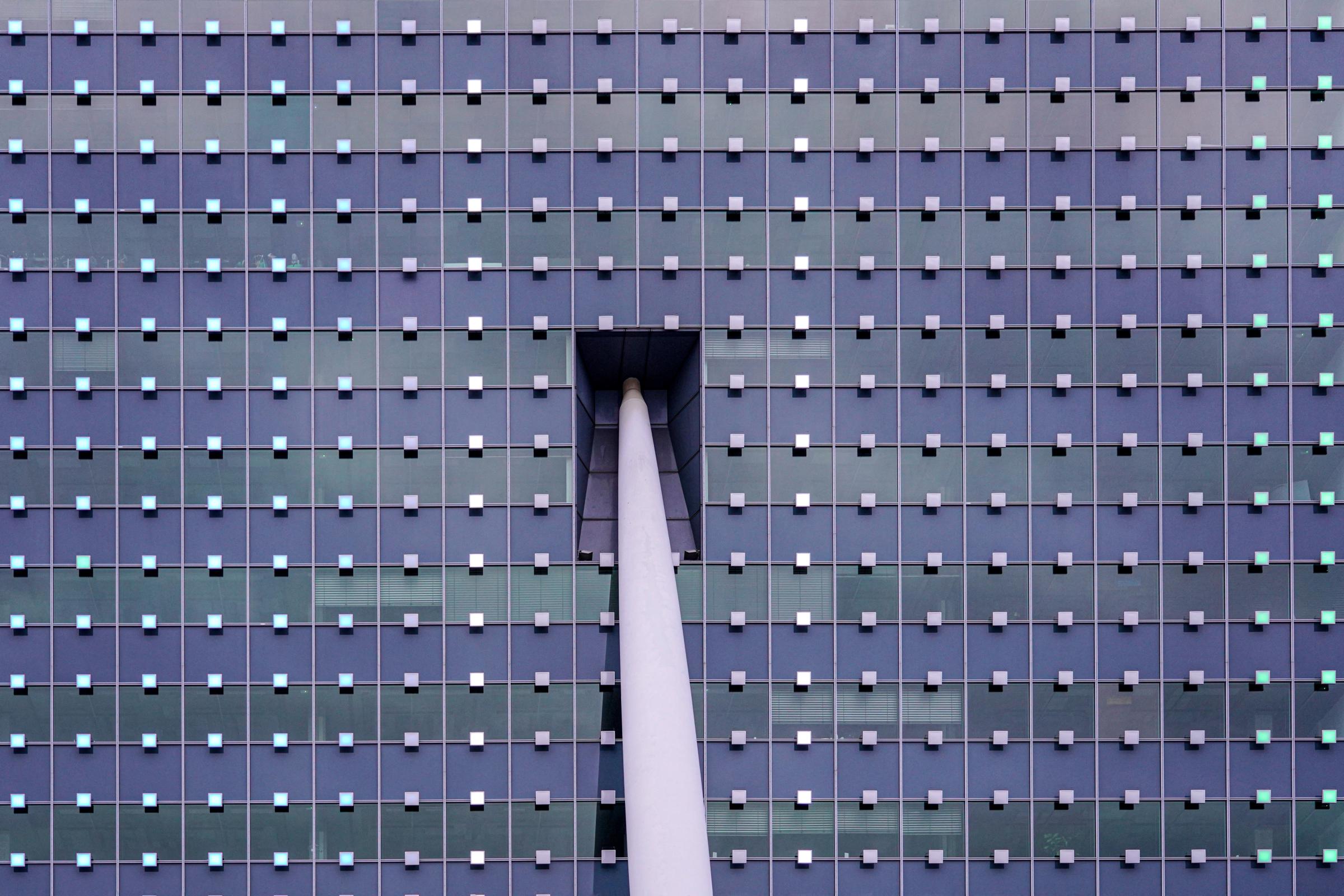 Rotterdam, The Netherlands
# 3492
5/2022
Facade detail of the the 96 meter high Toren op Zuid, also known as KPN Tower, a high-rise office building in Rotterdam. It houses the telecommunications company KPN. 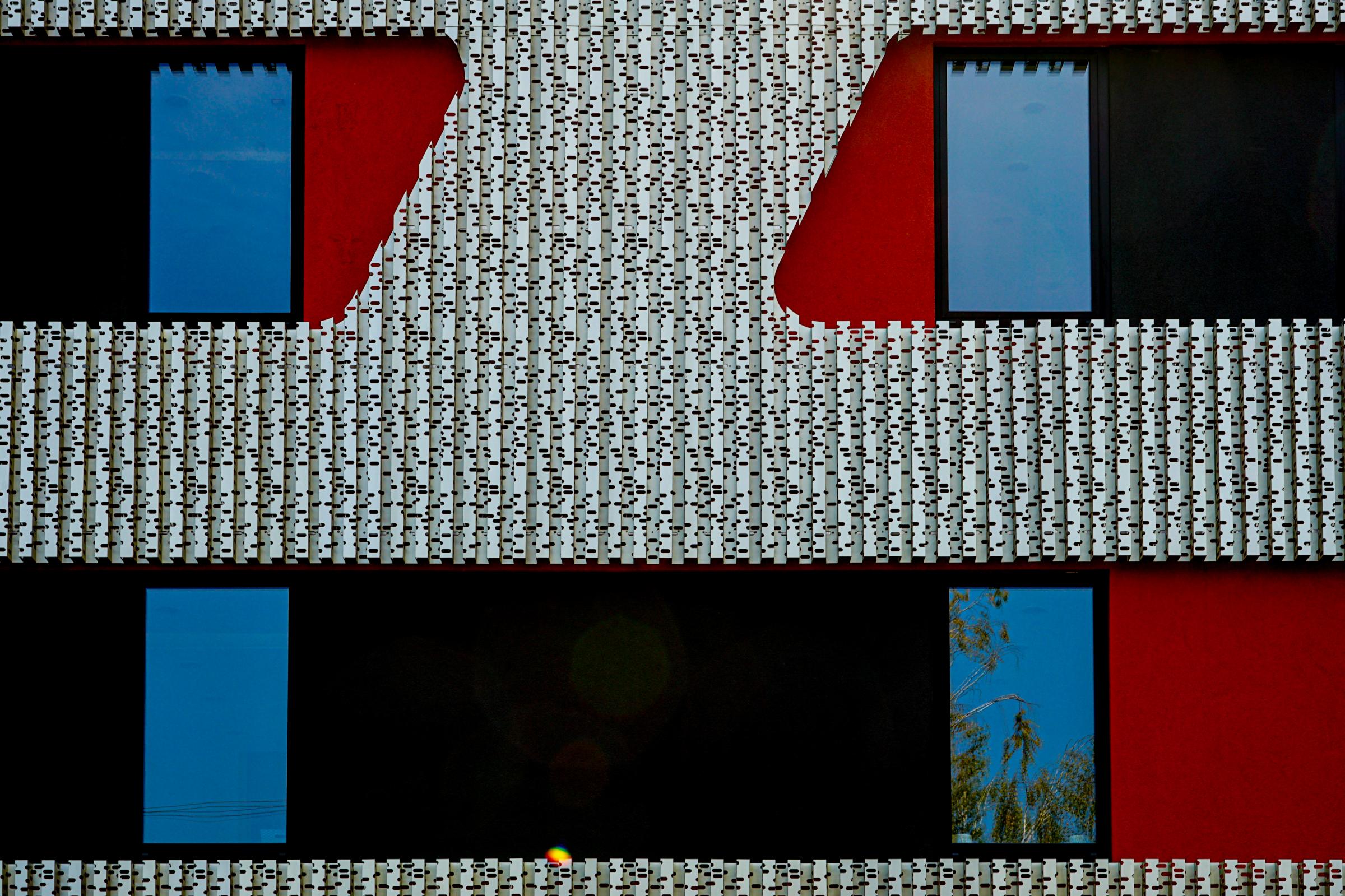 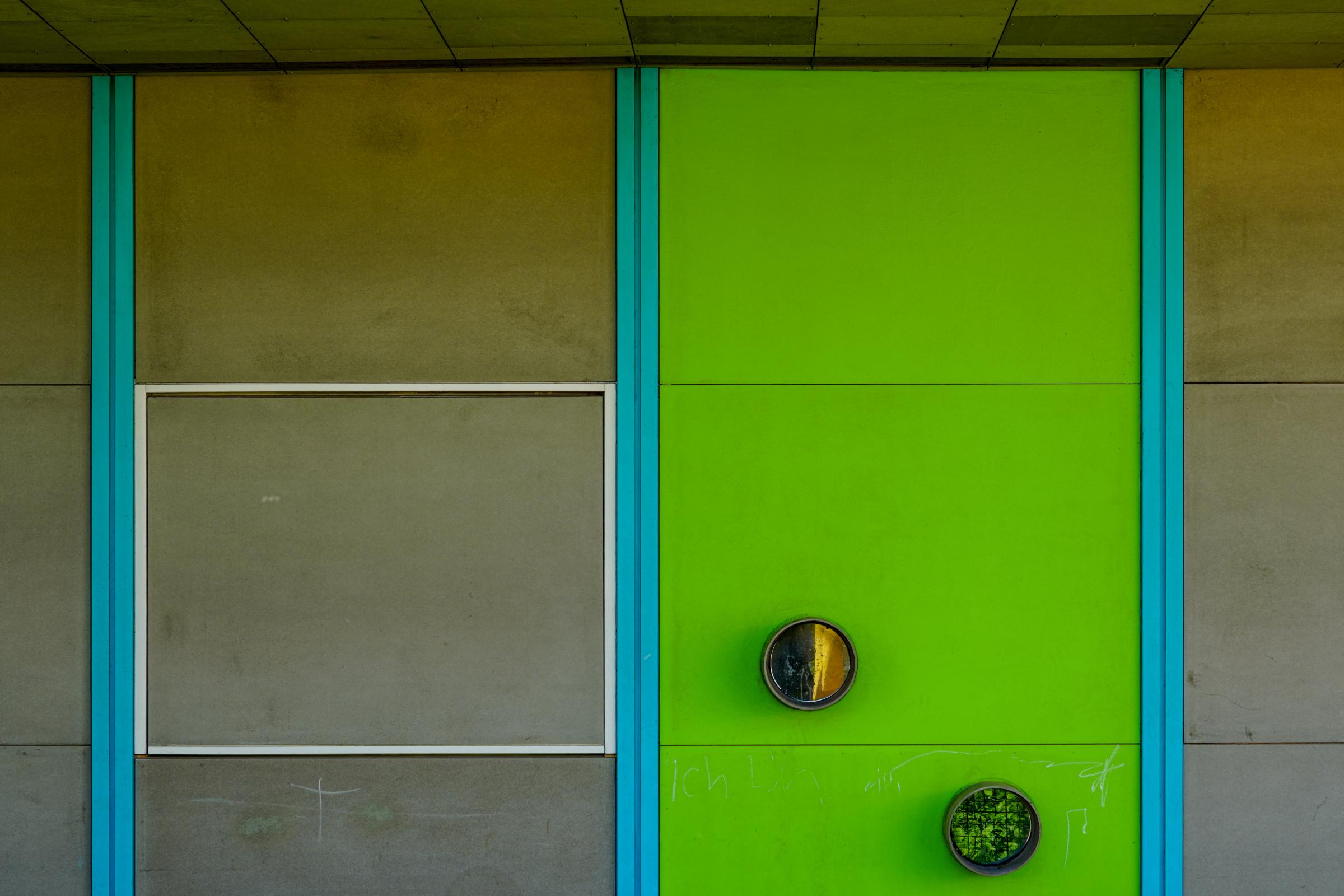 Munich, Germany
# 3425
5/2022
Exterior facade of the Ecumenical Church Center in the Olympic Village in Munich with small round windows. The building is surrounded by a pedestrian level. During the 1972 Olympic Games, international church services were held here in 14 languages. The center was realized by the Munich architects Christ and Karg. It houses the Catholic and Protestant church rooms under one roof. 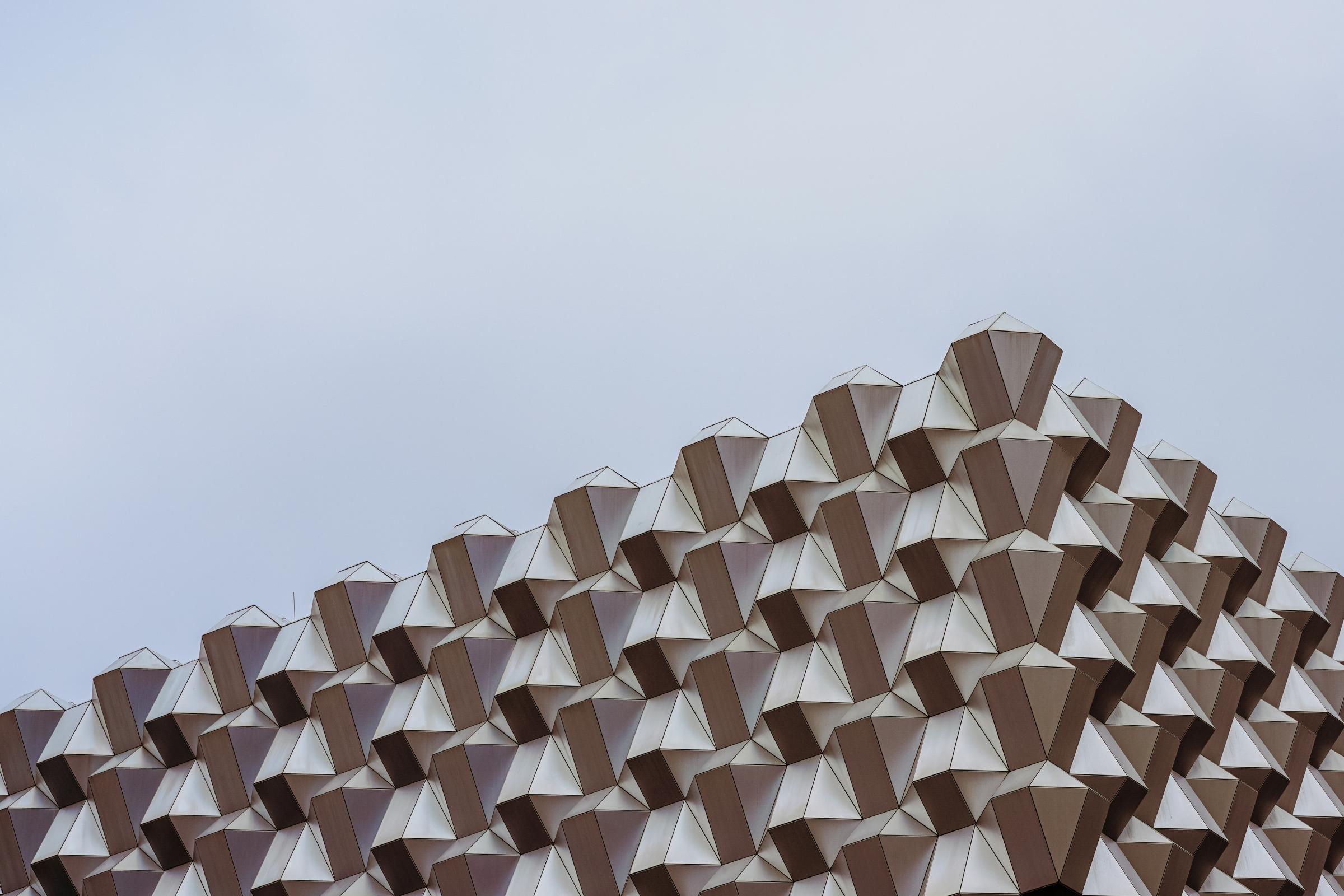 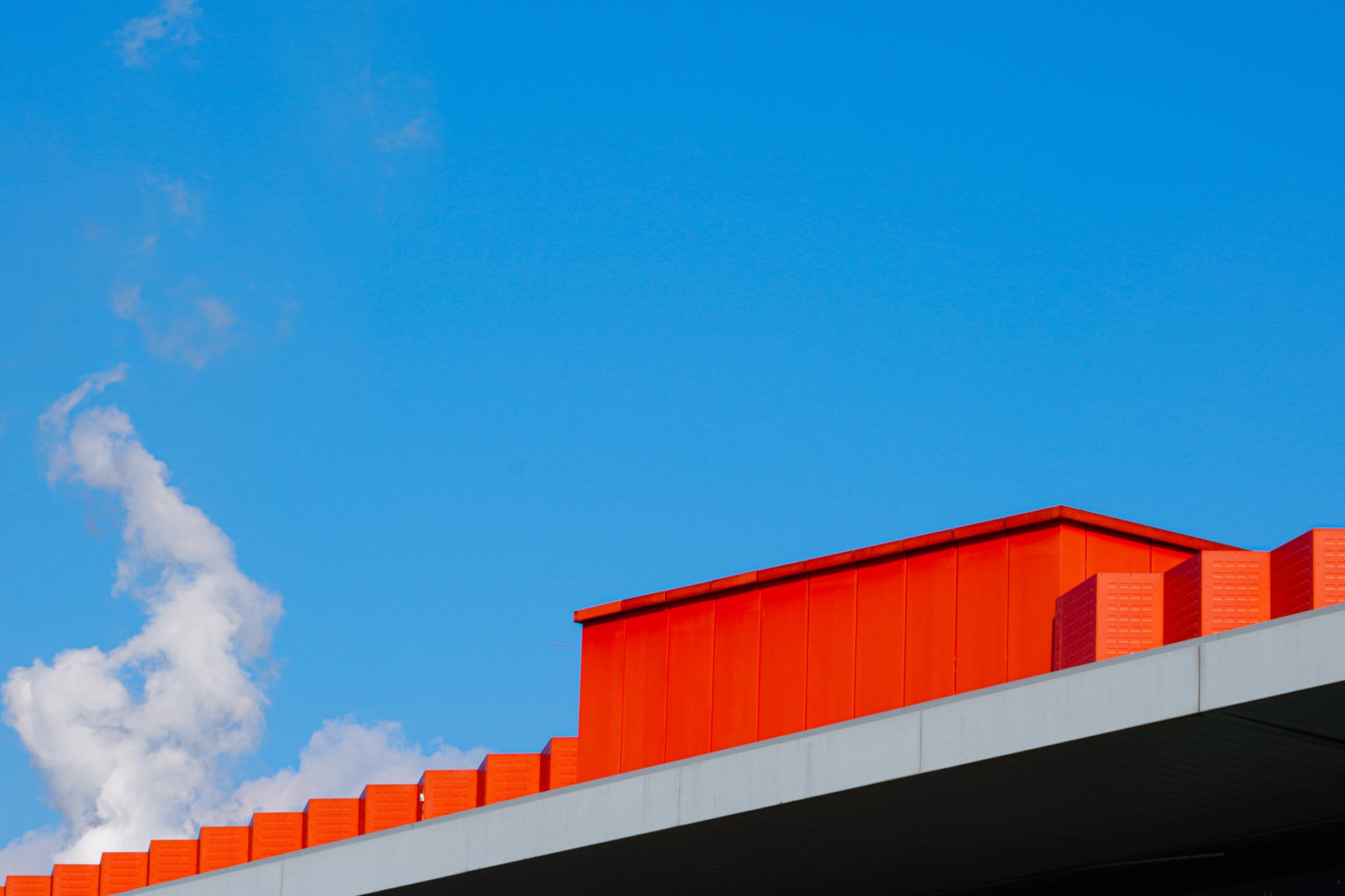 Salzburg, Austria
# 3139
3/2022
Part of a roof of the multi-storey car park in Europark Salzburg, designed by Italian architect Massimiliano Fuksas. 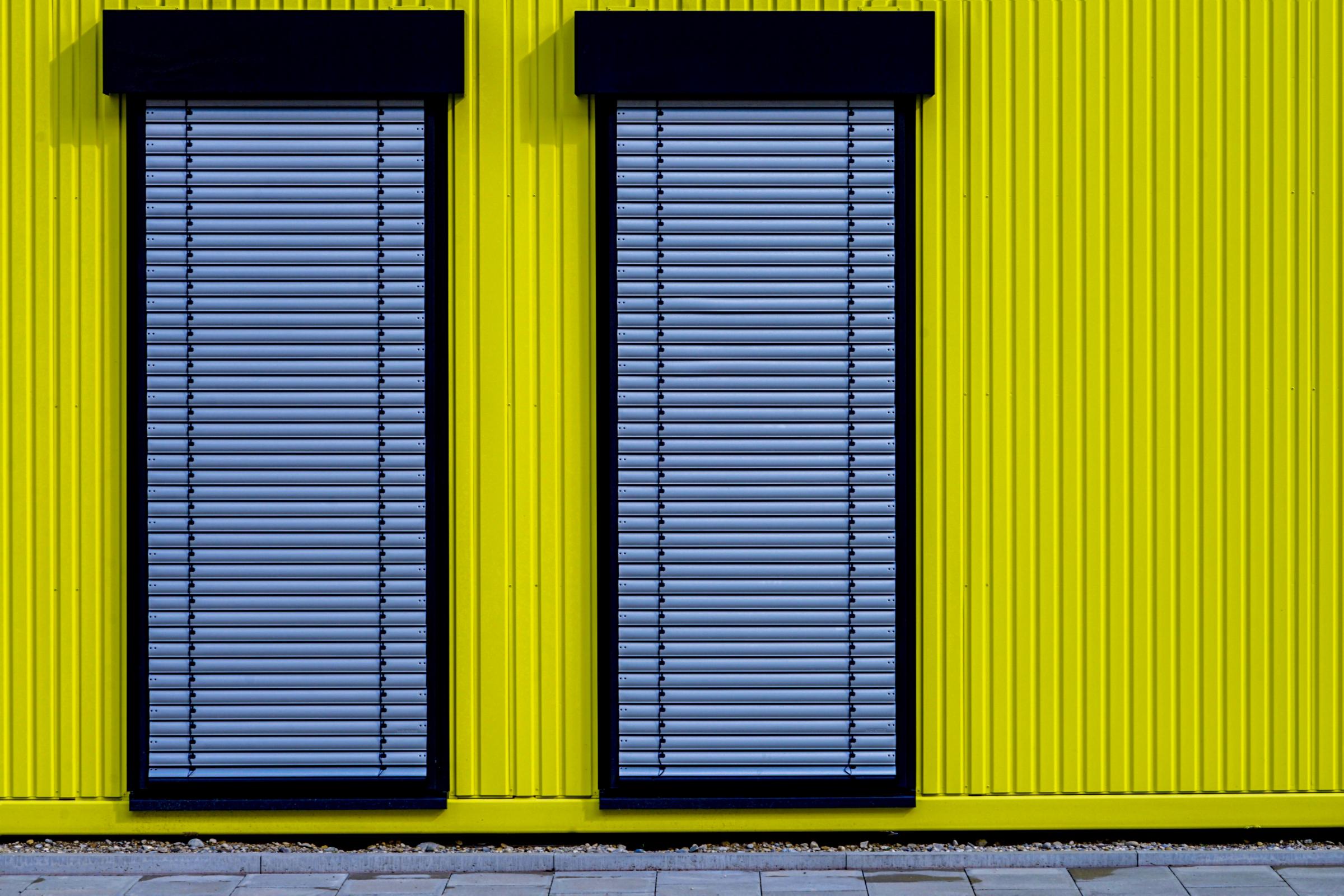 Munich, Germany
#1965
8/2021
Closed windows of a studio container in the Schwabing district. 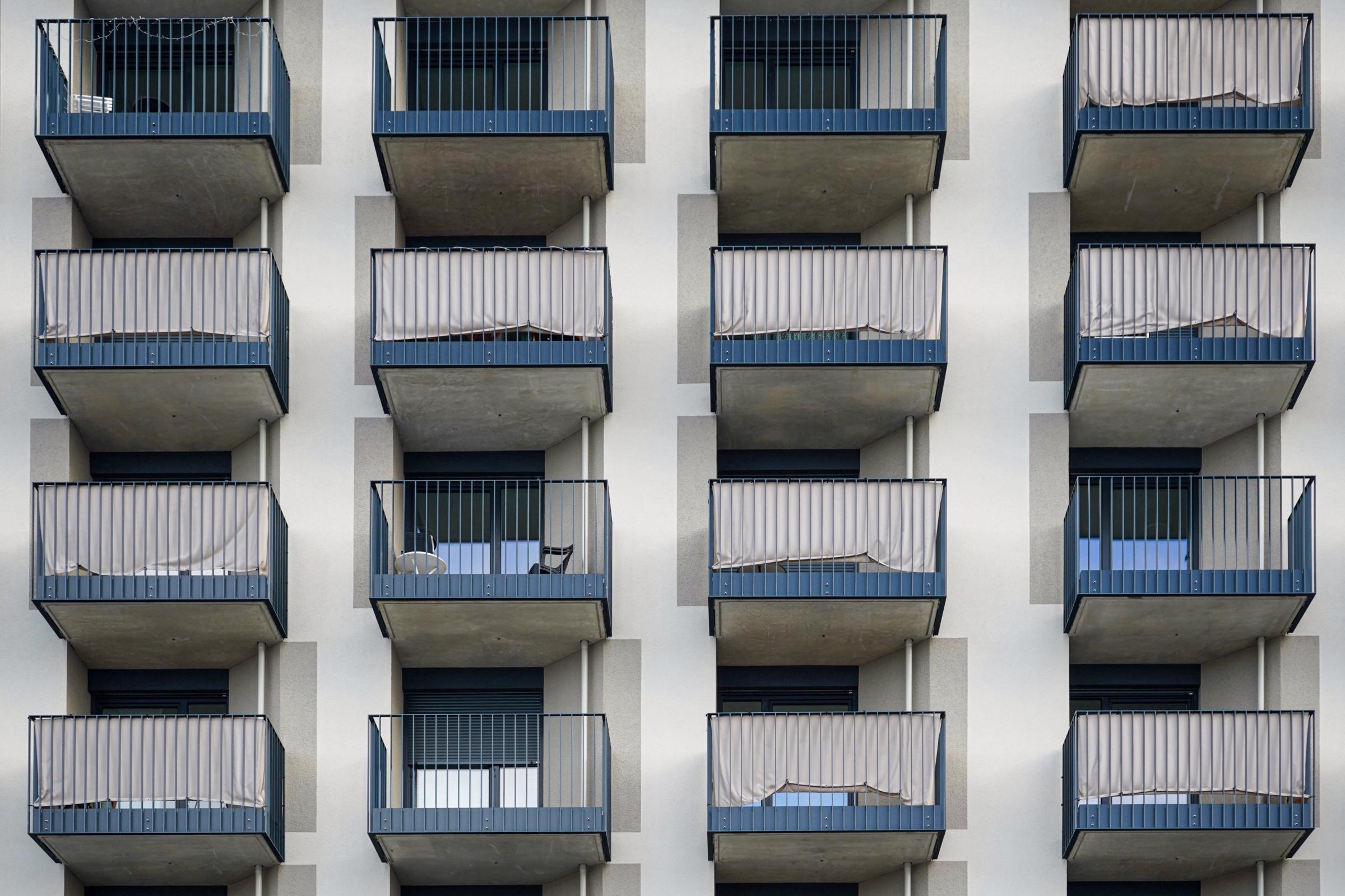 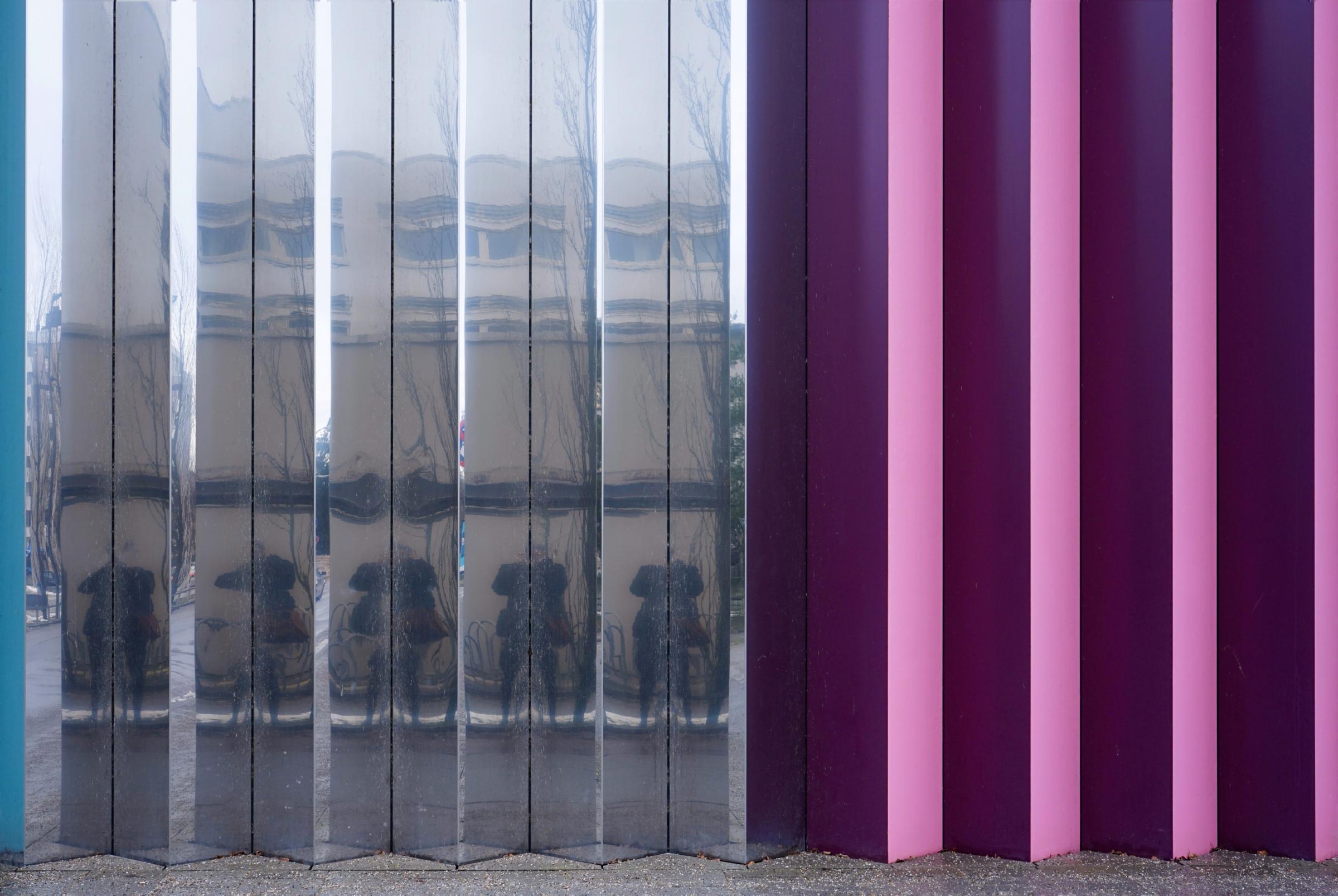 Munich, Germany
# 1298
10/2021
The MIRA Shopping Center opened in 2008 in the Munich district Nordhaide. The West, North, and northern half of the Eastern facades, was made of colored lacquered metal panels which were placed on the walls to form prisms. Since the sides of the prisms have different colors, the façade appears from the southwest and northwest in different colors. In between, a gradual transition takes place, so that the building changes dynamically as one passes by. In addition to the colored panels, the façade also contains panels made of polished aluminum, which reflect the sky and surrounding buildings. The façade construction was awarded with the “DGNB Gold Award for sustainable buildings" in 2009. The shopping centre was planned by Chapman Taylor. The responsible project architect there was Ruprecht Melder. Léon-Wohlhage-Wernik Architekten was responsible for the façade design.

Nguyensminiaturen Photography by Michael Nguyen Munich GAUTING By The Roadside