In his series “Urban Discoveries”, Michael Nguyen shows looks at buildings in the urban landscapes of European cities. (ongoing) 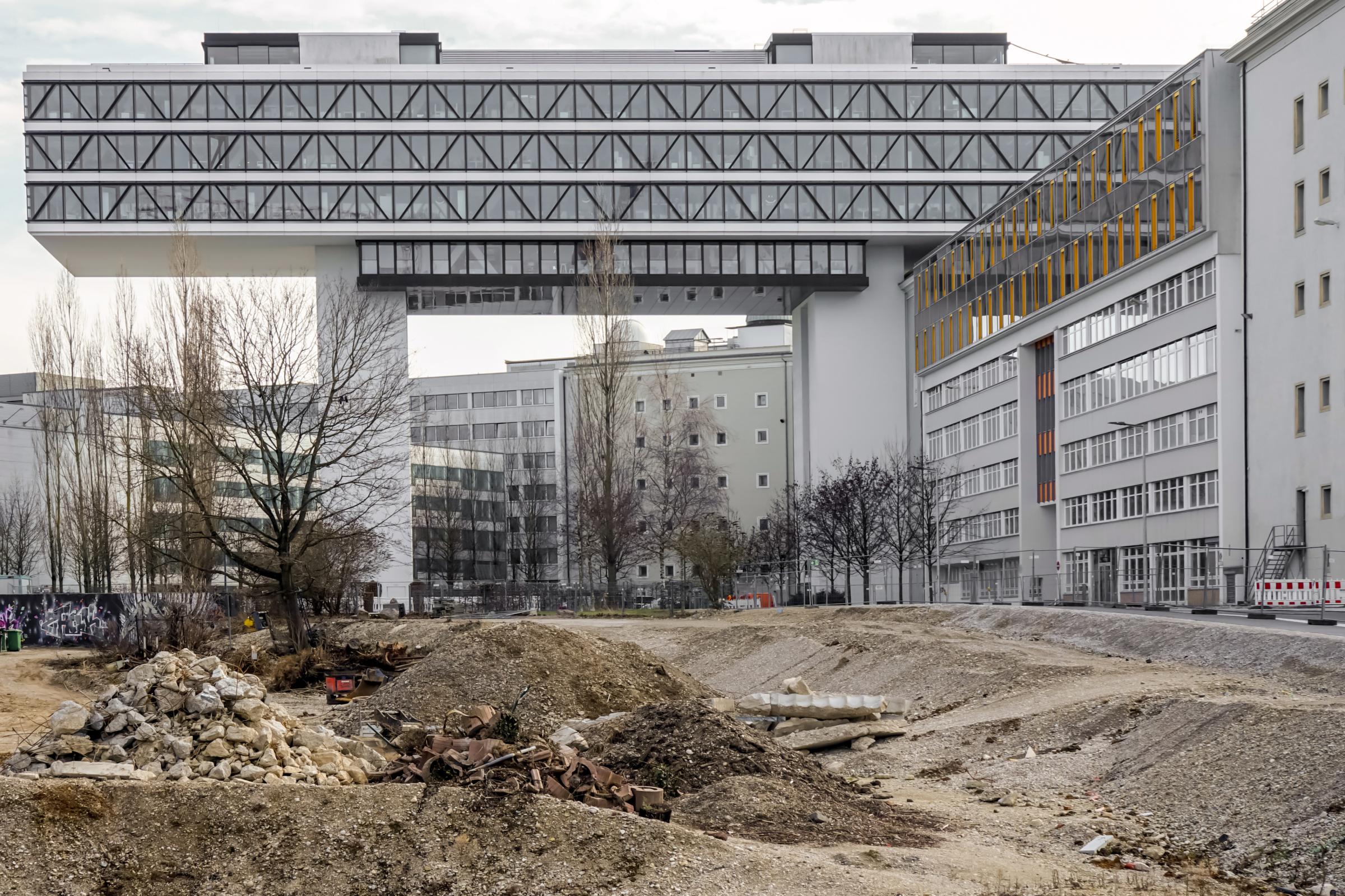 Munich, Germany
# 1228
2/2021
The Media Bridge Munich is a high-rise building in Munich’s Werksviertel district, 90 meters in length and 23 meters in depth, the maximum height is 46 meters. It was designed by Otto Steidle. Loft offices predominantly for companies in the media industry and an event and conference area stand on a very cramped site. On top of this is a four-story structure measuring approximately 90 meters by 23 meters that appears to float above the existing buildings.
Awards
2011 LEED Gold
2011 red dot design award - honorable mention
2013 GREEN GOOD DESIGN AWARD 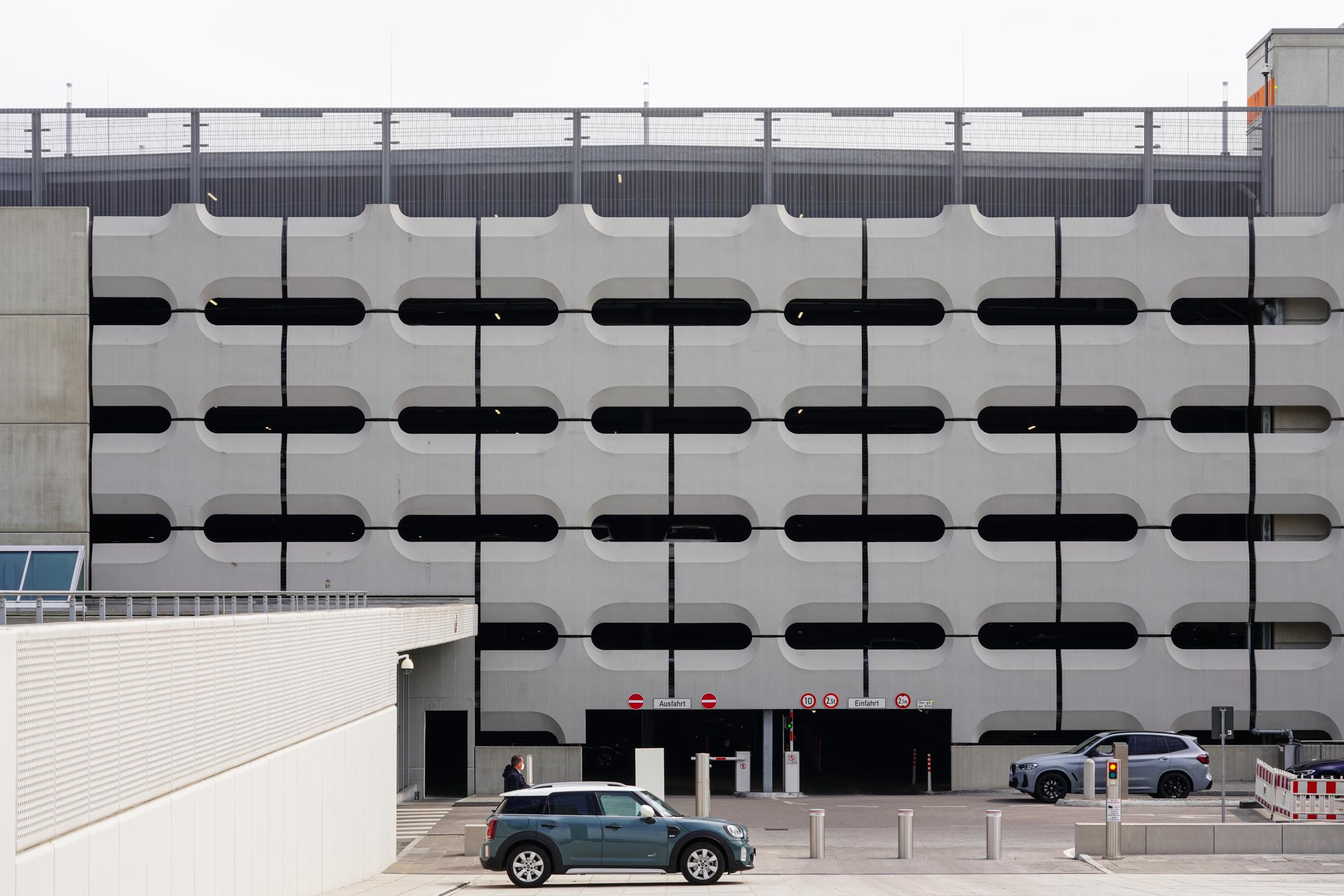 Munich, Germany
# 3328
4/2022
The BMW Group parking garage, designed by Karl Schwanzer is designed for 1600 vehicles and fits harmoniously into the ensemble of BMW buildings in Munich. Two cars in front of the parking garage seem to be formally coordinated with it, as if they had been parked there specifically for a carefully planned composition. Bollards, litter garbage cans and opening columns, in their gleaming cylindrical form, blend into the staccato of perfected materiality and form. Even their edgings in the ground and the lids of the openings in the street follow the same pattern. 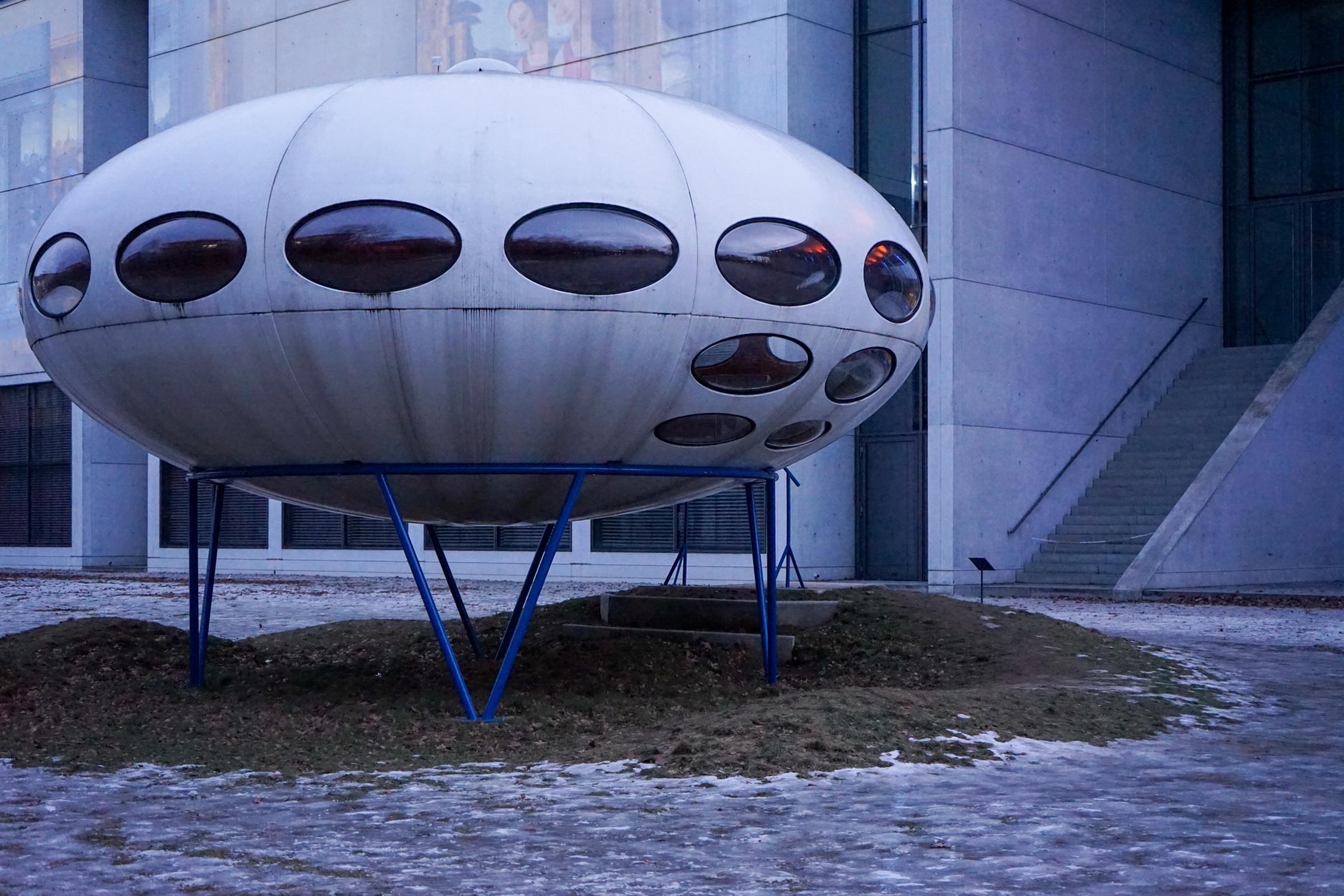 Munich, Germany
# 3092 - Munich
1/2021
Futuro House by Finnish architect Matti Suuronen in front of the Pinakothek der Moderne in Munich. Developed in 1968 by Matti Suuronen, the Futuro is a 36 m² ellipsoidal round house made largely of plastic and standing on a metal framework. The house has the shape of a flattened rotational ellipsoid and is made of fiberglass with polyurethane insulation. It measures 8 meters in diameter, is 4 meters high and weighs 4 tons with complete furnishings. 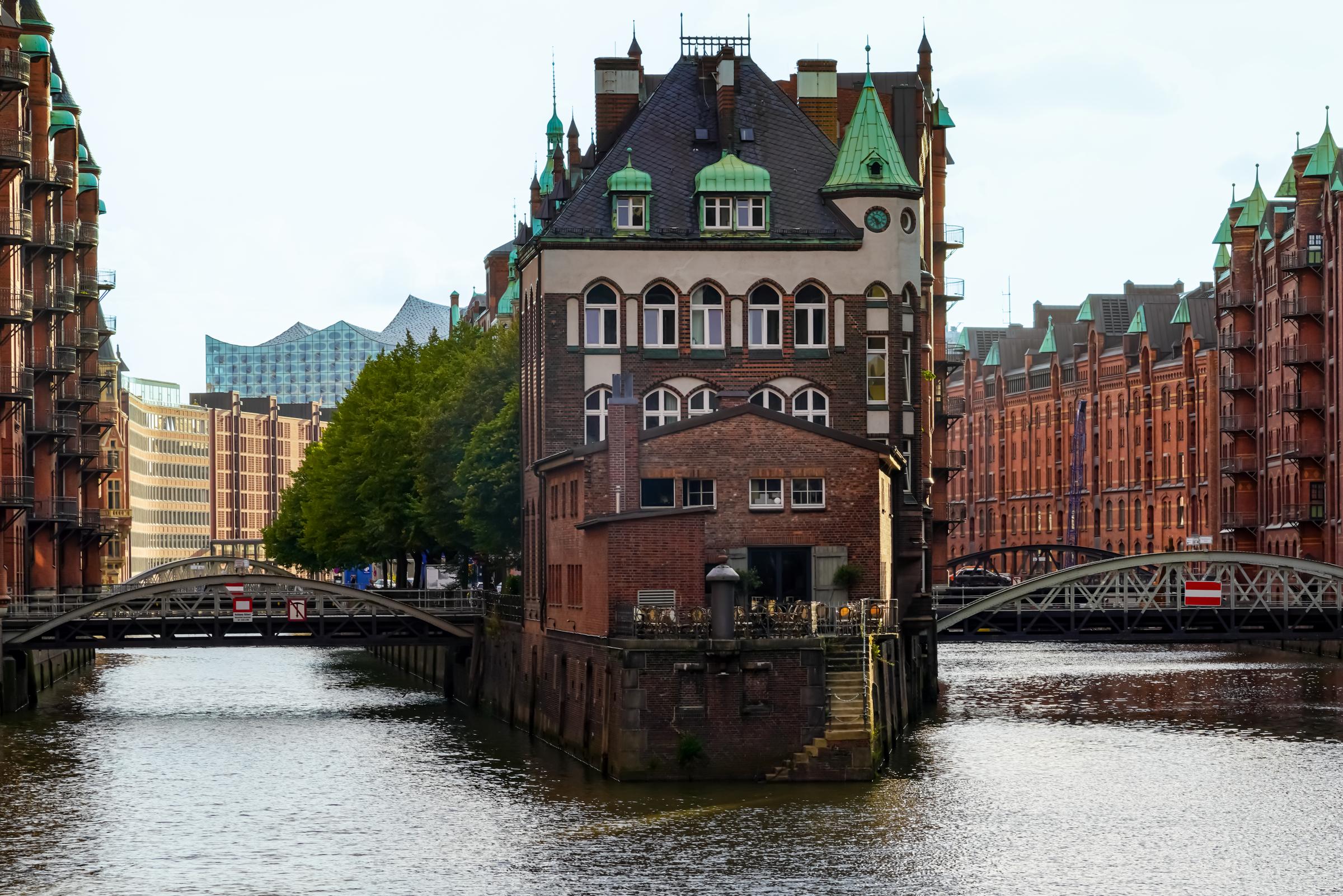 Hamburg, Germany
# 3808
11/2022
The moated castle is located on a peninsula between two canals: at the confluence of Wandrahmsfleet and Holländischbrookfleet. The four-story building was built between 1905 and 1907 and is one of the best known landmarks and oldest buildings in the historic warehouse complex. The design is believed to have been based on designs by two Hamburg architects, Bernhard Georg Hanssen and Wilhelm Emil Meerwein. The brick facade has historicist forms and was fitted with glass tile bands and articulations in granite. Other features include the green copper roof, tall arched windows and round oriels. The single tower is a clock turret with decorative bands of green glazed brick and red granite stones.

Hamburg's Speicherstadt is the world's largest historic warehouse complex, located in the Port of Hamburg. It has been a listed monument since 1991 and, together with the neighboring Kontorhausviertel, has been inscribed on the UNESCO World Heritage List under the name Speicherstadt and Kontorhausviertel with Chilehaus since 2015. Construction of the Speicherstadt began in 1883. The warehouses (Speicher) in neo-Gothic brick architecture are founded on thousands of oak piles and are connected to the water (Fleet) on one side and to the street on the other. Coffee, tea and spices were stored on five floors, one above the other, each accessible by its own winch mounted on the gable of the house. The Speicherstadt is located in an area that can be flooded by the Elbe water during a storm surge, making the lower floor unsuitable for storage. Today, the usable area of the Speicherstadt is about 630,000 square meters and houses various museums in addition to numerous carpet dealers and agencies. 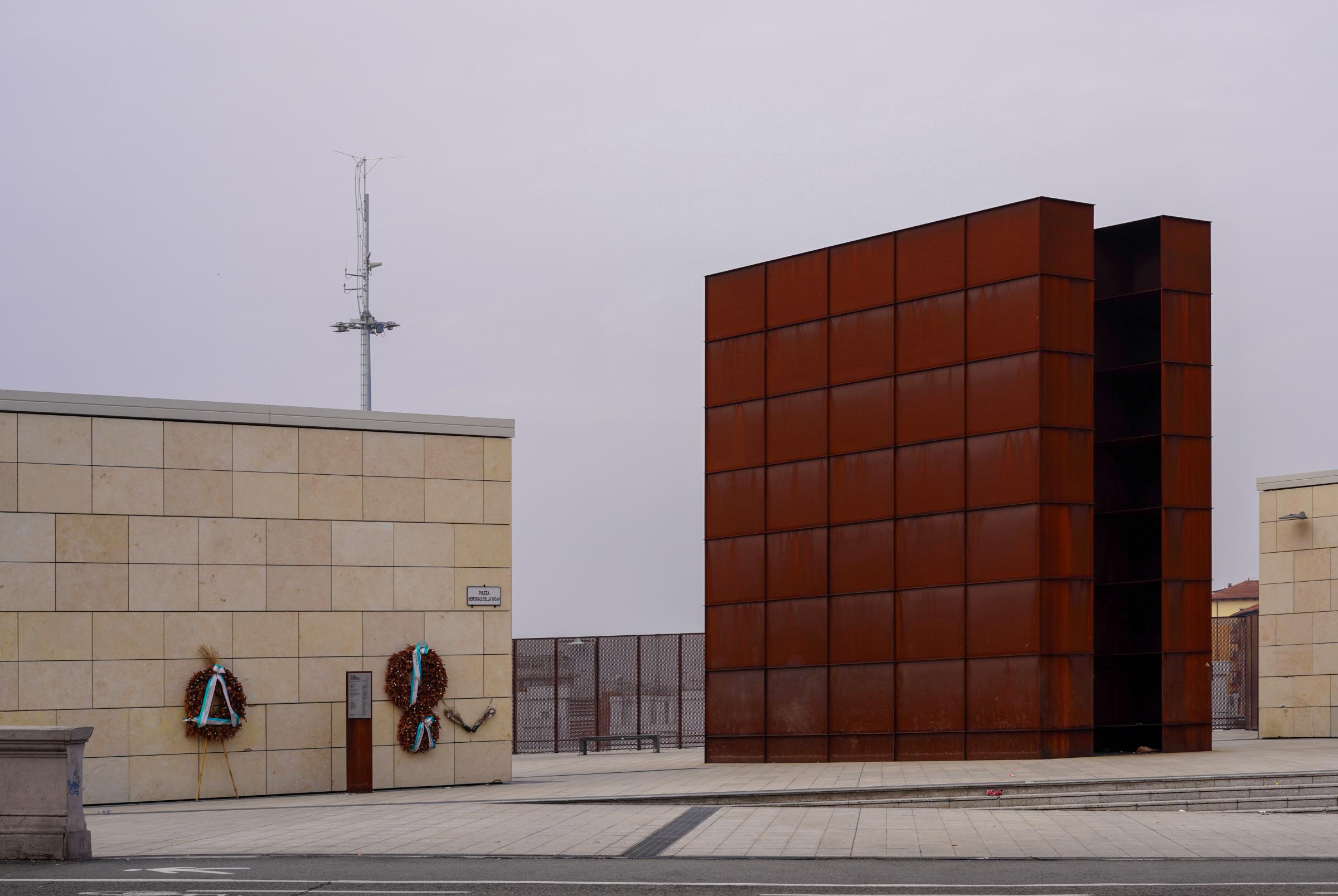 Bologna, Italy
# 3804
11/2021
In 2016, the Shoah Memorial was inaugurated in Bologna. It was realized by the SET architectural team. The memorial of the Shoah in Bologna is located in the center of the city, at the main train station. It consists of two blocks with external heights of 10 x 10 m each. The two elements face each other, leaving space for an internal passage that becomes narrower and narrower, and is intended to evoke a feeling of trepidation in the visitor. 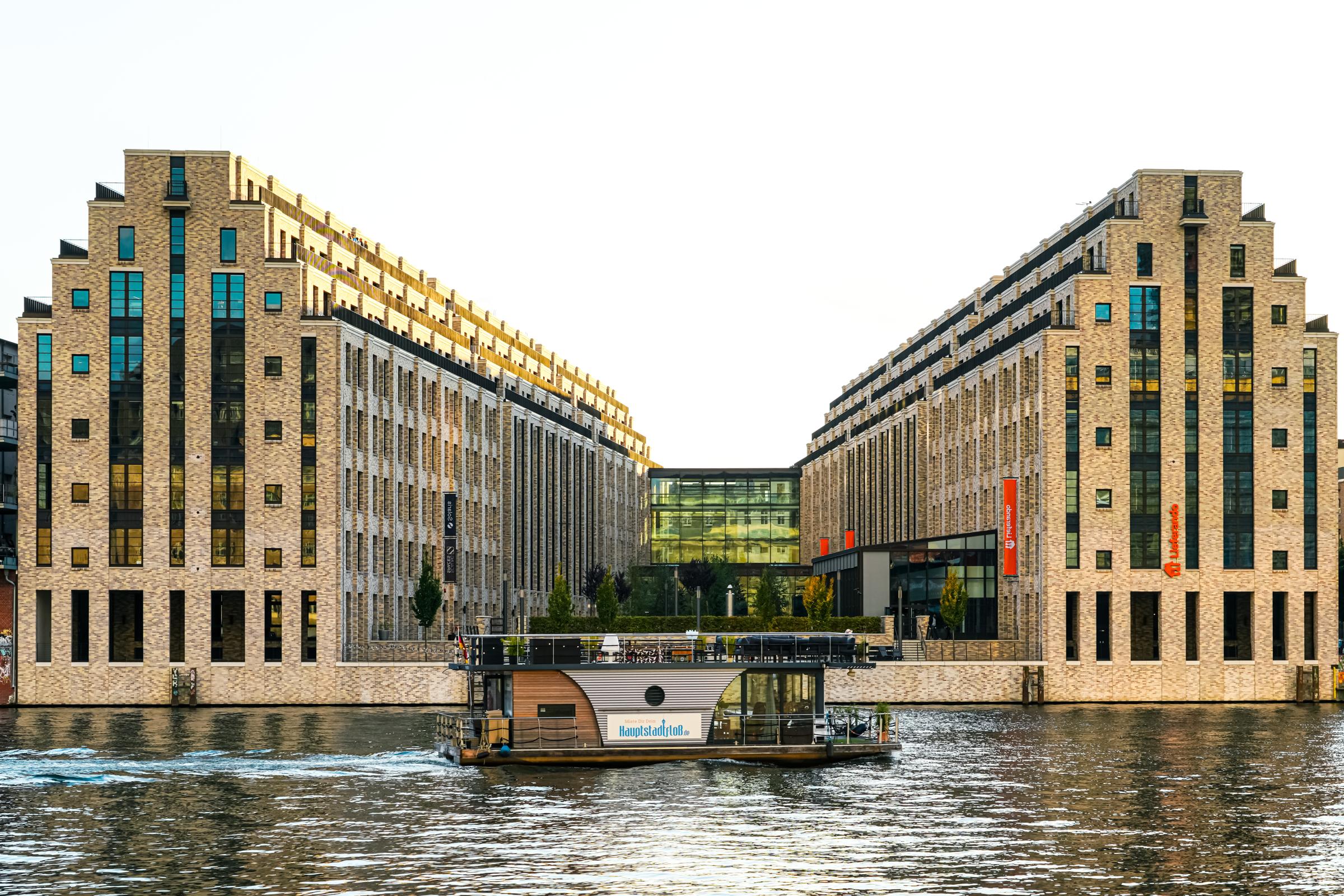 Berlin, Germany
# 3806
9/2022
View of two office and commercial buildings of the Cuvry Campus by Tchoban Voss architects, on the Spree near the Oberbaumbrücke in Berlin-Kreuzberg. The building structure and façade design make direct reference to the building's location in the former city harbor area. The bright clinker facades are a reference to industrial architecture and take up the materiality of the warehouse in the existing development. 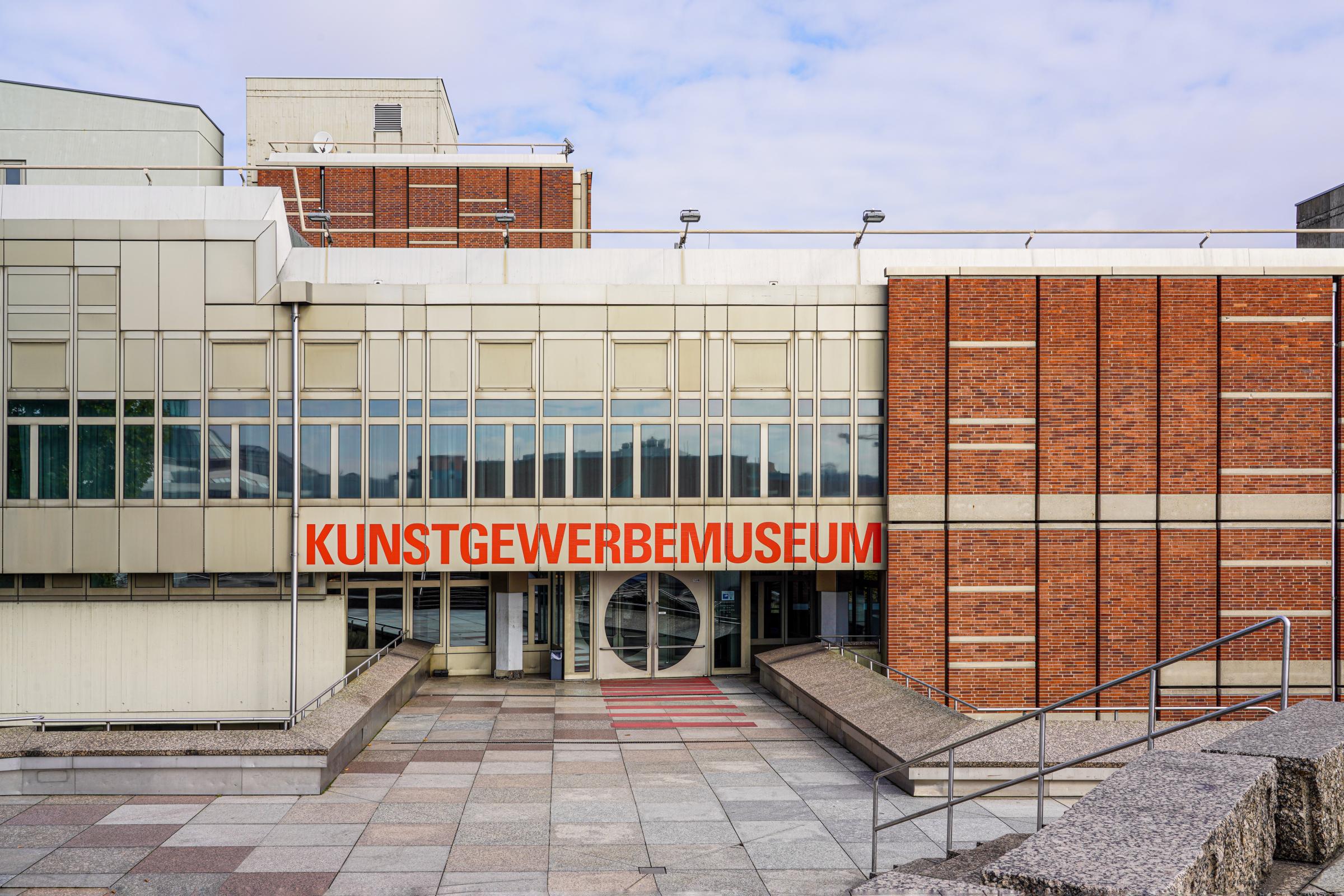 Berlin, Germany
# 3805
9/2022
The Museum of Decorative Arts (1978-1985, Rolf Gutbrod) on the Grounds of the Kulturforum Berlin in the Tiergarten district of Mitte, an urban area between the Landwehrkanal, Großer Tiergarten and Potsdamer Platz, which includes museums, libraries and music halls museums, function rooms and various facilities. 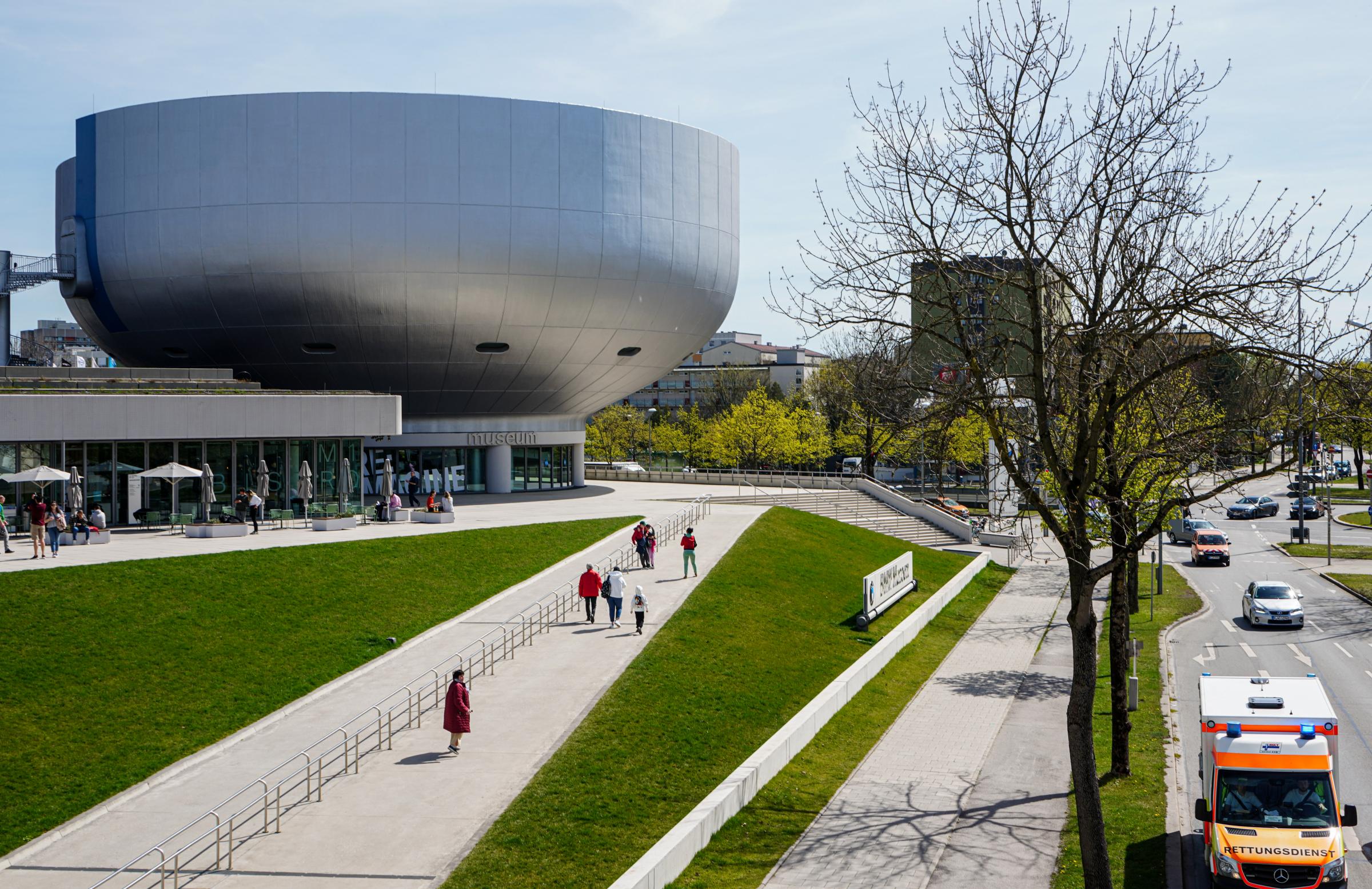 Munich, Germany
# 3802
4/2022
Numerous tourists are in front of the BMW Museum in Munich. An ambulance passing by. The BMW Museum is the company-owned automobile museum of the automobile manufacturer BMW. Also known as the Salad Bowl or the White Sausage Cauldron, the silver-futuristic building was designed by the architect of the BMW skyscraper, Viennese Professor Karl Schwanzer. 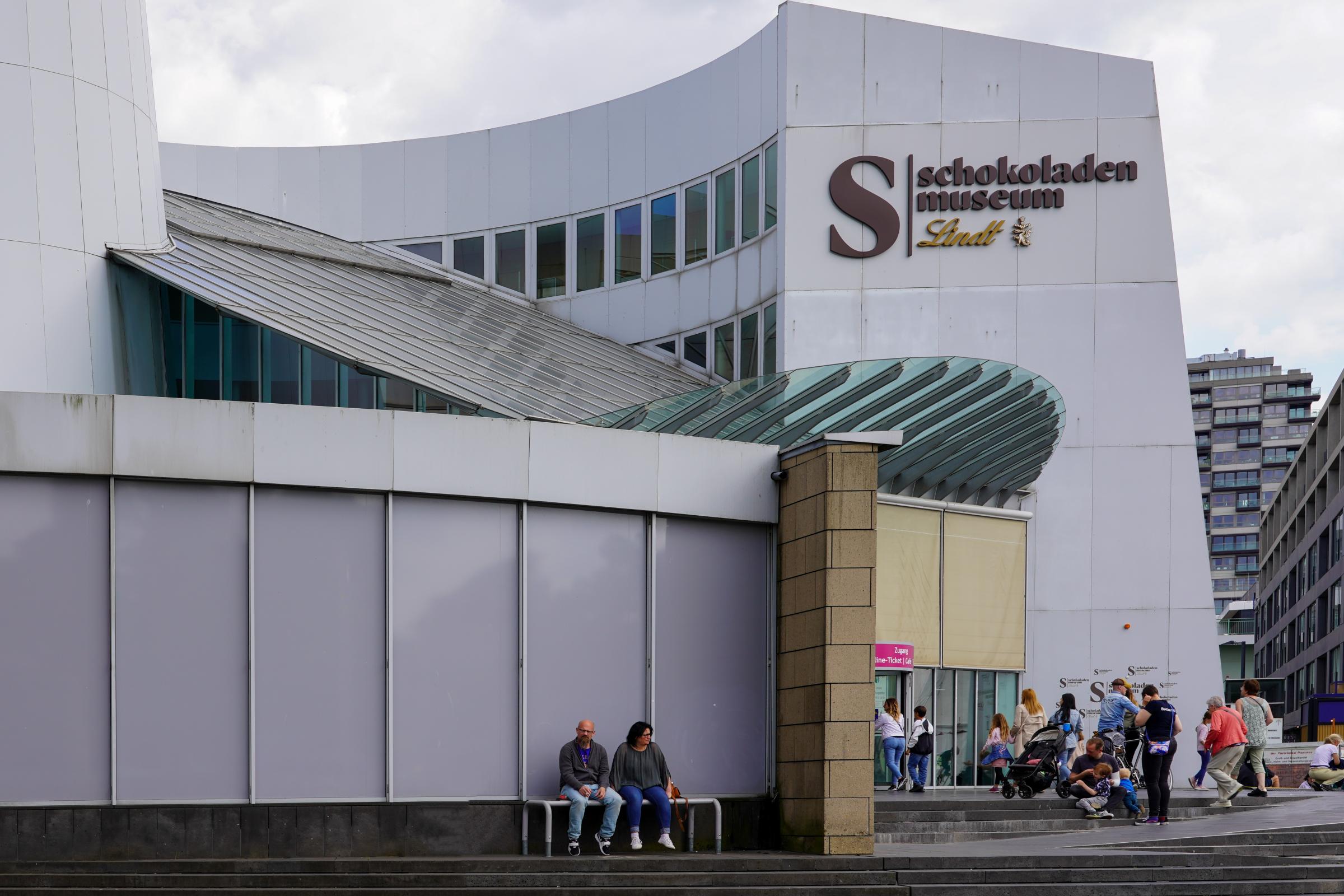 Cologne, Germany
# 3799
8/2022
People in front of the Chocolate Museum Cologne, a special cultural-historical museum for chocolate in the Altstadt-Süd district of Cologne. Located on a peninsula in the Rheinauhafen, the exhibition building houses, among other things, a collection on the history of chocolate and a permanent exhibition on modern chocolate production. 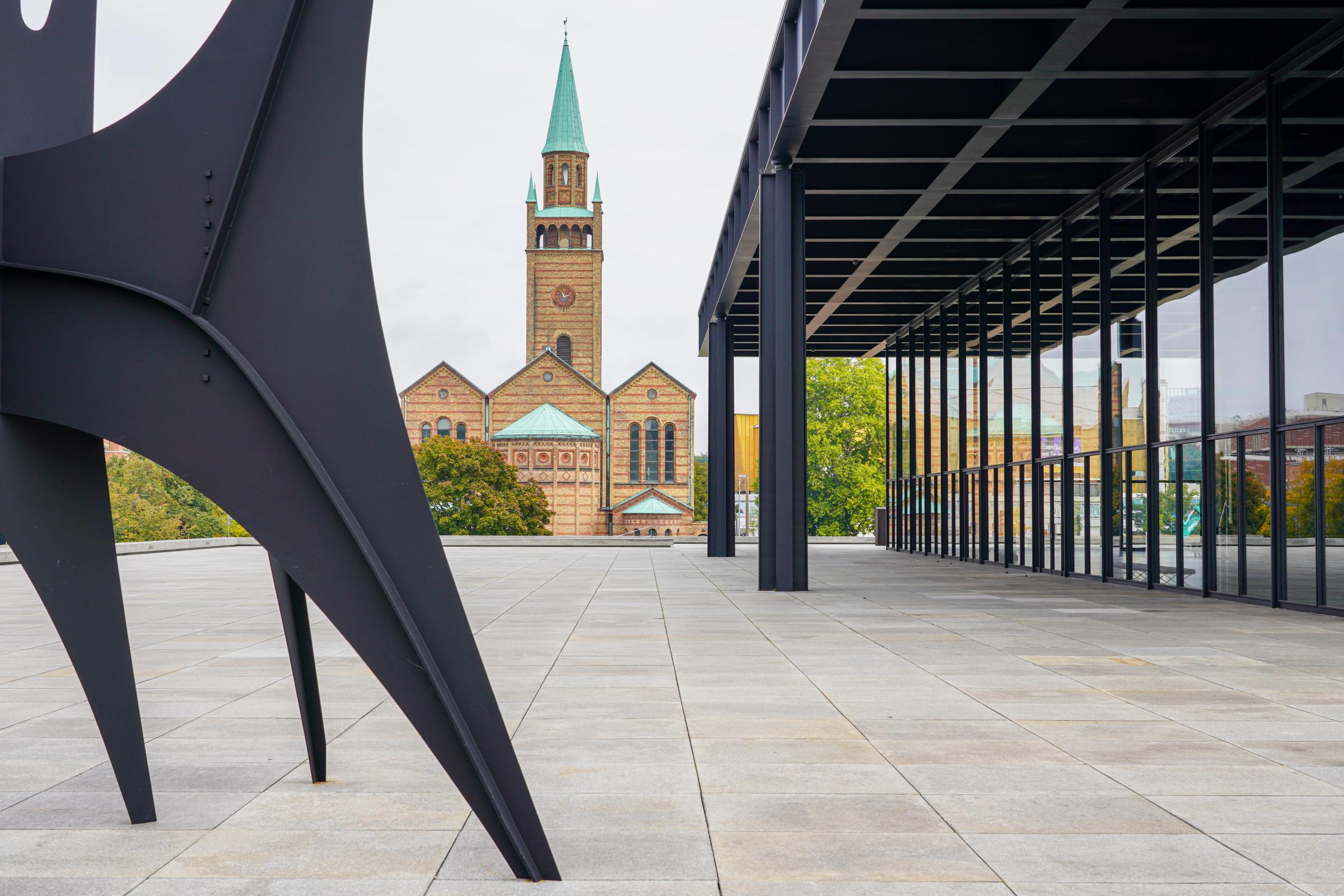 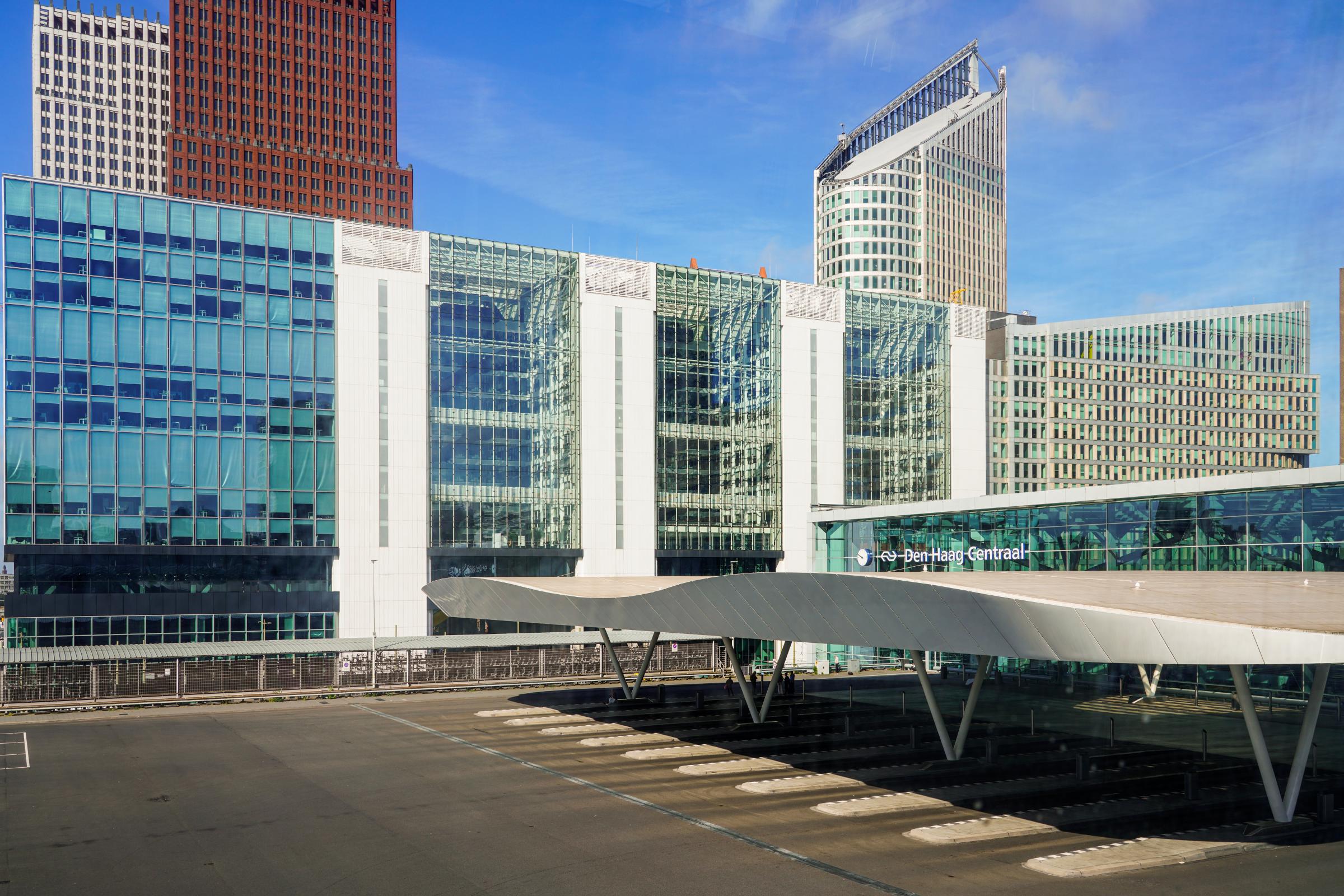 The Hague, The Netherlands
# 3607
7/2022
Empty bus stop in front of the train station Den Haag Centraal which is covered with a futuristic flat roof. 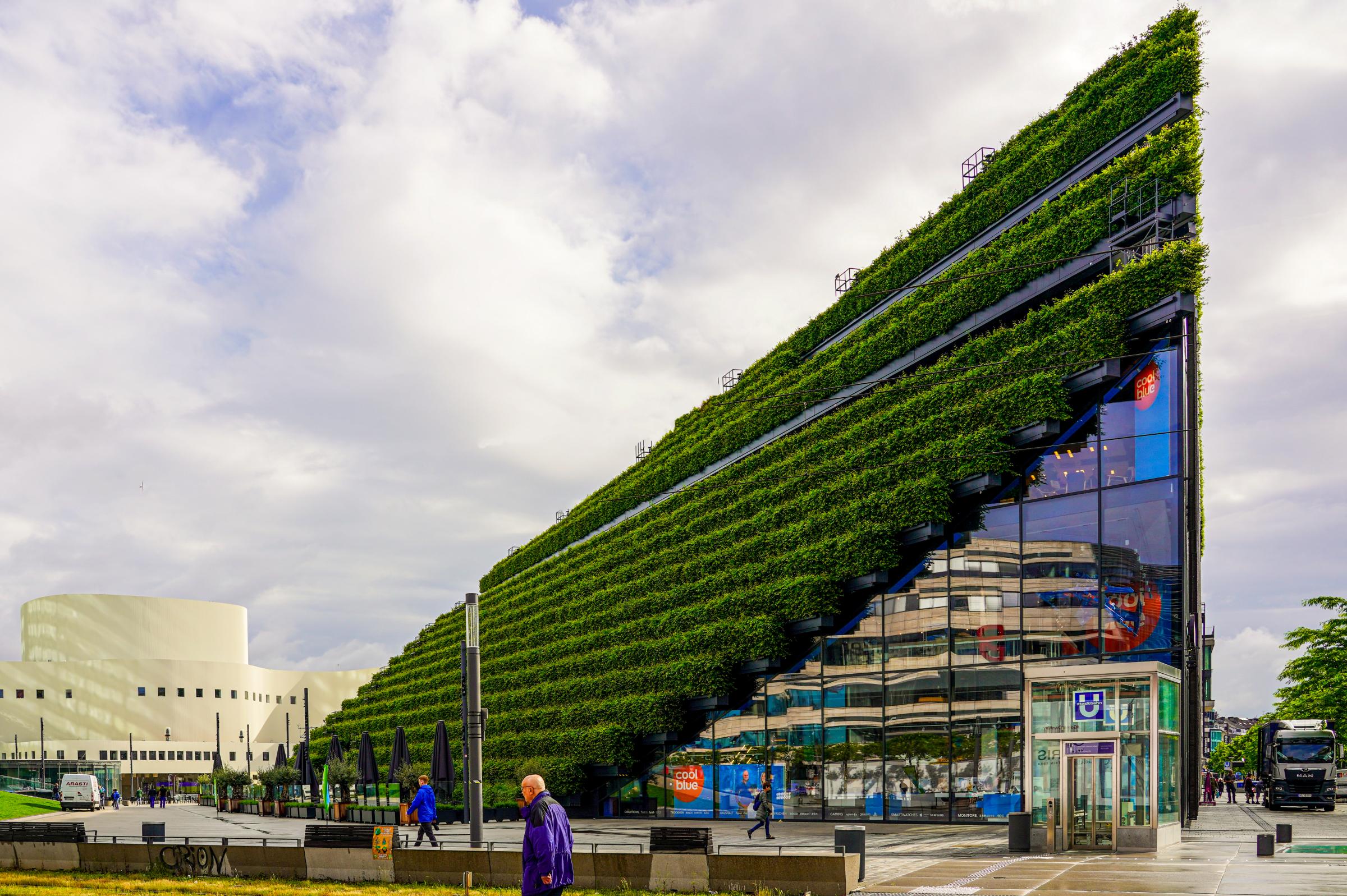 Düsseldorf, Germany
# 3662
5/2022
Europe's largest building with a green facade to improve the city's climate, the Kö-Bogen II in Düsseldorf, office and commercial building with stair-shaped 8 km hornbeam hedges, designed by Ingenhoven architects. The green building envelope requires regular maintenance. For this purpose, walkways are installed between the hedges and drive-on systems in the vertical areas. On the left in the picture the Gustaf-Gründgens-Platz and the Schauspielhaus. 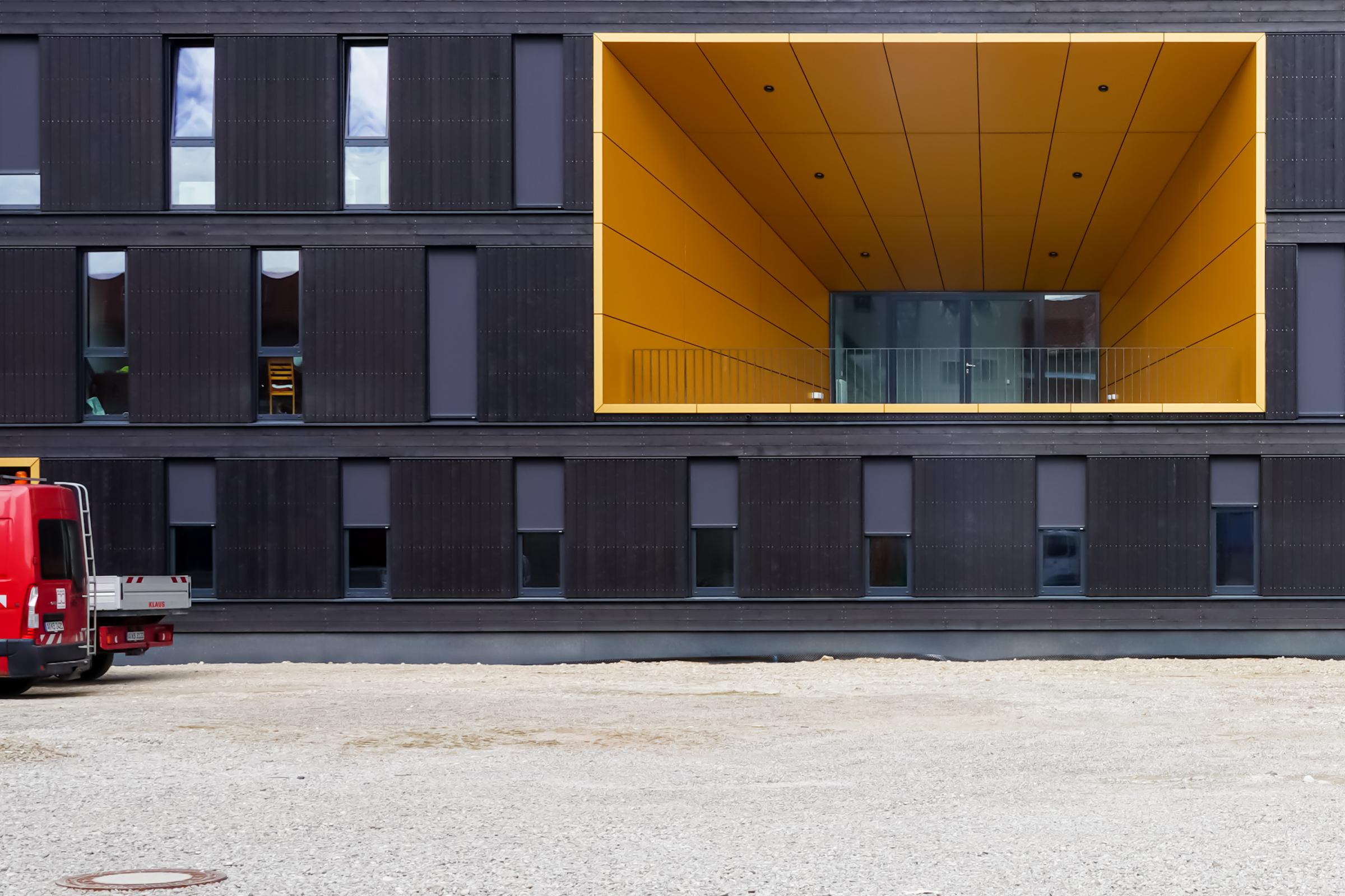 Augsburg, Germany
# 3780
9/2022
The Musikbox - Part of a Centre for Culture and Creative Industries on a Gasworks Site.Another step for the Gaswerk site in Augsburg towards a centre for culture and creative industries has been completed. The Musikbox, a new building for around 50 rehearsal rooms for musicians. In addition, rehearsal rooms that can be rented by the hour or day.  The large loggia can be used by bands for concerts. The building was constructed using a sustainable, largely prefabricated timber hybrid construction method. The gasworks in Augsburg-Oberhausen is an industrial monument of European significance. It is one of the best-preserved complete ensembles of a gasworks. Since the end of 2015, the owners swa, together with the city of Augsburg, have been developing the approximately 70,000 square metre site with its historic industrial cathedrals into a centre for culture and the creative industries. 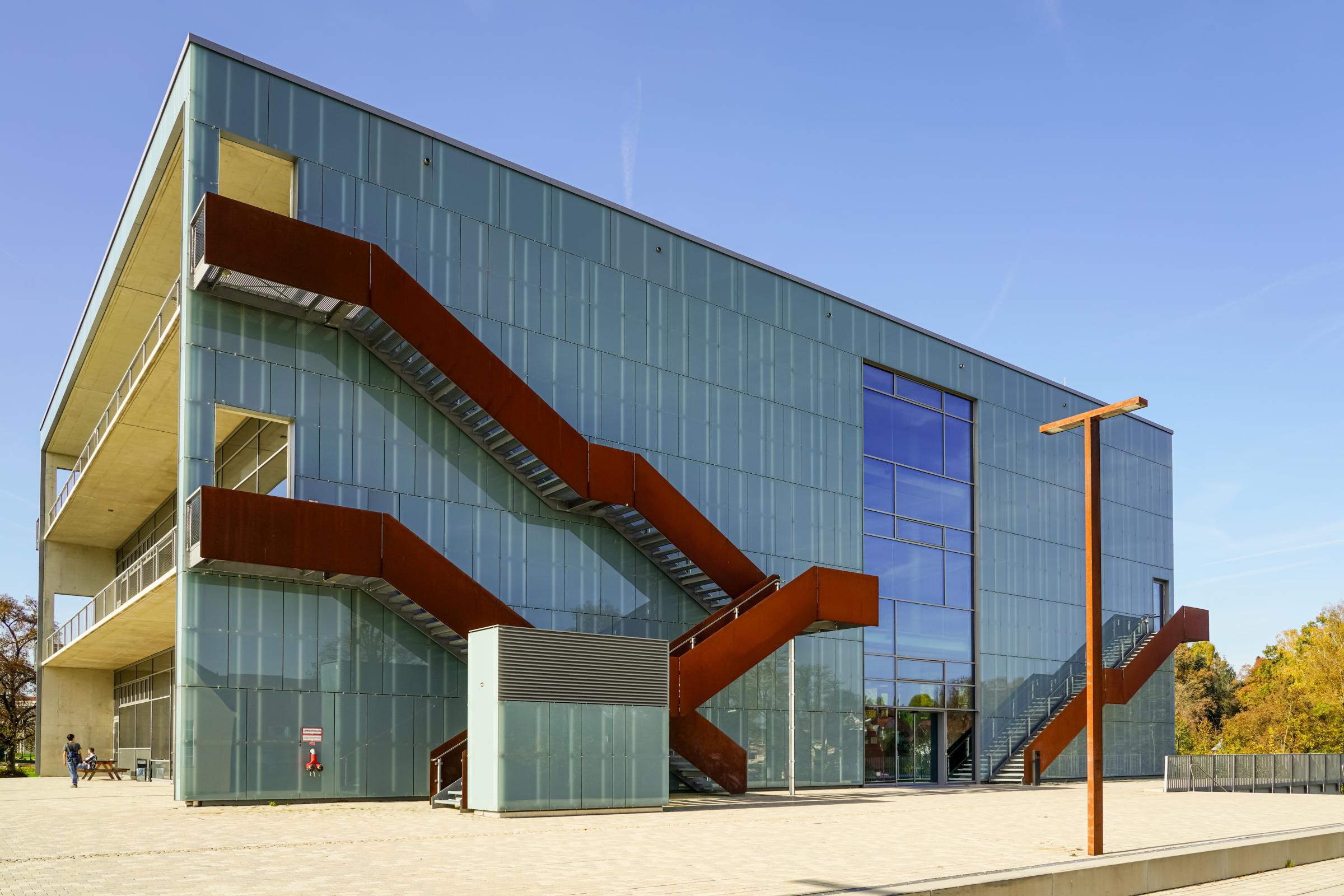 Freising, Germany
# 3794
10/2022
Building of the Weihenstephan-Triesdorf University of Applied Sciences, Faculty of Sustainable Agricultural and Energy Systems in Freising near Munich. 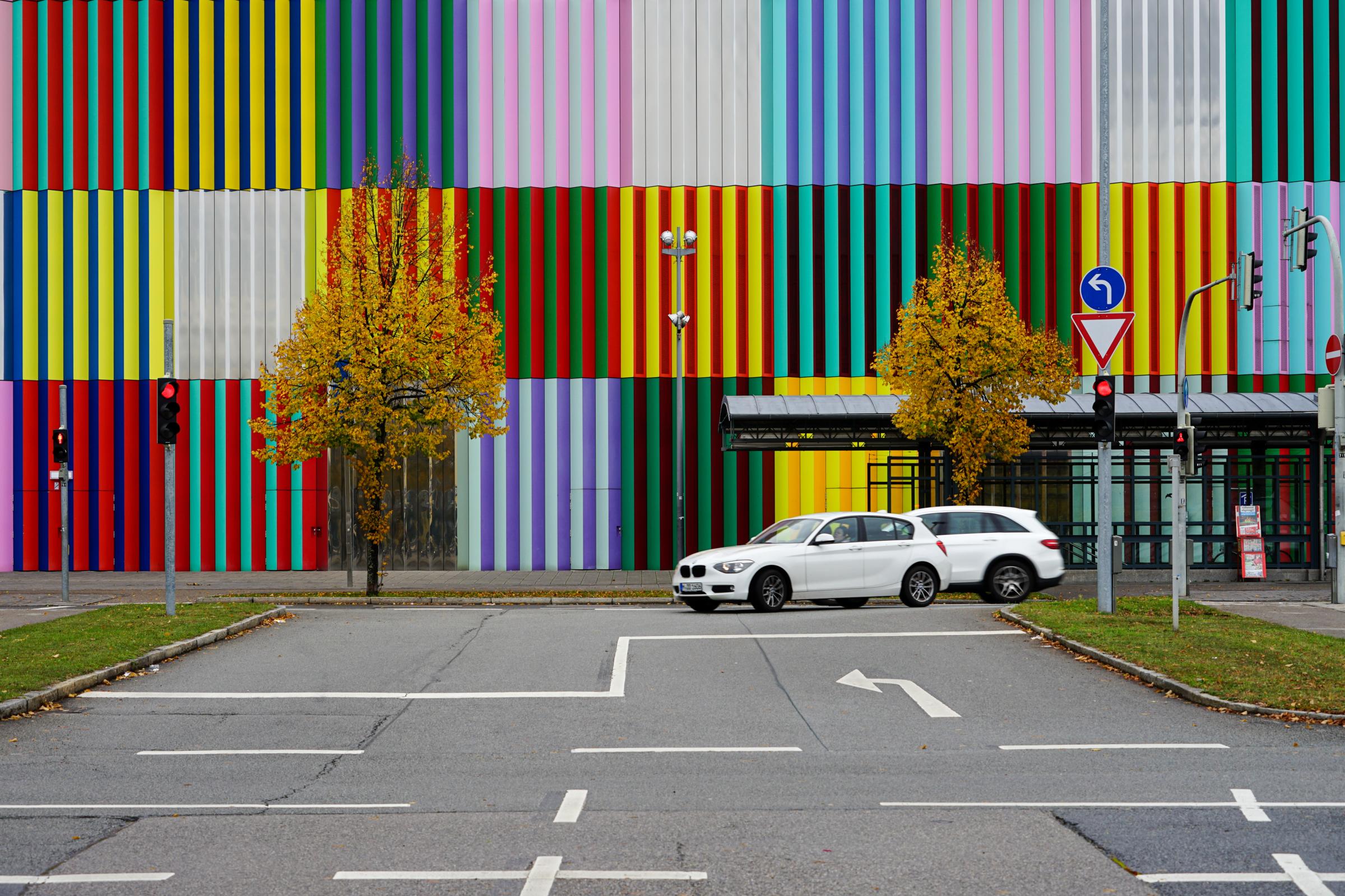 Munich, Germany
# 3795
10/2020
Parts of the facade of the MIRA shopping center in Munich consist of brightly painted metal plates that have been attached to the walls in the form of prisms. In between, there is a gradual transition so that the building changes dynamically as you pass by. The façade construction received the 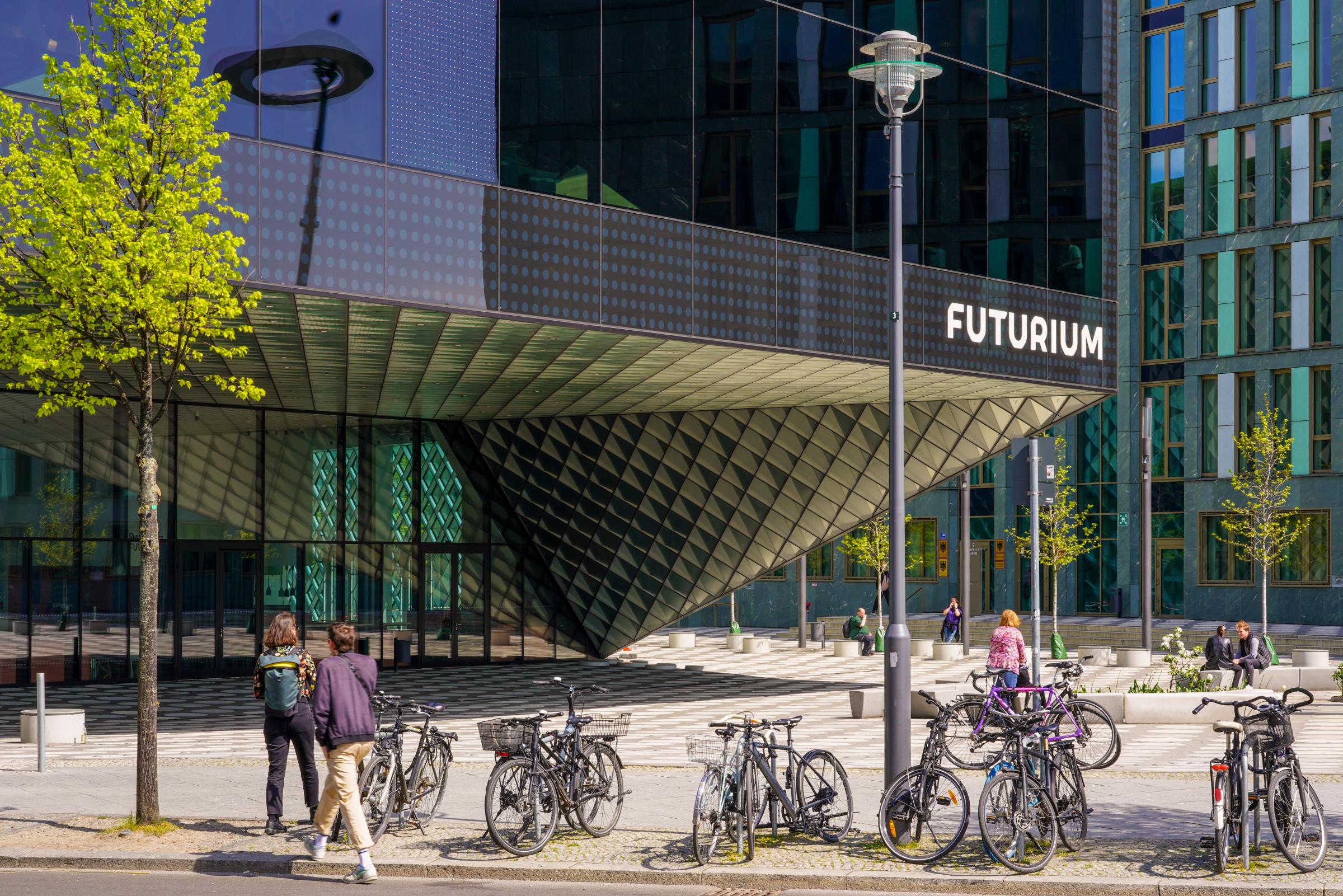 Berlin, Germany
# 3791
4/2022
People in front of the Futurium in Berlin, a museum dedicated to the presentation and dialogue on science, research and development, which opened in 2019. Design by Berlin architects Richter und Musikowski in collaboration with JUCA landscape architecture. 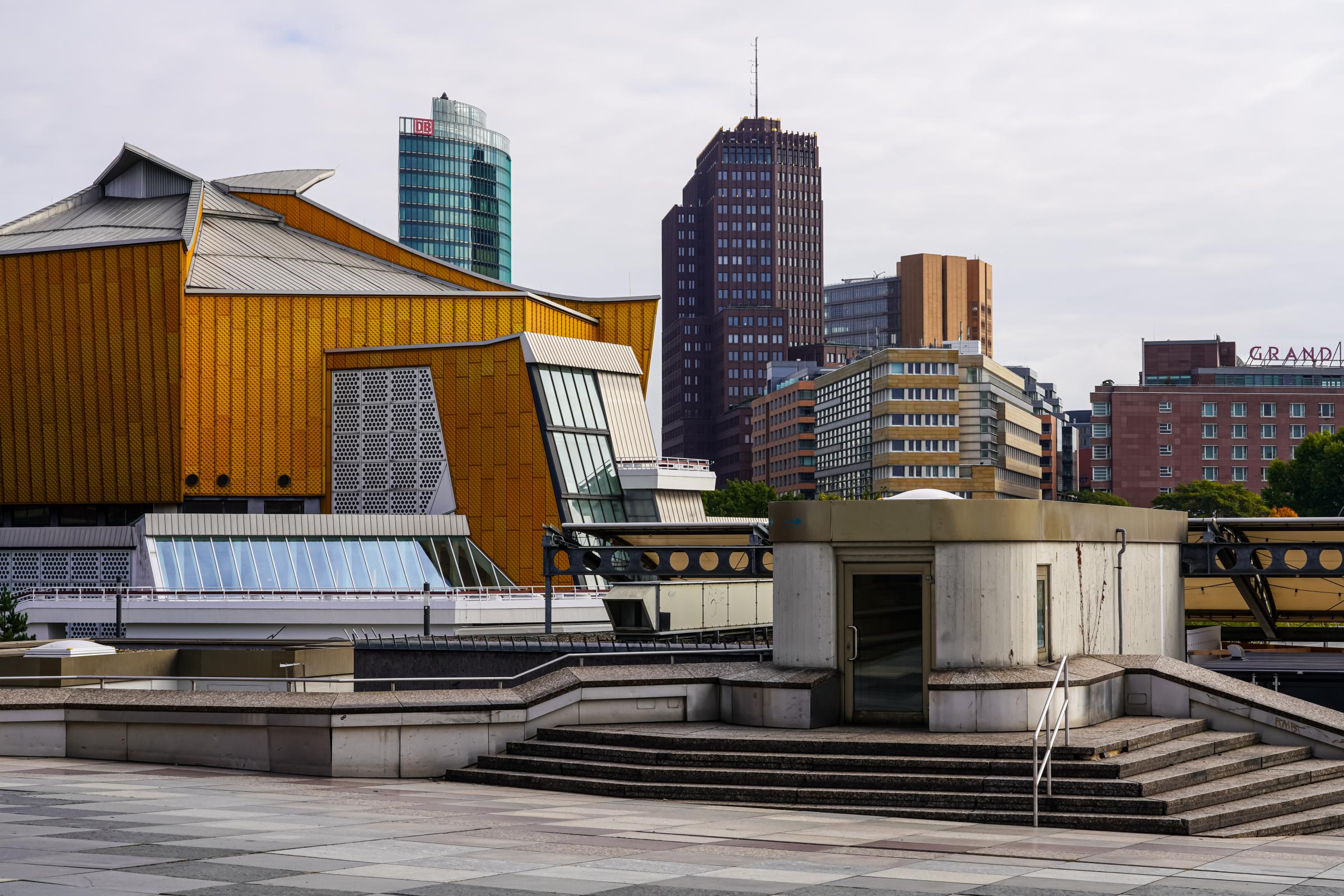 Berlin, Germany
# 3790
4/2022
View from the Kulturforum Berlin to the Philharmonie Building with its golden facade. The Philharmonie lies on the south edge of the city's Tiergarten and just west of the former Berlin Wall on Herbert-von-Karajan-Straße, named for the orchestra's longest-serving principal conductor. The building forms part of the Kulturforum complex of cultural institutions. The Kulturforum in Berlin in the Tiergarten district of Mitte is an urban area between the Landwehrkanal, Großer Tiergarten and Potsdamer Platz, which includes museums, libraries and music halls museums, function rooms and various facilities. 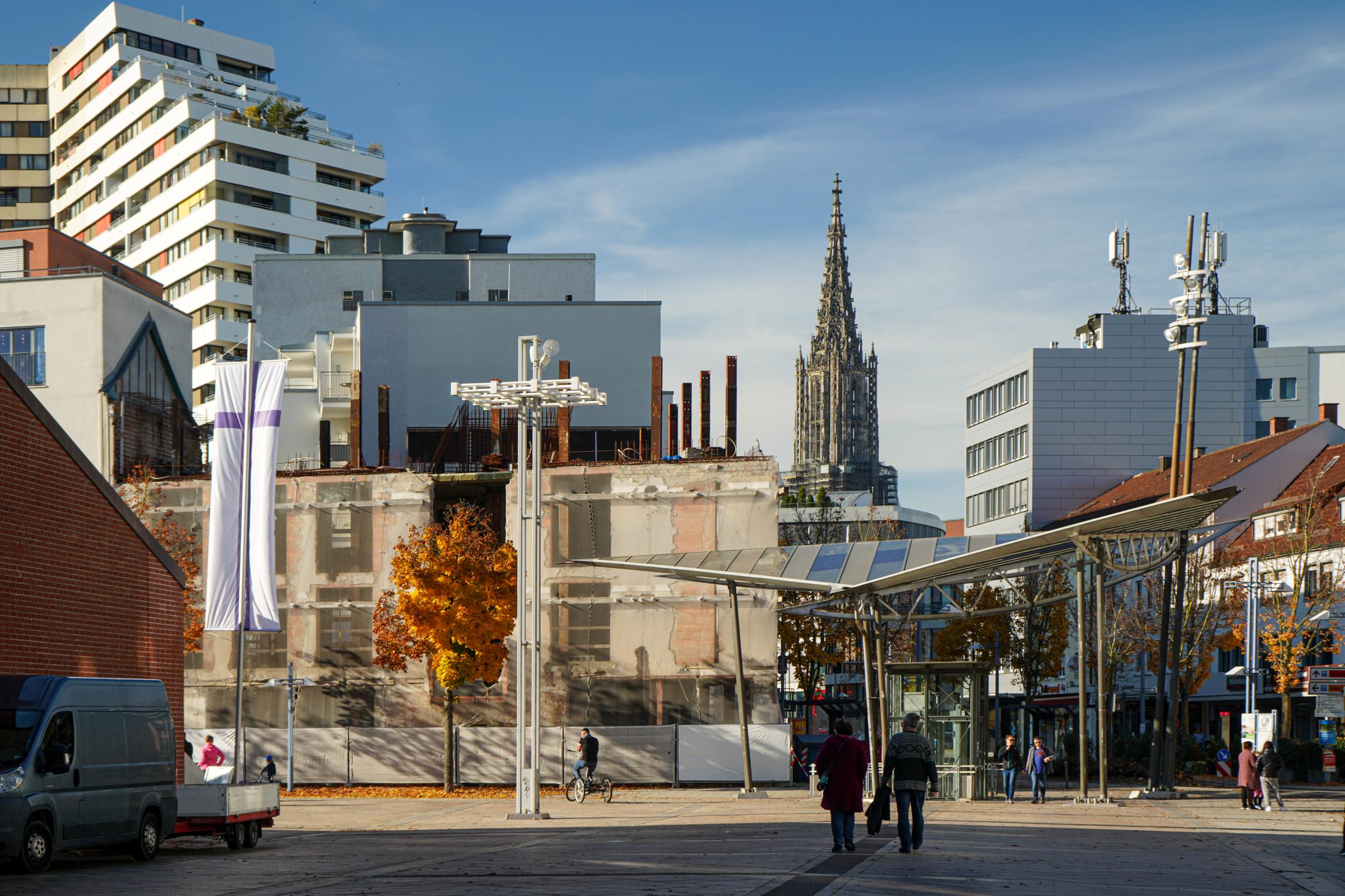 Neu-Ulm
# 2714
11/2021
View onto the cathedral in Ulm (Baden-Württemberg) from a pedestrian zone in Neu-Ulm (Bavaria), in front of it a depressive looking architectural landscape. 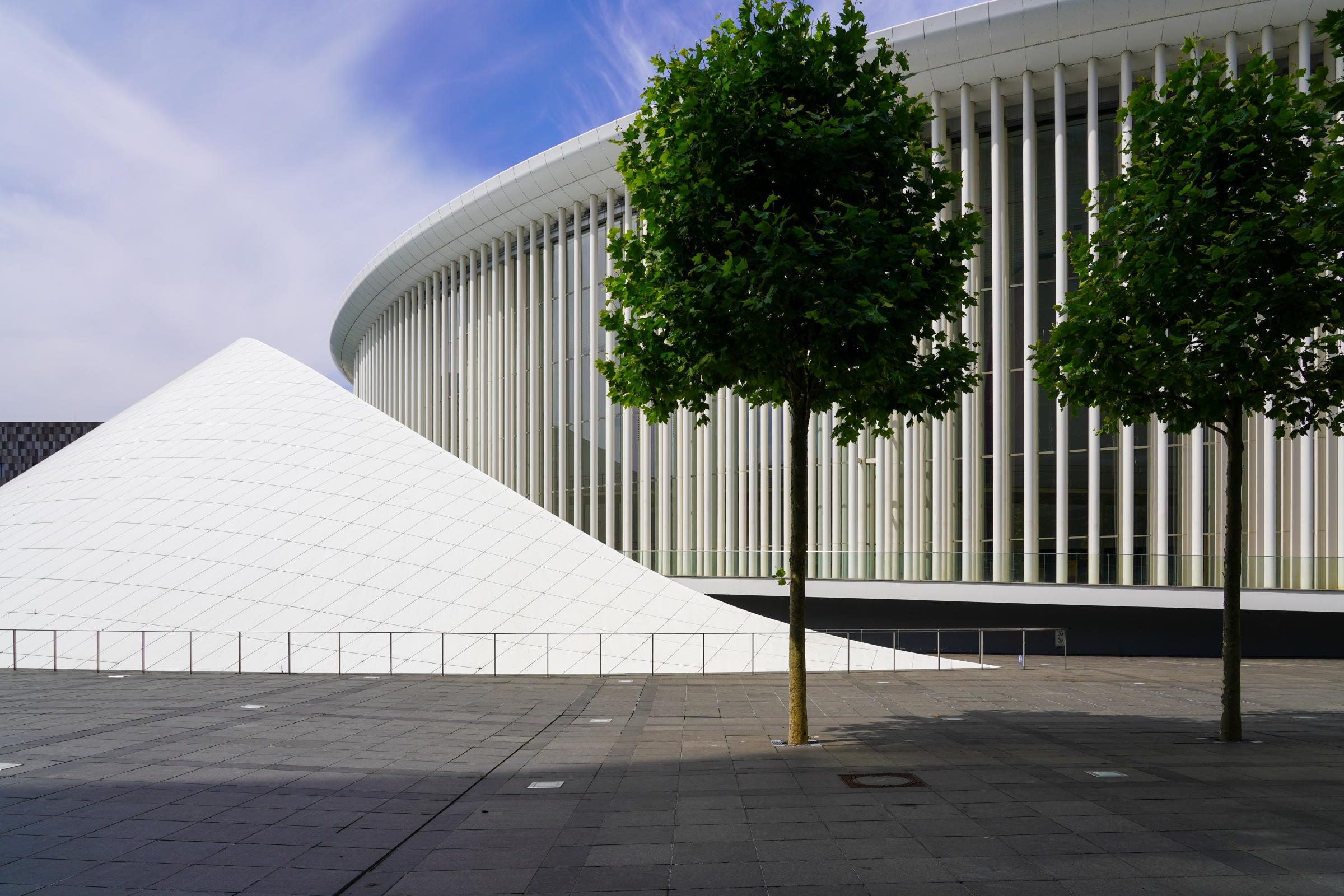 Luxembourg City, Luxembourg
# 3625
8/2022
The Philharmonie Luxembourg is a concert hall in the city of Luxembourg built from 2002 to 2005 in the district Kirchberg at the Place de l'Europe. The architect is Christian de Portzamparc. The white main building has the shape of an eye in plan. The steel and glass facade is visually dominated by 823 white columns 20 meters high and 30 centimeters in diameter. 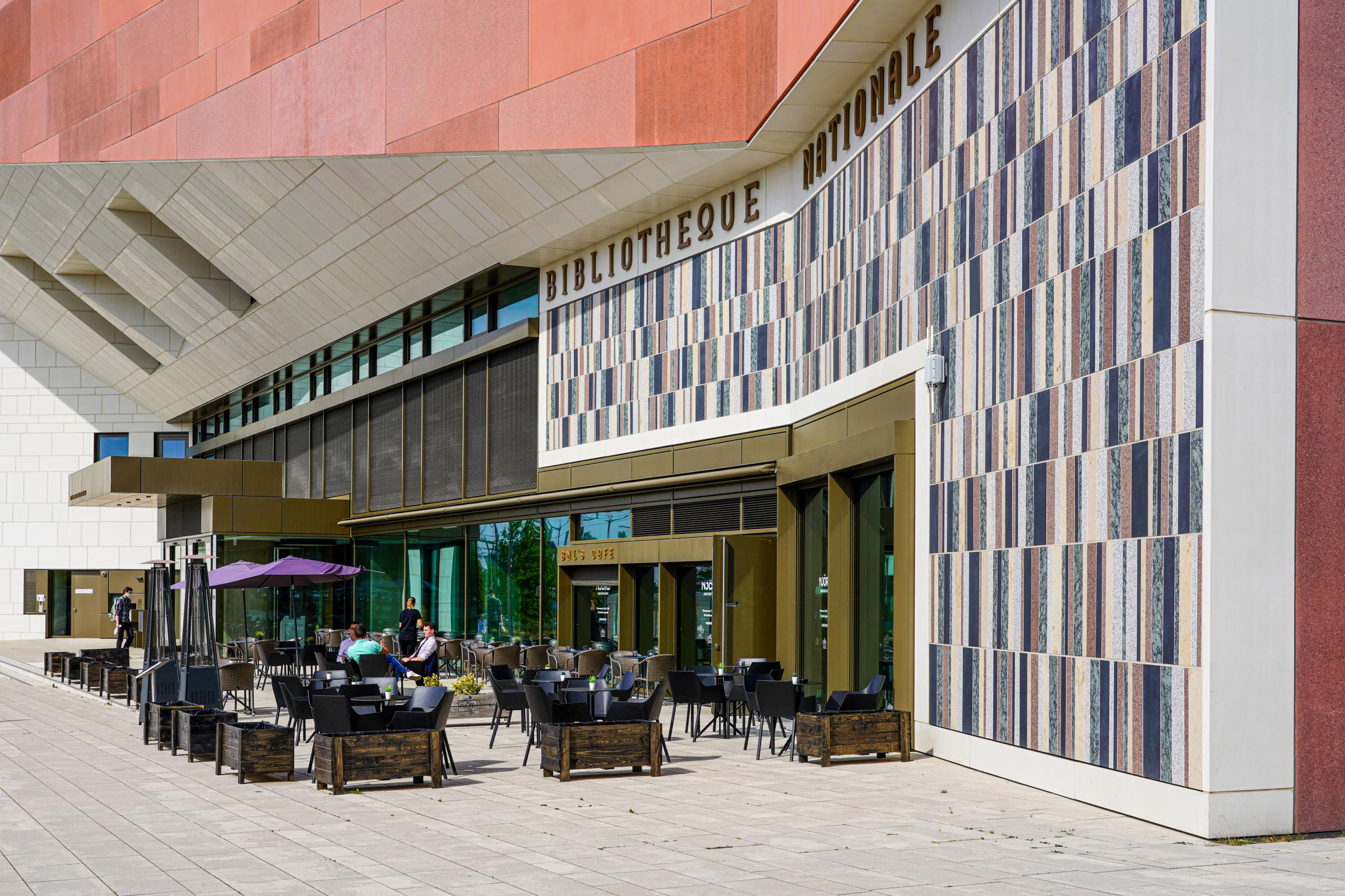 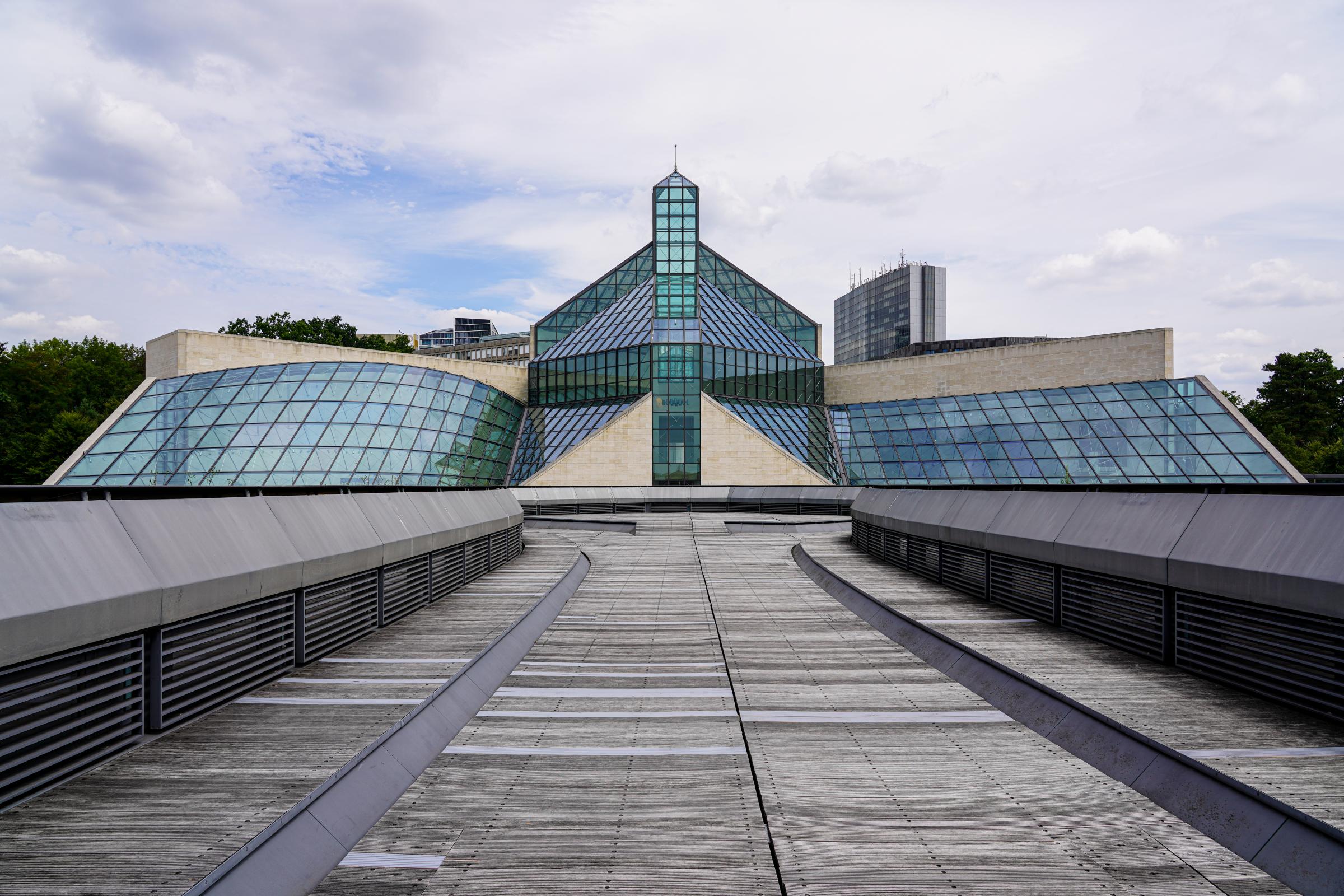 Luxembourg City, Luxembourg
# 3629
7/2022
The Musée d'Art Moderne Grand-Duc Jean, or Mudam, is Luxembourg's museum of modern art. It is located on the grounds of Fort Thüngen (Dräi Eechelen) on the Kirchberg Plateau in Luxembourg City. The architect of the building, which opened in 2006, is Leoh Ming Pei. The museum bears the name of Grand Duke Jean, father of the current Grand Duke Henri. 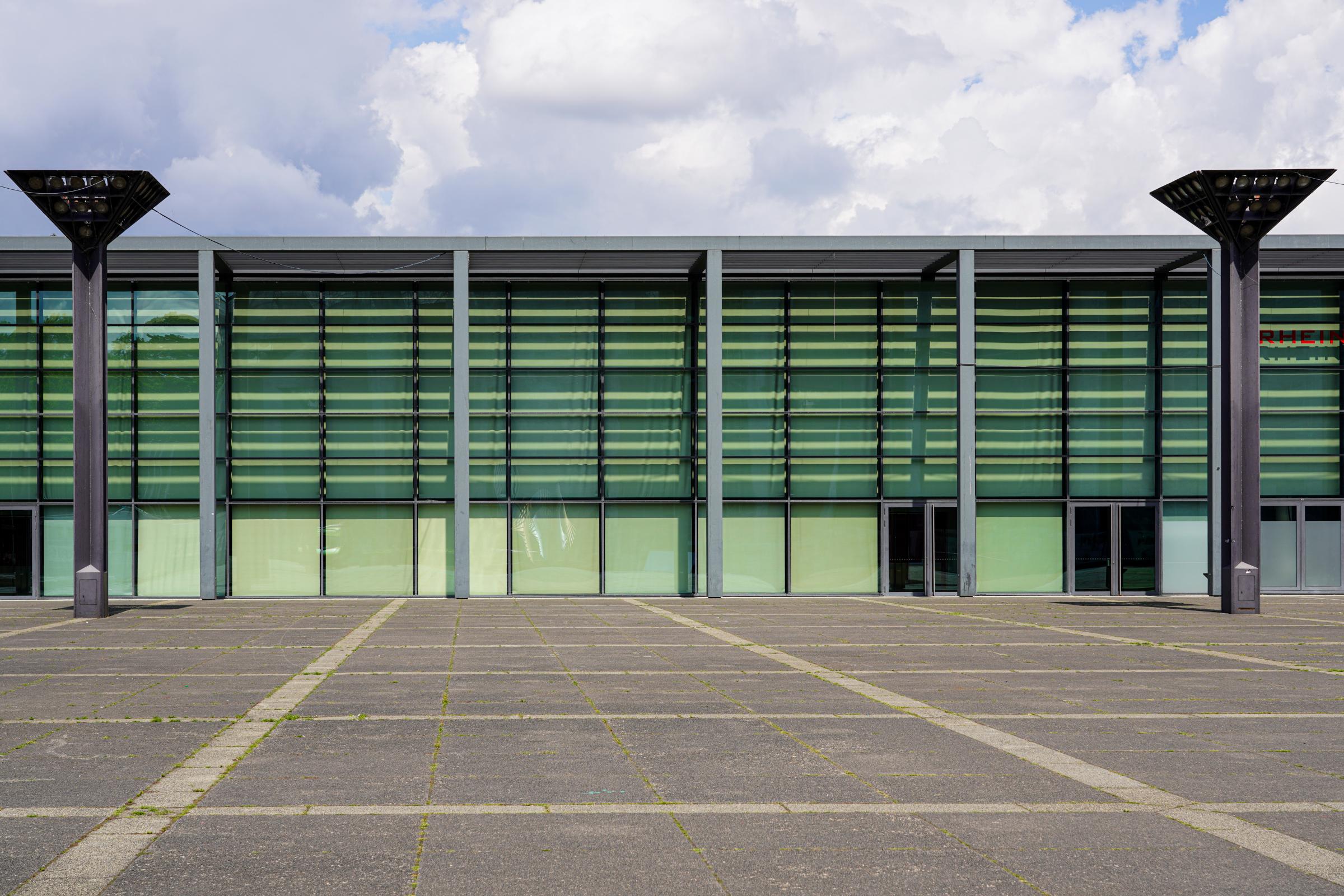 Mainz, Germany
# 3644
8/2022
The Rheingoldhalle in Mainz, a conference and event venue was realized from 1965 to 1968 on the Halleplatz on the banks of the Rhine near the Theodor Heuss Bridge by the Mainz architect Heinz Laubach. 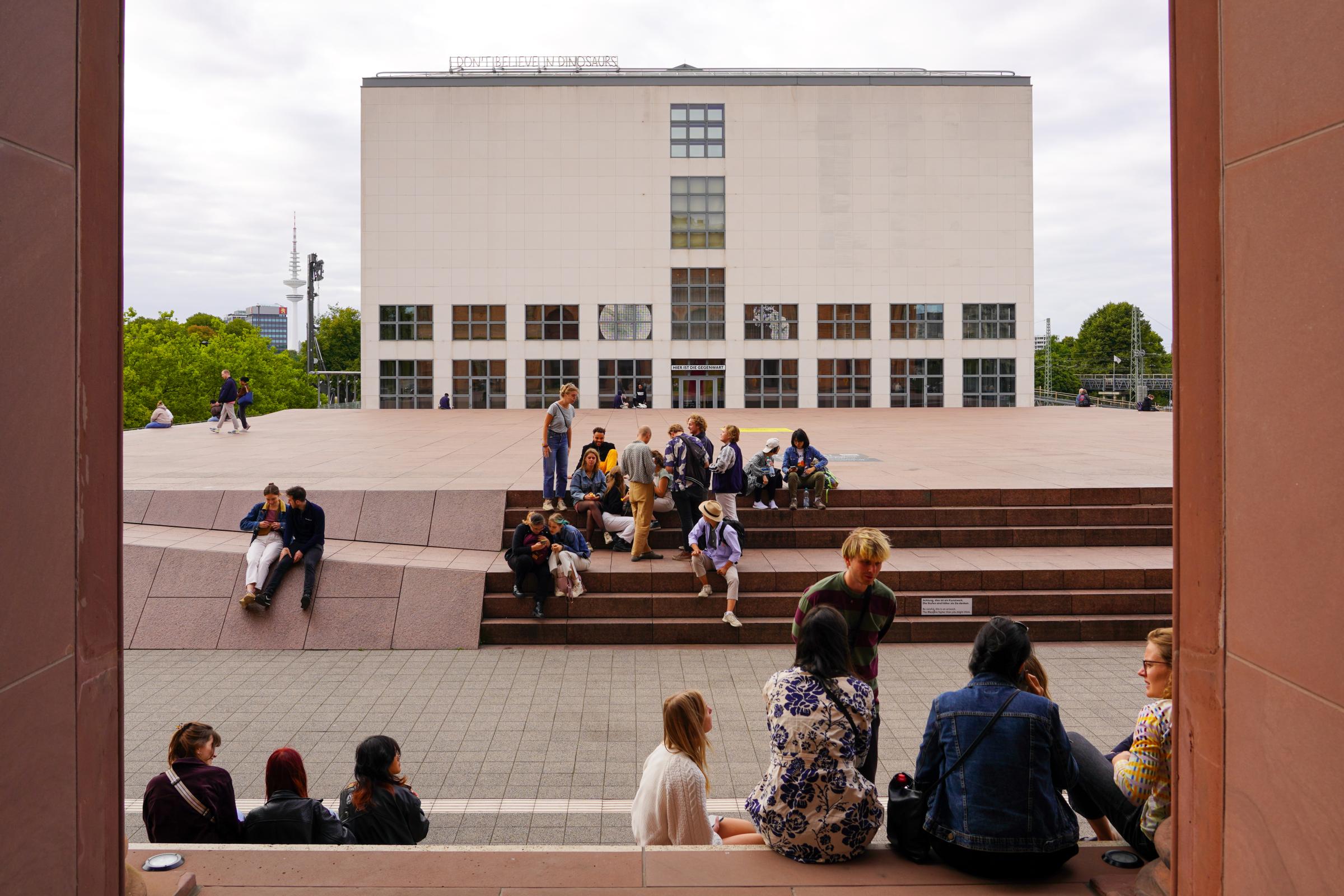 Hamburg, Germany
# 3694
8/2022
People chat at the entrance of the Alte Kunsthalle overlooking the cube-shaped building of the Galerie der Gegenwart. The Hamburger Kunsthalle is home to several important art collections and spans the ages from the Middle Ages to modern and contemporary art. The building consists of three interconnected buildings at the main train station.  The structure of the Galerie der Gegenwart, designed by Oswald Mathias Ungers, consists of a sloped base in red Swedish granite and a cube in light Portuguese limestone. The five-story cube has an exhibition area of 5600 square meters. 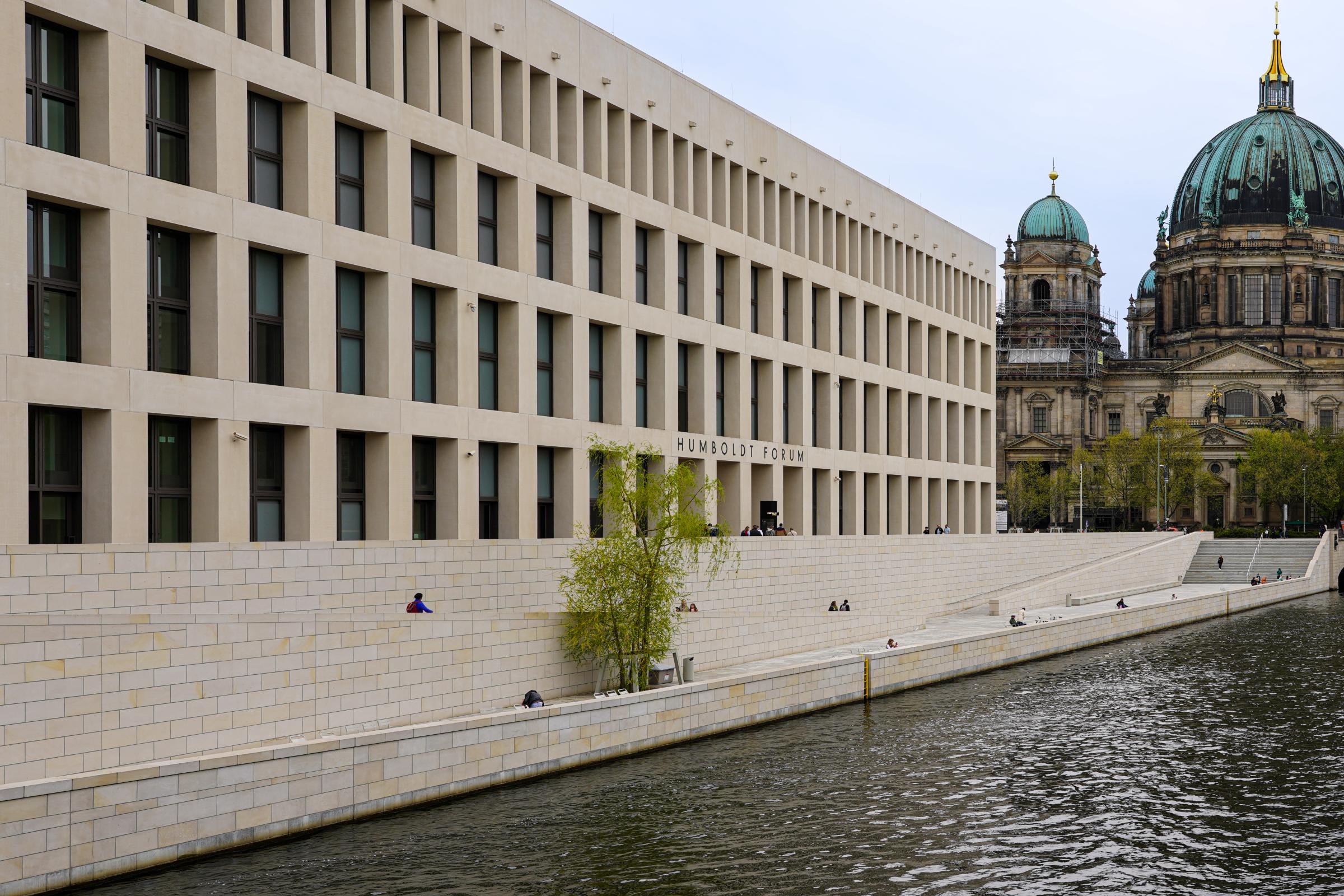 Berlin, Germany
# 3793
4/2022
The Humboldt Forum in the Berlin Palace is a cultural forum and universal museum on the Spree Island in the Historic Center of Berlin. The building was erected after the demolition of the ruins of the Palace of the Republic from 2012 to 2020. 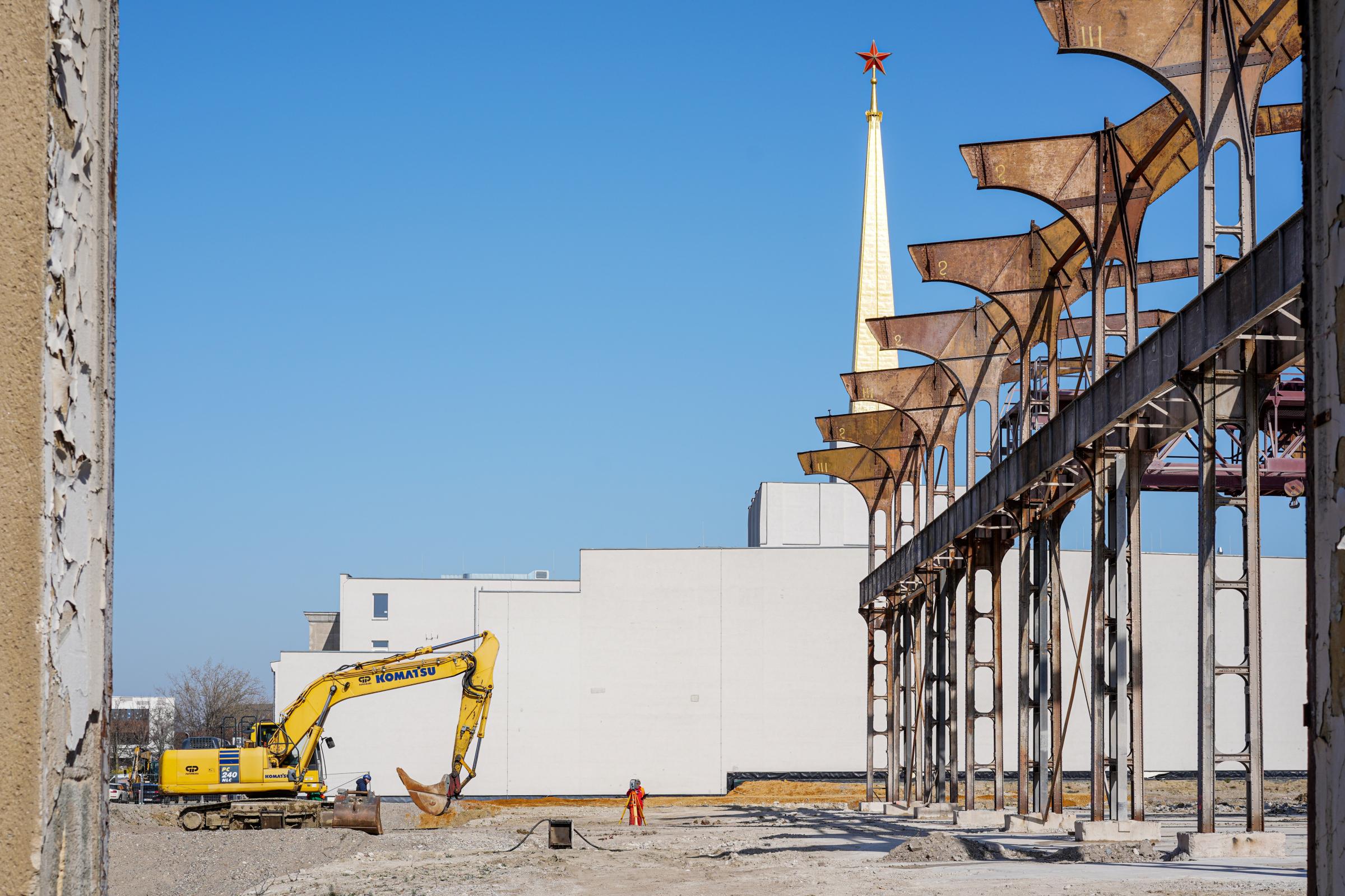 Leipzig, Germany
# 3188
3/2022
Construction site of a new research building and office complex. In the background the Achilleion, it was the exhibition hall 9 built in Leipzig in 1923-1924, whose exhibition hall was also used as a sports palace. The building complex stood on the old exhibition grounds and was severely damaged during World War II. In the early 1950s, it was redesigned as the Soviet Pavilion. Since 2019, after a reconstruction, the remaining head building is used by the Leipzig City Archive. 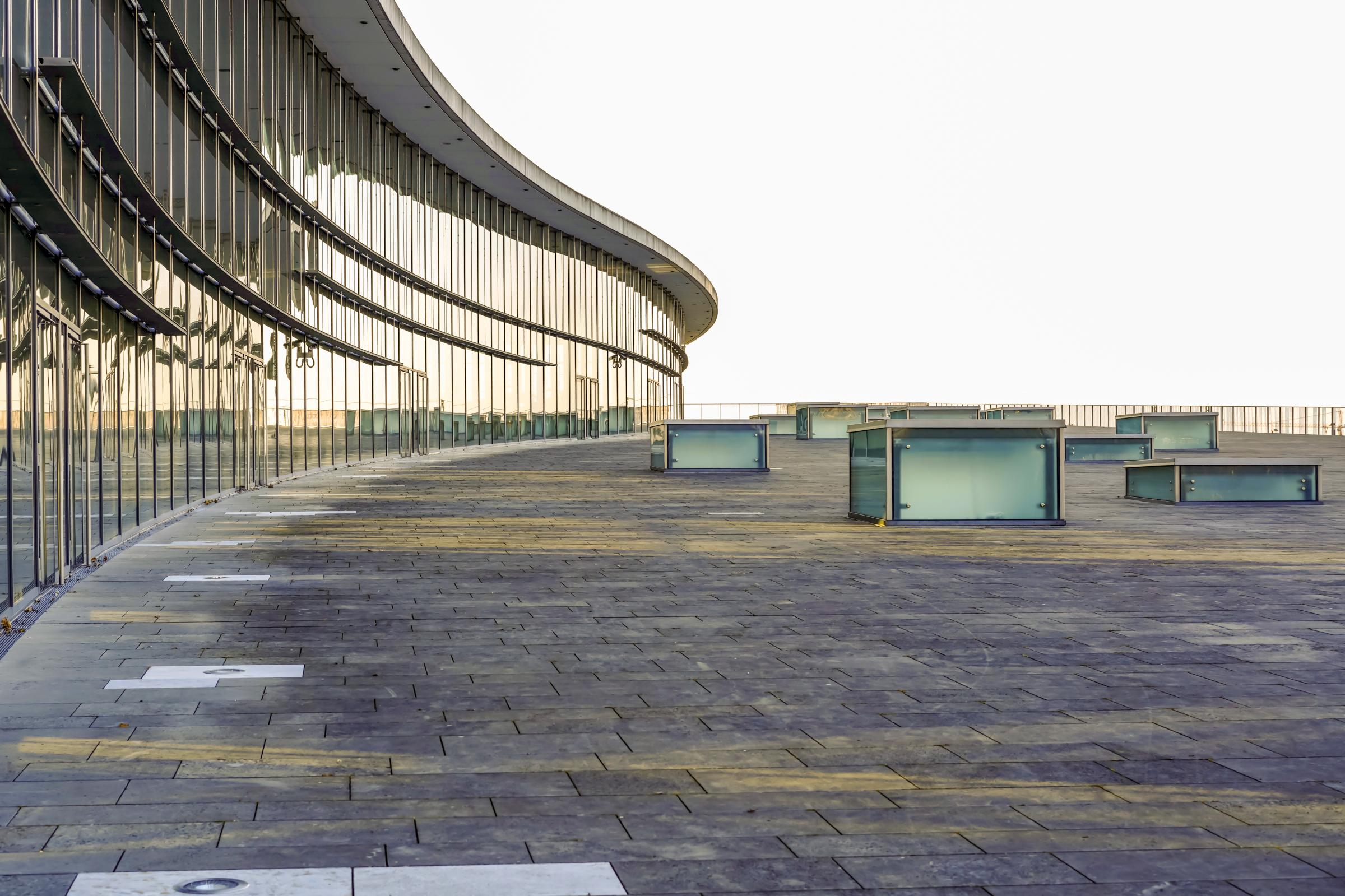 Dresden, Germany
# 3218
4/2022
The International Congress Center Dresden (ICD), designed by the architectural firm Storch Ehlers Partner from Hanover, was opened in 2004. It is part of the Neue Terrasse building ensemble, consisting of the Saxon Parliament, the Erlweinspeicher and the Congress Center. 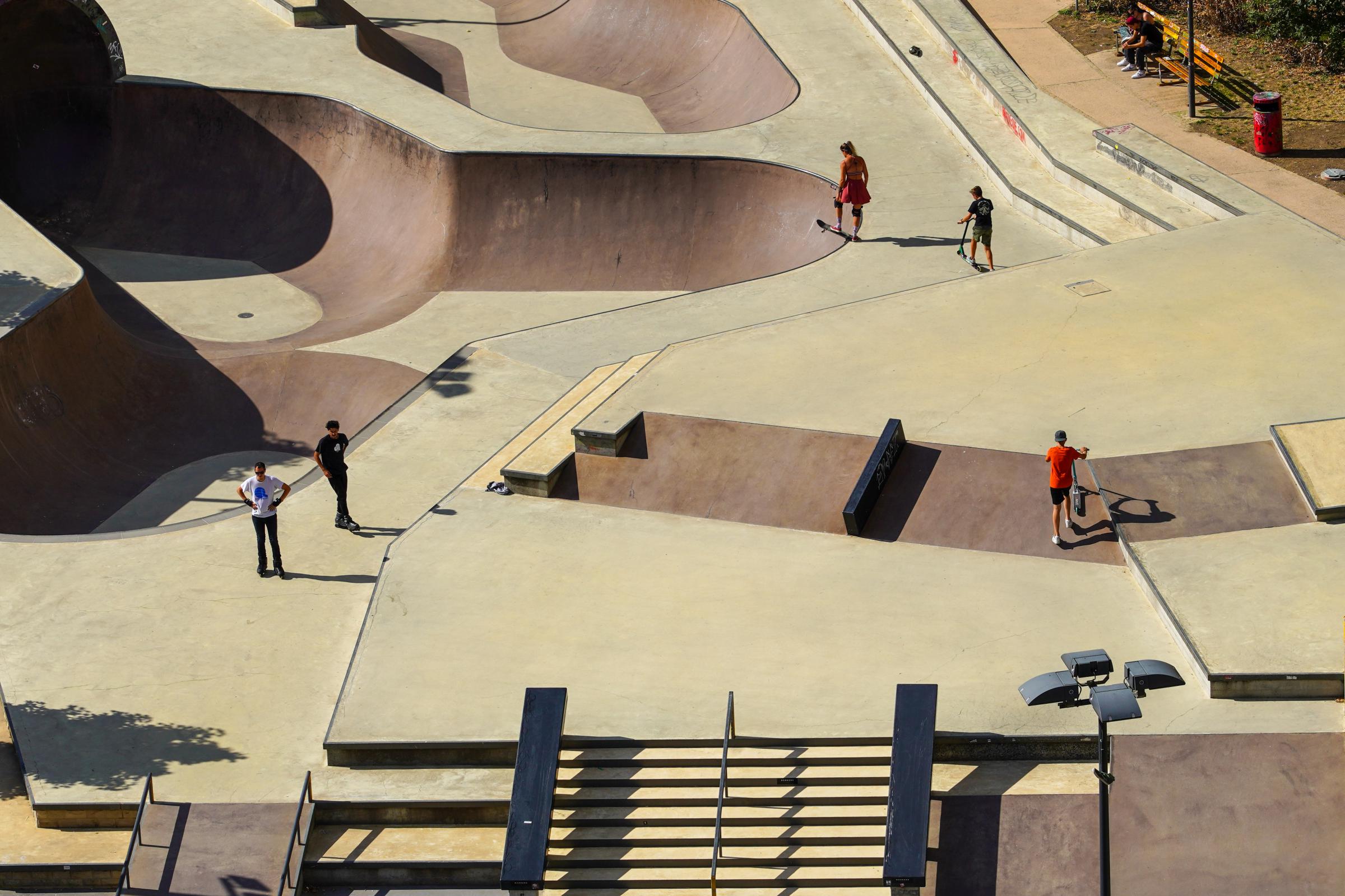 Luxembourg City, Luxembourg
# 3810
7/2022
The city of Luxembourg has created here a 3400 m2 skatepark of high quality and diversity. Located in the Petruss Valley, on Rue Quirin, the skatepark blends harmoniously with its natural surroundings as well as its historical setting. It is embedded in the remains of the old fortification. Design by Constructo Skatepark Architecture.